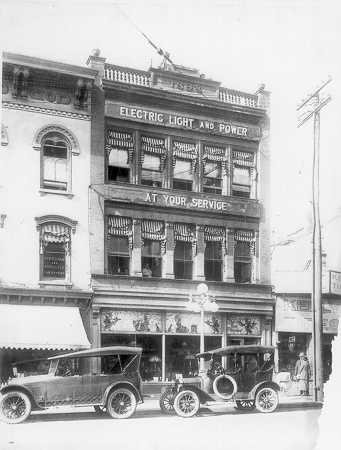 How it All Began 1871-2007
In the mid-1860's, after the Civil War had ended, the social makeup of the Town and Village of Yonkers was in turmoil. Transients with no home or work were flooding our streets, bringing with them many problems for our Town Constables. Local newspapers of the day described these constables as ineffective tools of politicians. The village residents felt that "roughs and rowdies" were taking over the town and something had to be done. A special town meeting was held at Flaggs Hall on July 14, 1866 at 5:15 p.m. A resolution was offered by Supervisor Isaac H. Knox which would allow for the hiring of fourteen Metropolitan Policemen from New York City to come and serve our community in a professional police capacity. $20,000 would be appropriated through taxes to pay for their services. It was hoped that this would be an improvement over present conditions. The citizens passed the resolution by a vote of 76 to 47.

A detail of fourteen men from the New York City Metropolitan Police Force arrived in Yonkers on Friday, August 10, 1866, forming a substation of the New York 32nd Precinct. Headquarters was set up in a building formerly known as Melah's Hotel at 9 Dock Street. The years to follow proved to be busy ones for these "rented" policemen. In 1871, the experiment that began five years earlier proved successful. After a long discussion by the city fathers and town citizens, it was decided that Yonkers should establish and maintain its own police force.

On March 30, 1871, the act providing for the formation of a local police force was signed by the Governor. The detail of policemen from New York City was given the opportunity to return to New York or become part of the new Police Department.

On April 10 the Yonkers Police Force was officially organized consisting of one captain, two sergeants, two roundsmen, eighteen patrolmen, one hostler, and one doorman. The Captain of Police position was given to John Mangin who, as a sergeant and one of the original detail of New York City policemen, decided to stay in Yonkers. The annual salary for a patrolman in Yonkers in 1871 was $750. Any man interested in becoming a Yonkers Policeman had to go through an interview with the Board of Police Commissioners and pass a medical examination by a police surgeon. No written examination was required. The appointment was for life, contingent on good behavior. There was no maximum age limit.

The actual patrolling of the town was accomplished by foot patrol, mounted patrol, and horse and wagon. Mounted patrol was used primarily for outlying areas. In those early years, our police officers put in very long hours every day. Although there were three to four patrolmen working each shift, at the completion of each tour of duty, every man was required to remain at headquarters for an additional eight-hour tour. This second shift was called "Reserve Duty." Beds were kept at Headquarters for sleeping while on reserve duty, and if extra police were needed in a hurry they were right on hand. This eliminated the time-consuming task of an officer going out by horse and wagon to pick up all off duty men for an emergency.

The boundary of the area patrolled by Yonkers in the 1870's was quite different from today. At the time of the organization of the Department, there were two sub-stations. One was located south of Yonkers in the Bronx in the section known as Kingsbridge at Spuyten Duyvil. The second substation was located in Bronxville. In 1874, the Kingsbridge District was annexed to New York City and, therefore, fell under the jurisdiction of New York's Metropolitan Police. However, the Yonkers Police Department continued to patrol the Bronxville area for many years to come.

The Department's size and operation have changed drastically over the years. There are now more than six hundred men and women professionally trained to deal with the problems of today's complex society. It has gone from a footpost and horse patrol department, to an almost completely motorized department. At the Department's inception, the only information tool an officer had was his memory and his notebook. Now complex computers assist in the police function. Over the last one hundred thirty-six years, our Department has progressed far beyond the wildest dreams and expectations of its early members. In an age of rapidly developing technology, one can only wonder what advances will have been made when the Department is two hundred thirty-six years old. No matter the technological advances, the basic purpose of the Yonkers Police Department has remained, and will always remain, unchanged - to serve and protect.