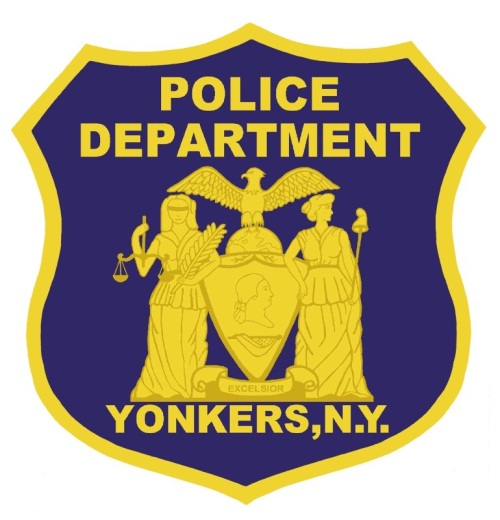 Yonkers, NY – Mayor Mike Spano and Police Commissioner John J. Mueller presided over yesterday’s promotion ceremony which was held in the historic Ceremonial Courtroom in Yonkers City Hall. Twelve members of the Yonkers Police Department were promoted and appointed to positions of higher authority and assignments within the Department, including the Field Services Bureau and Investigations Bureau. The City of Yonkers and Yonkers Police Department also recognized Yonkers resident Pat Quinn, known internationally for his contributions to increasing awareness of the debilitating amyotrophic lateral sclerosis (ALS) disease with the ALS Ice Bucket Challenge; he was appointed to the position of Honorary Police Officer, assigned to the Police Commissioner’s Office. The ceremony was held in the presence of family, friends, and peers. Congratulations to all and best wishes on your new assignments! Additional photos will be posted on the Yonkers Police Facebook page.

The following were promoted to Captain:

The following were appointed to Detective Captain:

The following were promoted to Lieutenant:

The following were promoted, appointed to Detective Lieutenant:

The following were promoted to Sergeant:

The following were appointed to Detective Sergeant:

The following were appointed to Detective:

The following were appointed to Honorary Police Officer: 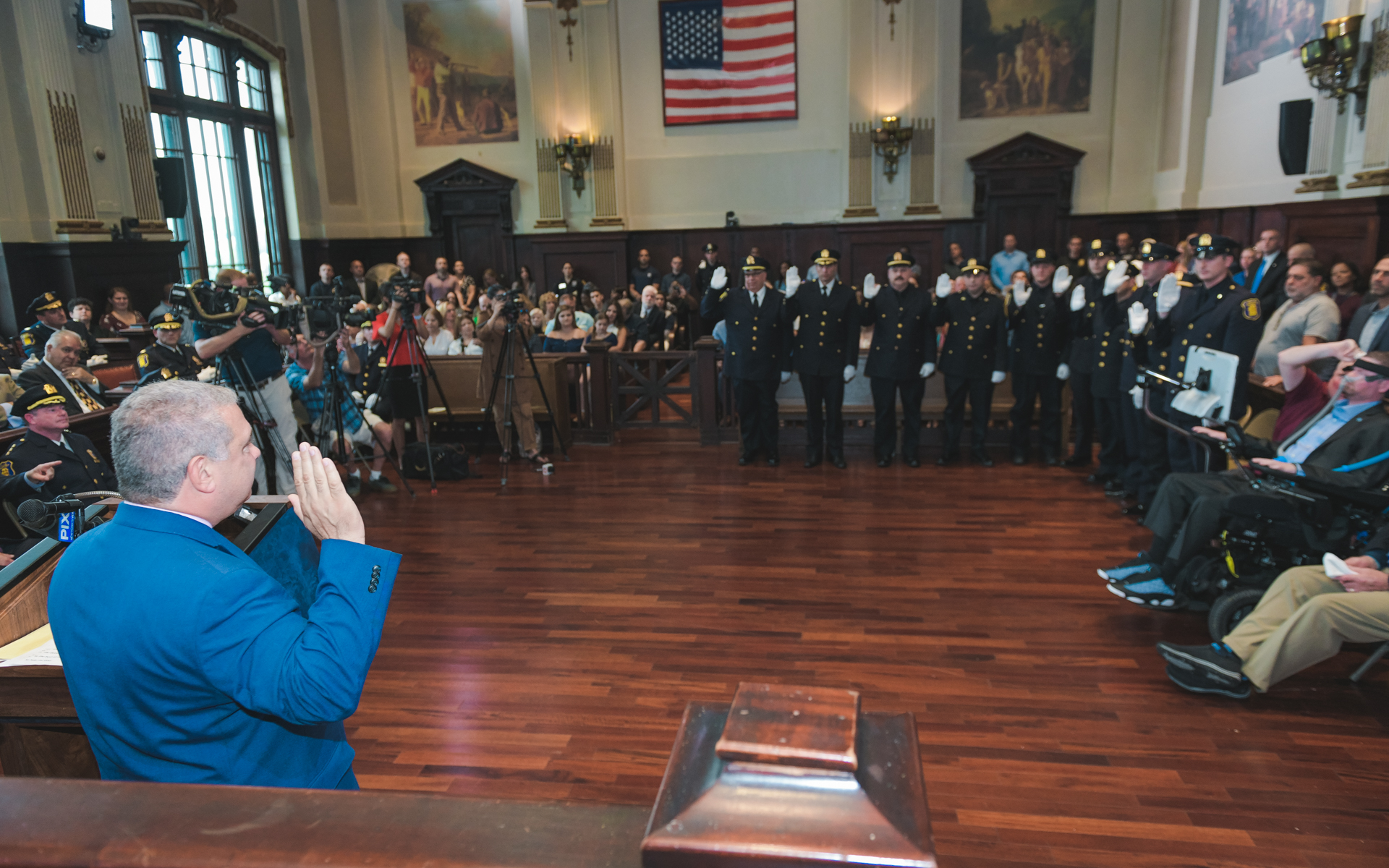 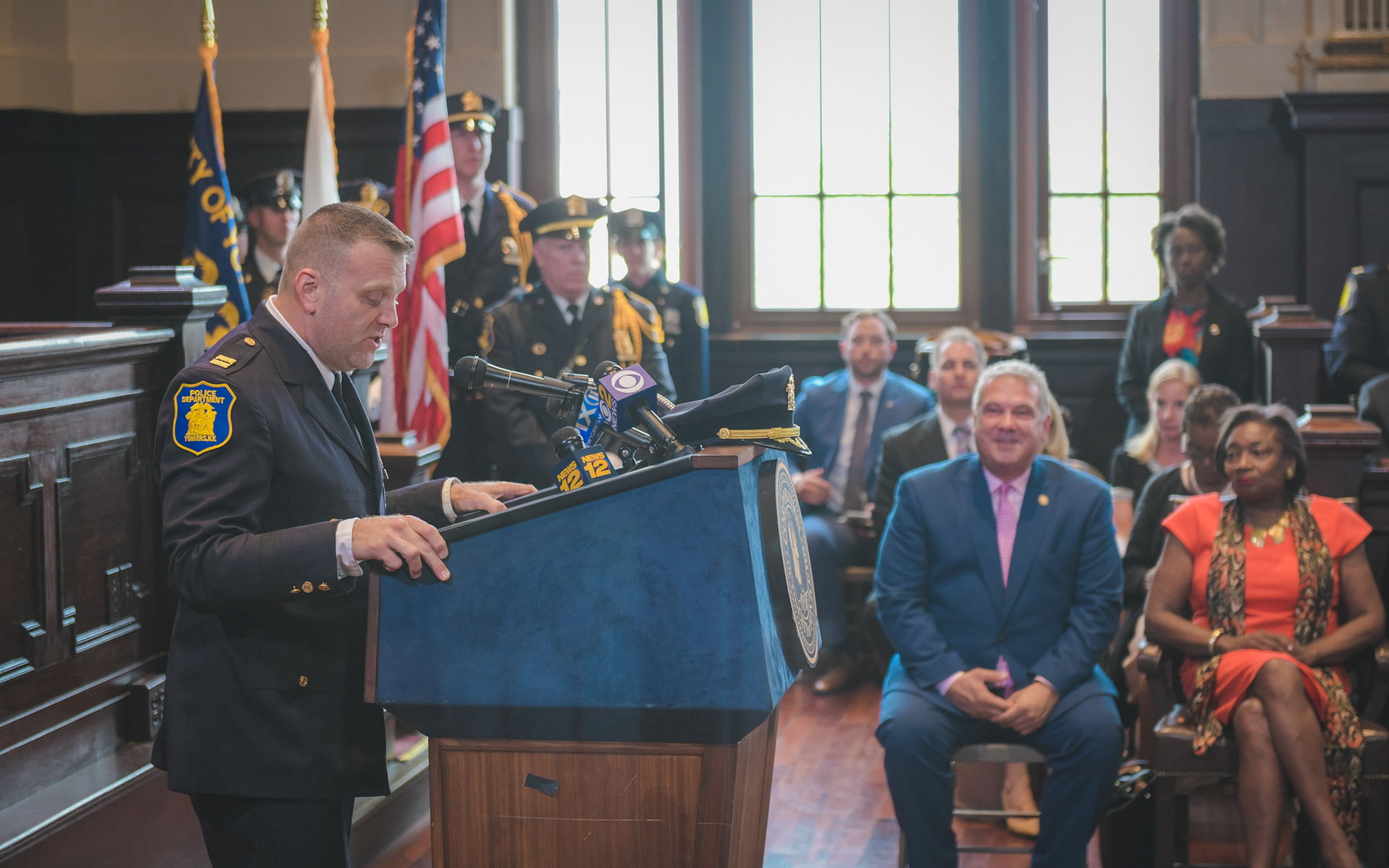 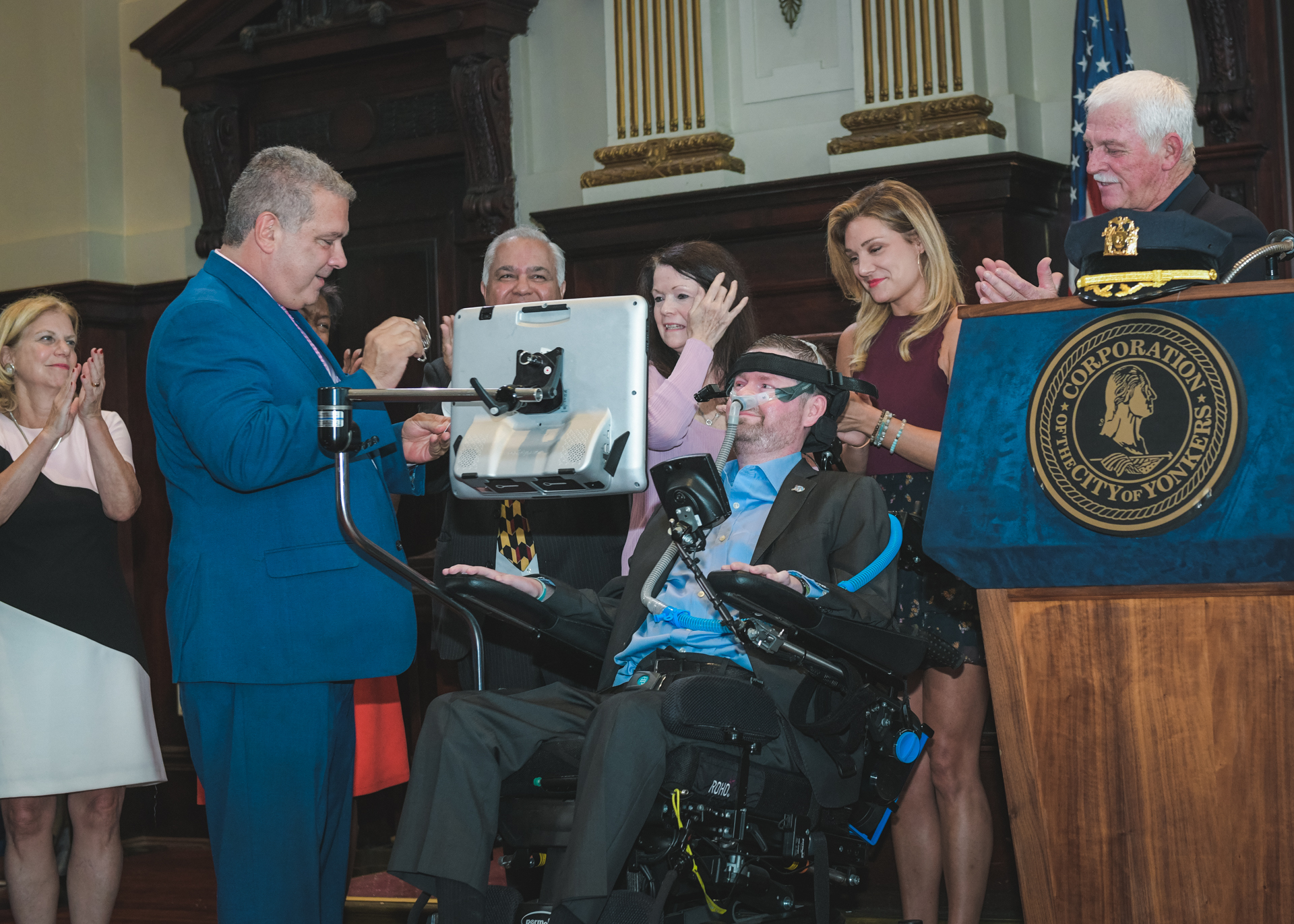 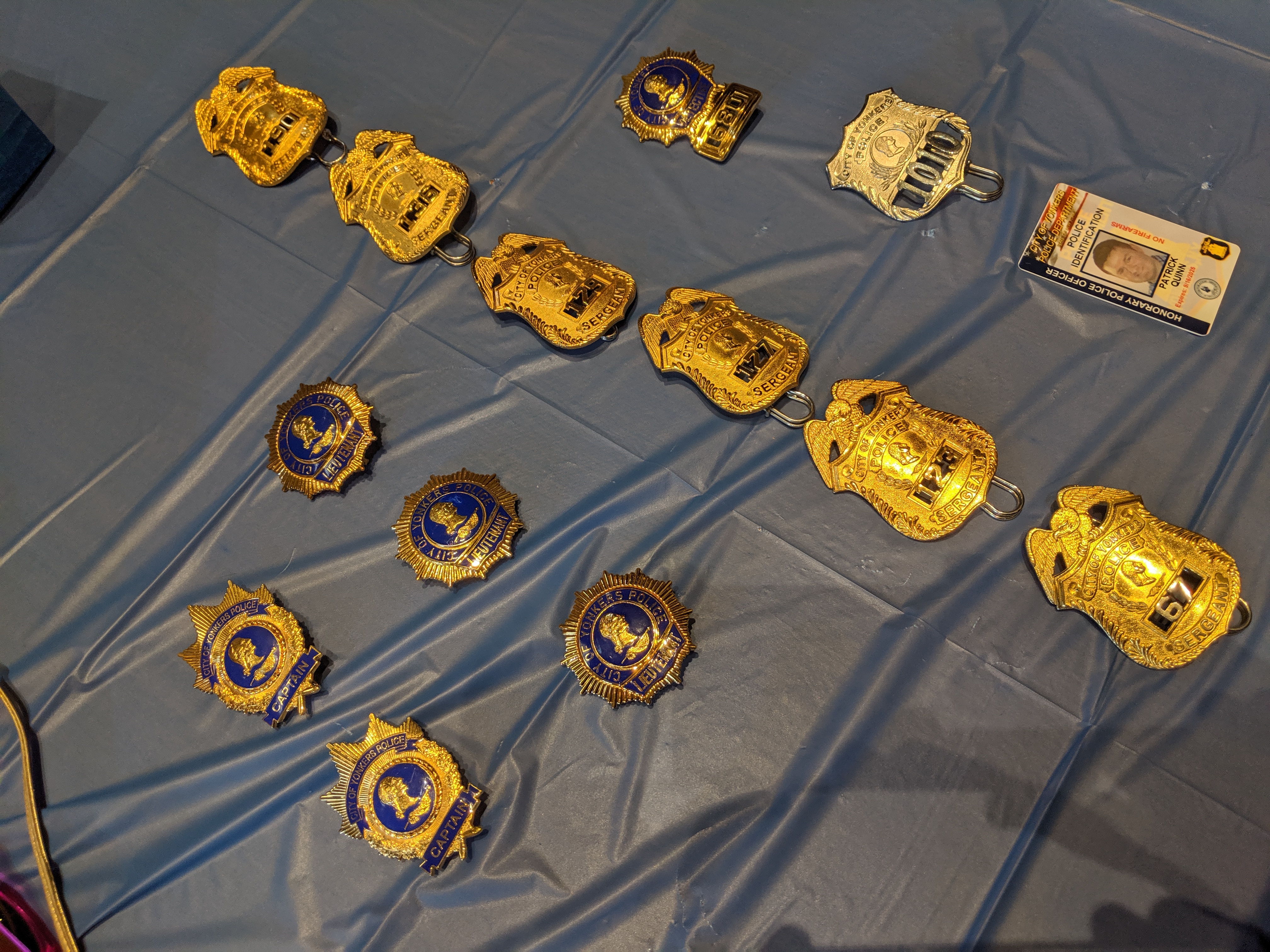 The Yonkers Police Major Case Squad and Narcotics Unit, in collaboration with the NYPD and local law enforcement resources, are actively investigating these deaths and working to identify and apprehend the person(s) responsible for distributing this apparent deadly substance. Community members are advised NEVER to ingest unknown or un-prescribed controlled substances, especially illegal street drugs – the results can be fatal.

If anyone has any information regarding these incidents, they are asked to call the Yonkers Police Narcotics Unit at (914) 377-TIPS (8477). All calls may remain anonymous and confidential. If you or someone you know has a substance abuse problem, please reach out for help – call (914) 964-8000. The City of Yonkers and Yonkers Police Department offers its sincere condolences to the families of the victims

Yonkers, NY – On Friday, September 13th, 2019, at approximately 2:10 PM, members of the Yonkers Police Department were in the area of 1 Mill Street when they were approached by a concerned witness who alerted them to an unconscious female slumped over a baby stroller. The officers approached the female and observed her to be slumped over a double carriage that was occupied by two infants; officers further observed a burnt cigar in the female’s right hand later alleged to be comprised of phencyclidine (PCP) and synthetic marijuana (K2). Officers took possession of the narcotic and attempted to rouse the female to consciousness; after several attempts the female awakened and upon seeing the police stated, “Don’t take my children, I only took a few pulls.” – she was arrested at scene without incident.

The infants, six-month-old twin daughters of the female, were taken to a local area hospital for evaluation with the assistance of the Youth Services Division; they were found to be in good health and turned over to Child Protective Services for case management.

The female is identified as Jessica REYES, a 30-year-old resident of Sickles Avenue in New Rochelle. REYES was booked on charges including Endangering the Welfare of a Child and Criminal Possession of a Controlled Substance 7’, both Class A Misdemeanors in the New York State Penal Law. REYES was arraigned in Yonkers Criminal Court on September 14th, 2019 and is currently in-custody at the Westchester County Jail; she is due back in court on September 19th, 2019. The case is being prosecuted by the Westchester County District Attorney’s Office.

NOTE: Booking charges are merely accusations and the defendant(s) are presumed innocent unless and until proven guilty in a court of law; police photographs are released according to Department policy for specific law enforcement purposes. 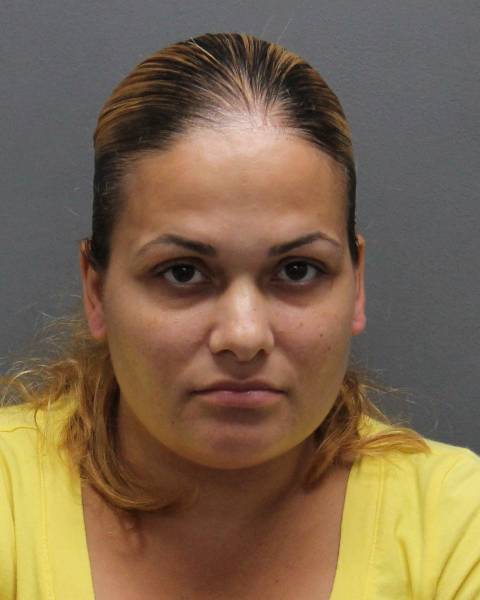 Yonkers, NY – On Sunday, September 8th, 2019, at approximately 1:48 AM, members of the Yonkers Police Department responded to the front entrance of 73-83 Highland Avenue on a report of shots fired. Upon arrival officers located a 12-year-old male victim down on the ground with an apparent single gunshot wound to the neck; first responders immediately rendered medical aid to the boy and transported him to a local area trauma center where is currently undergoing surgery and is listed in serious but stable condition. Officers cordoned off the scene and a criminal investigation was initiated.

Detectives from the Major Case Squad, Crime Scene Unit, and Digital Forensics Unit responded to the scene, interviewing subjects and witnesses, processing forensic and ballistic evidence, and recovering surveillance video. Preliminary investigation has yielded that the victim, who does not reside at the location, was with a group of other young people in front of the building when a vehicle pulled-up on Highland Avenue from which two perpetrators emerged, both allegedly firing a single shot each in the direction of the group which was located some distance away; the victim was struck by one of these shots. The perpetrators then fled the scene in the same vehicle.

Multiple investigators are actively working at this time to identify and apprehend both perpetrators and determine the motivations for this incident; the Yonkers Police Department will commit every available resource towards that end. Detectives and Police Officers will be canvassing the area throughout the day developing information. The victim’s family has been notified and is cooperating with police. The investigation is in the early stages and additional information may be released as it becomes available.

Anyone with information regarding this incident is encouraged to contact the Yonkers Police Detective Division at (914) 377-7724 – all calls will remain confidential. 100% anonymous tips can be sent by texting the key word YPD plus the tip to 847411. Anonymous tips can also be sent to us directly through the Yonkers PD Tips app which can be downloaded for free to any Apple or Android device.

SAVE THE DATE *** Yonkers Police to participate in "National Coffee with a Cop Day" Wed Oct 2, 4PM - 6PM Ridge Hill

October 2nd is National Coffee with a Cop day!

Please join us Wednesday, October 2nd, from 4 PM to 6 PM at the Ridge Hill Town Square for Afternoon Coffee with a Cop! Come meet and talk with your local Yonkers Police Officers and neighbors. Coffee with a Cop brings the local police and the community members they serve together – over a simple cup of coffee – to discuss issues and learn more about each other. We will also have our Mobile Command Center on display and a maybe a surprise visit by one of our K9's! Bring the kids!!

Coffee with A Cop was launched by the Hawthorne (California) Police Department in 2011. Members of the HPD were looking for ways to interact more successfully with the citizens they served each day, and hit upon a simple plan to break through the barriers that have been built over the years - a cup of coffee. In less than five years, Coffee with a Cop events have been hosted in all 50 states and is one of the most successful community oriented policing programs across the country. The program has also expanded to outside the Unites States to Canada, Europe, Australia, Africa, and Latin America.  The key to Coffee with a Cop’s growing success is that it opens the door for interactions outside of the crisis situations that typically bring law enforcement officers and community members together. The Yonkers Police Department is proud to include Coffee with a Cop as part of our many community outreach programs. Hope to see you there, and thank you for supporting the Yonkers Police Department! Cops + Community = Success!! 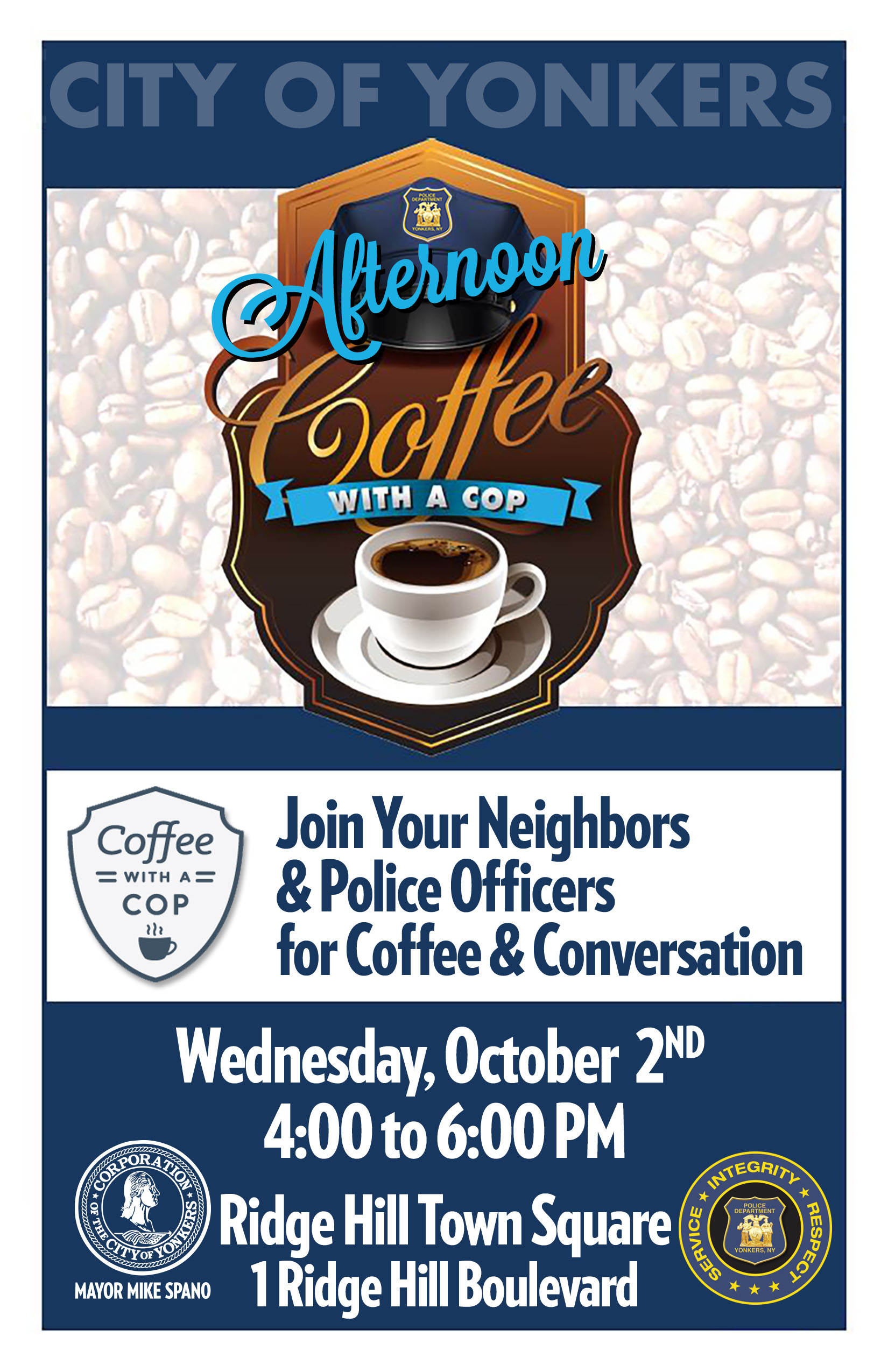 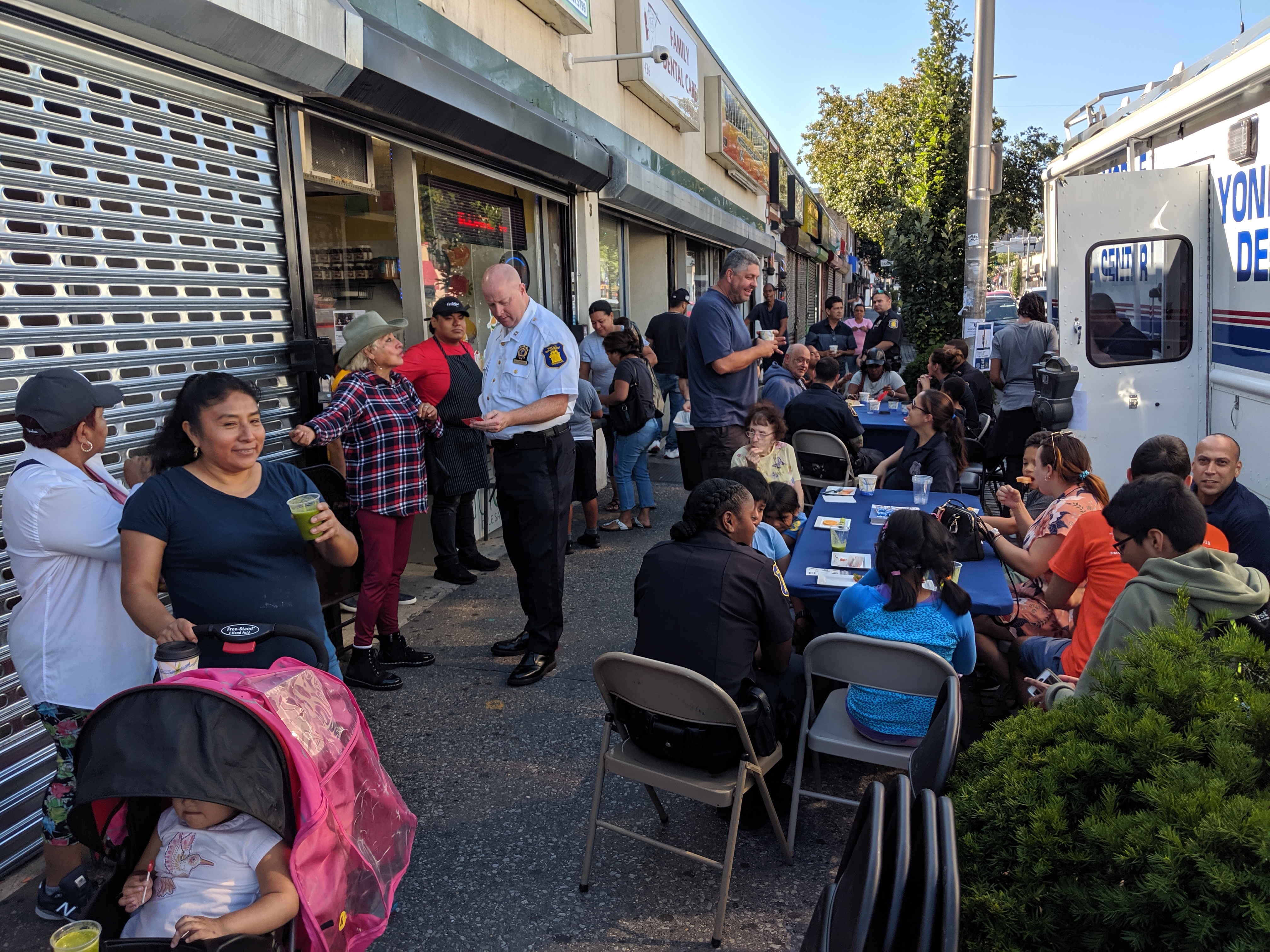 Yonkers, NY – Mayor Mike Spano and Police Commissioner John J. Mueller are pleased to announce today's promotion ceremony which was held in the Grinton I. Will Public Library. Twenty-six members of the Yonkers Police Department were promoted and appointed to positions of higher authority and assignments within the Department, including the Field Services Bureau, Investigations Bureau, and the Support Services Bureau. The ceremony was held in the library’s auditorium in the presence of family, friends, and peers. Congratulations to all and best wishes on your new assignments! Photos will be posted on the YPD Facebook page.

The following were promoted to Captain:

The following were promoted to Lieutenant:

The following were appointed to Detective Sergeant:

The following were promoted to Sergeant:

The following were appointed to Detective:

Also being recognized for prior appointment: 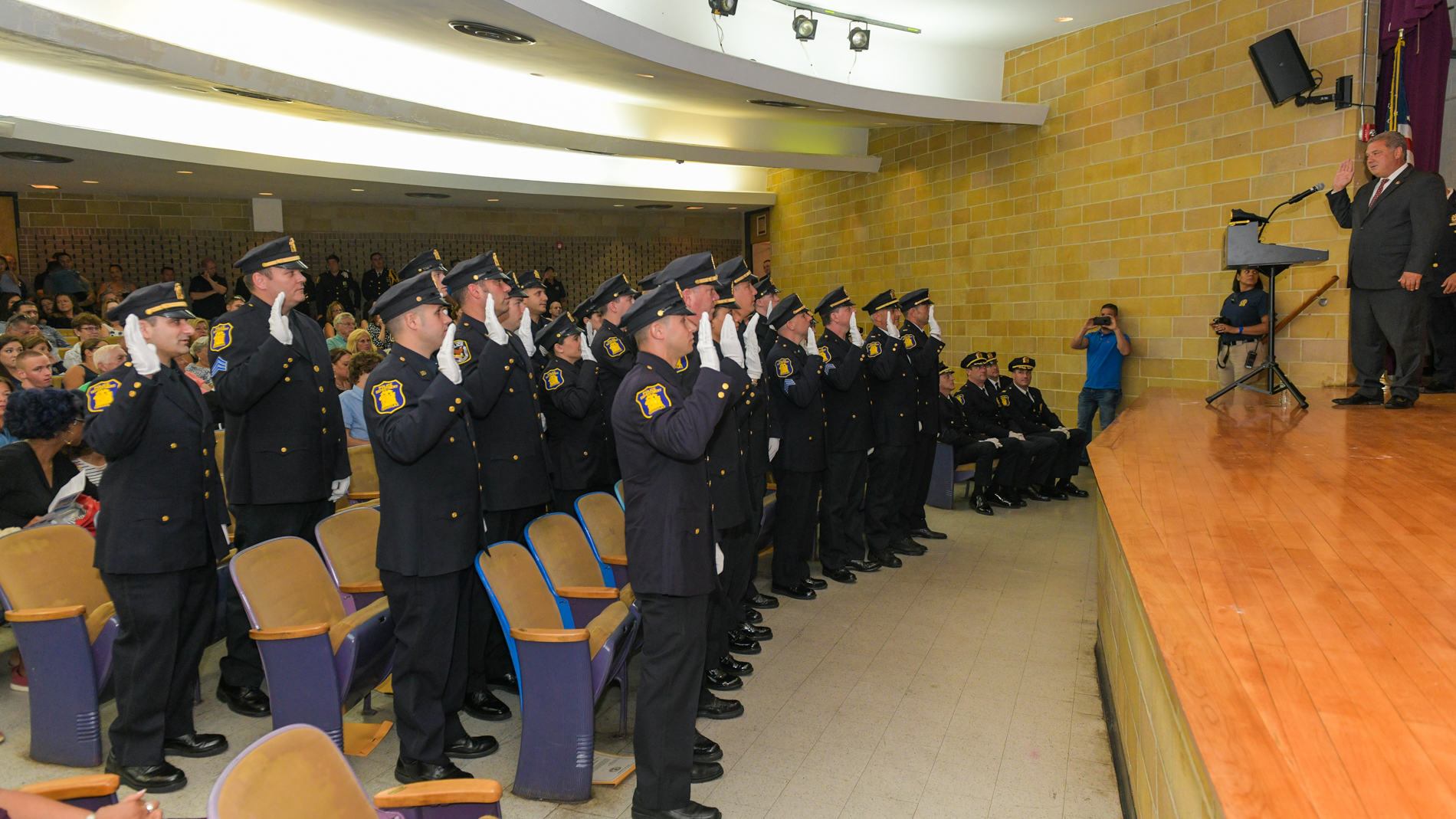 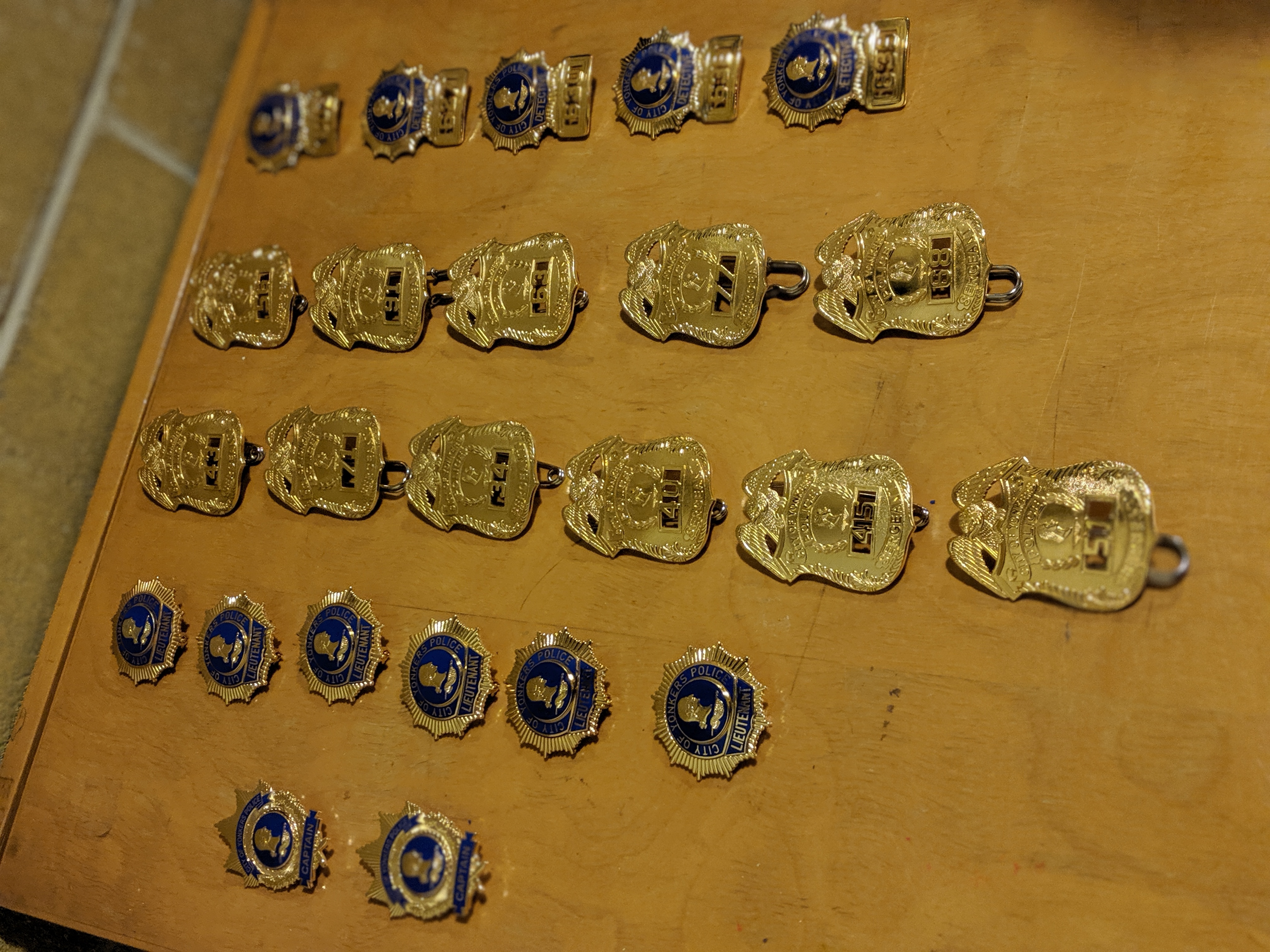 Questions regarding any media release call