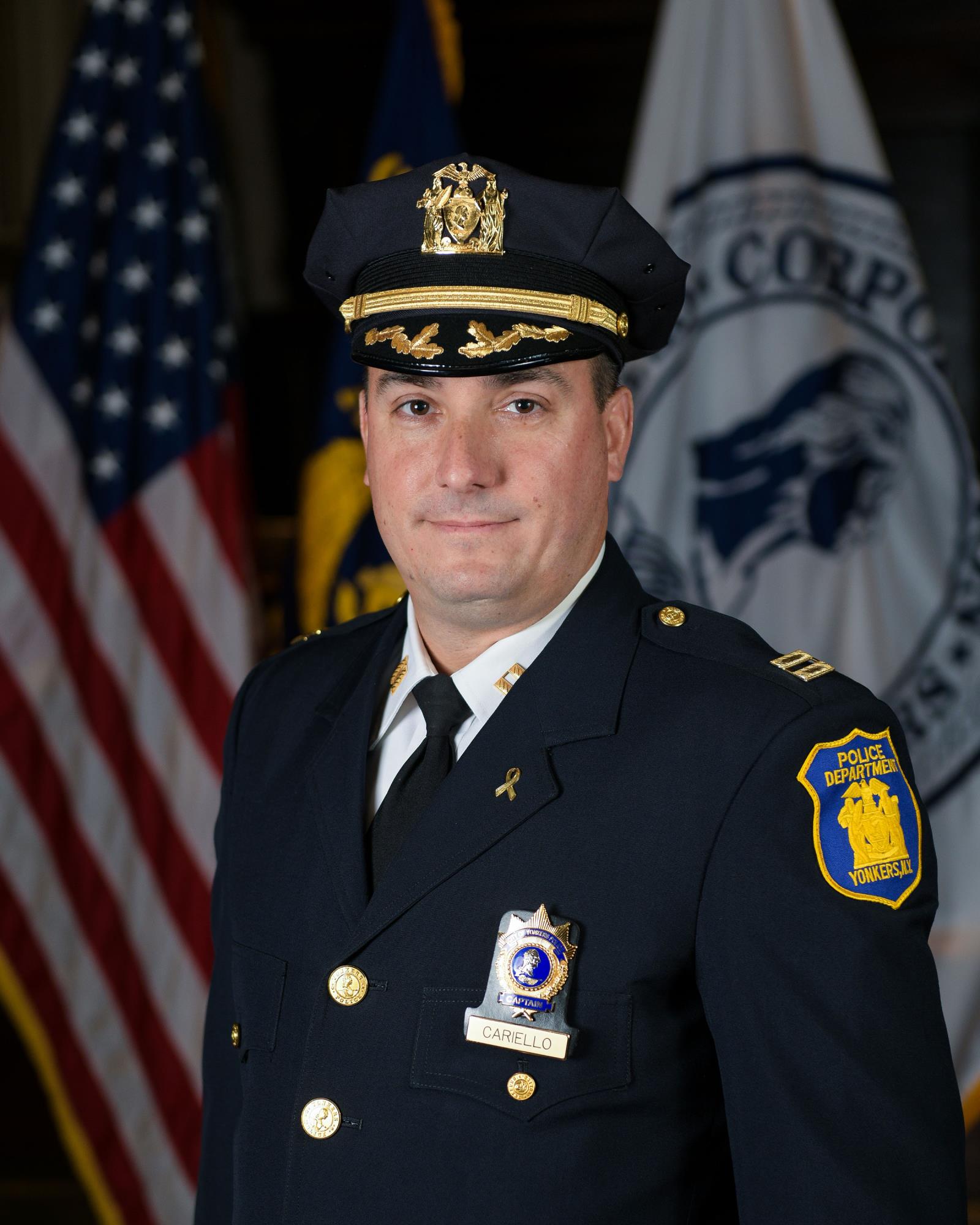 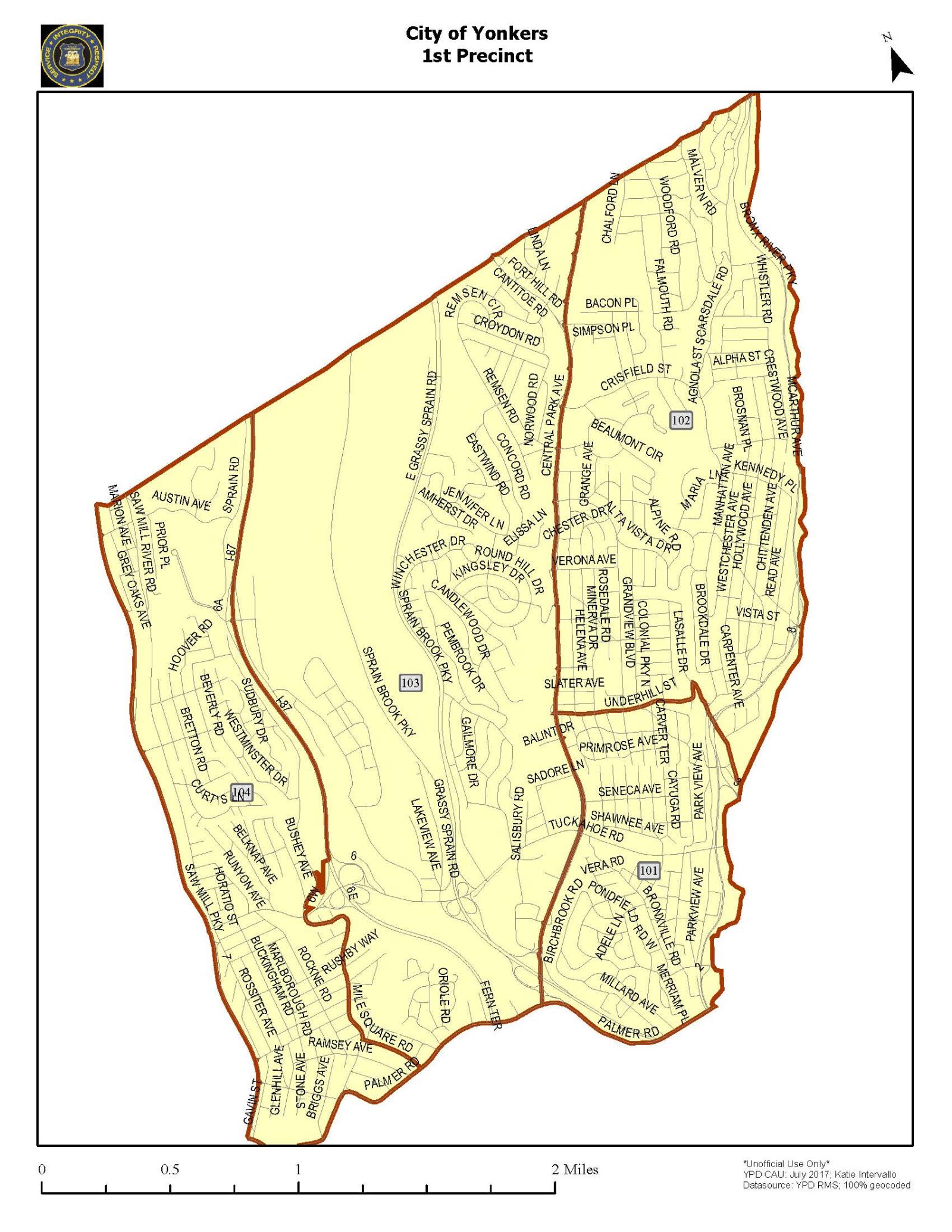 The Yonkers Police Department's First Precinct covers the northeast quadrant of the city. It serves more than 42,000 residents (2000 U.S. Census) and covers an area of seven square miles of residential, commercial and industrial zones.

Major highways and parkways, including the New York Thruway and Sprain Brook Parkway, traverse the precinct. Precinct officers are frequently called to assist at the scene of motor vehicle accidents on these roadways.

The Precinct also serves two of the city's public high schools, twelve public and parochial grade schools as well as several senior citizen housing complexes. There are also city parks and one ice-skating rink within the precinct boundaries.

Among these areas are quiet residential enclaves with homes ranging up to several million dollars in value. Most residential areas in the precinct are well established and have a distinct suburban feel. In most areas, there is little vacant land available for development. Despite this relative lack of vacant land, the precinct has grown rapidly, with areas previously viewed as undesirable or unattainable being developed. Some large estates have been sold in recent years and subdivided into town homes in "gated communities". A similar housing complex is currently in the early stages of development with 42 town homes planned. Most open space on Central Park Avenue has been built upon.

There are 21 neighborhood homeowner associations as well as the First Precinct Community Council that meet regularly with precinct members. These organizations are concerned with preserving the quality of life in their neighborhoods and work with the police on solving problems in the area. Residents have been encouraged to join the neighborhood Watch Program where citizens are trained to keep a watchful eye on their neighborhoods to deter crime. Other crime prevention programs offered are VIN Etching and the "Watch Your Car" Program.

The Ridge Hill area - 89 acres located north of Tuckahoe Road between the N.Y.S. Thruway and the Sprain Brook Parkway - is slated for a massive development with commercial, residential, and entertainment facilities. The population of the First Precinct is expected to jump by 3,000 persons from the development alone. Construction on new roads and the infrastructure is scheduled to start in earnest in the spring of 2007.

Crime and Disorder
Since 2003, the First Precinct has shown double-digit decreases in robberies, assaults, burglaries, larceny, and motor vehicle theft. While violent crime is not unknown in the First Precinct, it is unusual. Most of the reported incidents involve auto-related crime such as grand larceny auto, larceny from auto, and criminal mischief to auto.

Personnel and Facilities
The Precinct is divided into four sectors and is patrolled by marked radio cars and two officers assigned to foot patrol. Regulating traffic in the busy Central Park Avenue corridor is a major component of the patrol officers' duties in the First Precinct.

The First Precinct building is at 730 East Grassy Sprain Road. It houses the precinct, the Special Operations Division, the Training Division. The building was dedicated in 1967 and has been in continuous use since. Renovations were done over the past few years to enlarge and repave the rear parking area, replace the emergency generator system, and repair the central air-conditioning system.

Precinct members regularly meet with community and resident associations to work together on solving problems in the area. The First Precinct Community Council is the largest of these groups. Through these meetings, residents are encouraged to join the neighborhood Watch program where citizens are trained to keep a careful eye on their neighborhoods to deter crime.

The First Precinct wishes to recognize the work and commitment of all officers of the Precinct's many community groups. They serve their residents and provide forums for positive police and community dialogue.