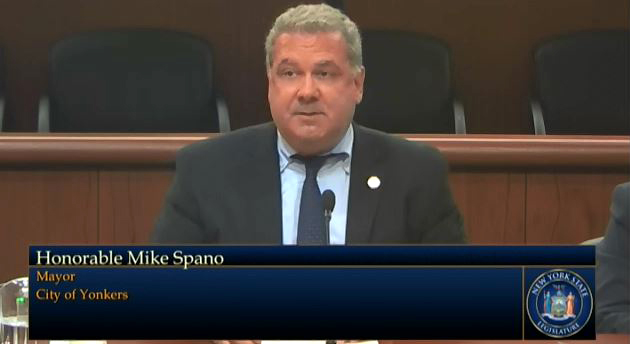 Thank you for welcoming me.

I sit before you today for the ninth time, starting my third term, as the Mayor of Yonkers to talk about the financial needs of our city. Reflecting on my time as Mayor, I can say with little hesitation that my testimony to you today will not change much from years past.

I also will tell you that we continue to succeed despite our challenges.

Over the last eight years, Yonkers has seen unprecedented revitalization. We are a city that is gaining jobs rather than losing them, hitting our lowest unemployment rate in 20 years. We have over $3.5 billion in private investment that has resulted in thousands of new permanent jobs.

With the help of our great Governor and the State Legislature, we’ve improved the fiscal outlook of our city and today Yonkers’ bond ratings are the highest they’ve been in a generation. Once again, graduation rates are up -- now to 88% -- and we are leading the Big 5; the crime rate is the lowest in recorded history; and people are starting to change the way they view Yonkers.

Despite these successes, we have severe needs that can no longer be handled by Yonkers taxpayers alone. Over the years, you’ve heard me speak of the staggering deficiencies that Yonkers Public Schools still face due to necessary cuts in services. If fact, you will hear tomorrow from our Superintendent of Schools, Dr. Edwin Quezada, who will outline the $46.7 million budget shortfall Yonkers Schools face this year. From counselors to arts and music to the threat of the elimination of full day pre- kindergarten, we are deficient with the current resources provided to us.

The current dependency on New York State funding fails to address vital recurring revenue. The reason why Yonkers Public Schools have been able to succeed in certain areas is because of our annual pleas or reliance on one-shot appropriations.

We were grateful last year to receive an injection of $12.6 million in our school budget, thanks to our hard-working Yonkers delegation, led by Senate Majority Leader Andrea Stewart-Cousins. Unfortunately, the proposed Executive Budget cut this funding for us moving forward, so our students are already going into this year’s budget $12.6 million short. In the absence of fully funding our schools, we are left coming back here each year begging to fund us just enough to get by – this is not fair to you or our students.

Yonkers remains the only city to continually increase it local aid to education each year. In fact, since I’ve been mayor, the Maintenance of Effort has increased 18% annually and 68% cumulatively -- even increasing by $12 million just last year. Each year, the City funds the debt and the District keeps the building, textbook, software and library aid reimbursements. Additional transfer amounts include approximately $10 million in the Inter Municipal Agreement merged departments, $5 million in worker’s compensation costs, $8 million in tax certiorari costs and $500,000 in utility costs. This means 71% of Yonkers’ property taxes went towards education.

I come here today to let you know Yonkers has reached its full fiscal capacity. Our taxpayers have exhausted their ability to foot the bill.

A viable option to provide alternate means of funding for our schools is closer than we think. New York is a leader in the gaming industry worldwide and Yonkers is home to one of the most prominent gaming and entertainment destinations in the tristate area, MGM Resorts’ Empire City Casino. With an annual payroll of over $45 million and nearly 1,200 employees, Empire City is critical to the economic growth of Yonkers and New York State as a whole.

This legislative session, I will continue to advocate for the extension of full gaming to Yonkers’ MGM Empire City Casino. Each year, New Yorkers statewide directly benefit from the more than $300 million Empire City generates annually for state education -- despite having a limited gaming license and functioning in a restricted regulatory environment.

We’ve already seen the effects of the absence of full gaming in Yonkers. New Jersey, which is just a short ride from Yonkers, can identify 44% of all its mobile bets are made within two miles of the state border – with as much as 25% of its betting coming from New Yorkers crossing the border. We are willingly sending good, viable education dollars across the river when it can easily be collected in Yonkers.

With 8 million visitors a year, Empire City has proven it can compete and draw tourists and gaming dollars to their facility. Can you imagine what kind of revenue we’ll see if we expand gaming, build out the property, adding a hotel and convention center? The economic benefits for the state cannot be overstated. We cannot wait until 2023.

Should full gaming not be viable in the immediate future, then I ask that sports betting be granted to Yonkers this year. We’ve seen success with sports betting in the upstate casinos – as made evident with this year’s Super Bowl. But we can’t ignore that New York lags behind its competitors when it comes to gaming. Last year, New Jersey hit $300 million in sports wagering revenue. In the six months New York has allowed sports betting, the four upstate casinos brought in a mere $7.8 million. Bring Yonkers into the mix with an enhancement in the local share to offset school funding, and I know it will be a sure bet!

We also need to revisit the environment in which our students learn.

I’ve come here now for five years in a row to speak to you about the physical conditions of our schools. I’ve outlined for you the deplorable environments in which many of our students are required to learn. Our schools are 4,500 seats over capacity for a district size of 27,000 students; and that nine of our schools are over 100 years old. Simply put: there is and continues to be a capacity and infrastructure crisis in Yonkers Public Schools.

While I appreciate the tools given to us to date, it’s not enough. The Double MCA will only cover part of the construction of three new schools.

We have identified property at the former St. Denis School site to construct a new community school for grades pre-k through 8. However, this is being done through City funding. We bonded for the purchase and need to plan for an additional $2 million for architectural and other costs. Our plans to potentially build two other schools for our overcrowded district will come to a screeching halt without state assistance beyond the standard reimbursement.

Plus, no legislation even comes close to addressing the other schools that need to be rebuilt or addresses the 15% overcapacity of our schools and deplorable conditions in which our children learn.

Making temporary repairs to keep schools operating is not a choice. The school system has 21 capital projects on the books at an expected cost of $29 million. There are also 33 projects in design at a cost of about $120 million. If those numbers sound high, consider this: a 2015 survey of all capital needs at Yonkers’ 40 schools showed 27,000 items needing to be addressed. The cost of addressing them all would be about $567 million. This is not sustainable - Yonkers alone still cannot afford to rebuild these schools on our own.

In the absence of any change in the formula, I ask that a Capital Block Grant of $100 million be made available to Yonkers to offset local taxpayers’ share of this project. While it will not completely cover the cost, it will make this ever important capital improvement plan to our schools more affordable.

Our students cannot wait. It is time to rebuild Yonkers schools.

We’ve touched upon the needs of our schools, but we also must not neglect the costs of running the largest city in the Hudson Valley.

Despite Yonkers’ growing economy and stronger revenues, we estimate our 2021 budget shortfall to be approximately $40 million. Our budget grows each year to pay for a workforce which makes up 75% percent of our budget. Over the past 10 years, fringe benefits have grown 79%, or $77 million per year.

We also continually have to deal with the influx of unfunded state mandates which are passed down to us, including the newest ones like bail reform and raise the age. Training and overtime costs associated to these mandates put an unfair strain on our budgets, especially to our Yonkers Police, estimating to nearly an additional $1 million annually.

We also must address the proposed recreational marijuana legislation. The way it stands now, no local government will see any share in revenue, but we will take on all the responsibility. Why should the revenue stream stop at the county level, leaving out cities like Yonkers? We are the boots on the ground. The state needs to recognize the responsibilities of the Big 5 and include us in the benefits of this new legislation.

Over the last eight years of my Administration, we’ve been frugal with our spending. We’ve instituted hiring freezes, we’ve increased revenues and we’ve merged departments. We’ve even sold off $47.8 million in property over the last ten years to plug our hole. Selling off property is what’s kept us afloat, but that well will run dry very soon. We also have approached our Constitutional Taxing Limit over the past several years causing the State Comptroller to classify our fiscal situation as dangerous.

How do we address this? It starts with AIM. Over the years, municipalities have taken a big hit when it comes to AIM funding. Ultimately, we are doing more with less. In the face of flat AIM funding and rising costs, we are without options.

Now is the time to increase AIM funding and to revive the partnership between the State and the cities. Short of the increase in AIM aid, I ask you to propose and pass legislation that relieves local communities and provides appropriate funding to the mandates that we have no other choice but to enforce.

YONKERS IS LEADING THE WAY

Yonkers has come a long way in the last eight years. I believe Yonkers is a city on the move and leading the way for others to follow.

With the help of our great Governor and the State Legislature, we’ve made amazing strides in changing the face of Yonkers. We’ve already seen amazing returns on your investments. Together, let’s keep moving Yonkers forward.

I look forward in continuing to work with you and Governor Cuomo.