Thank you for welcoming me. 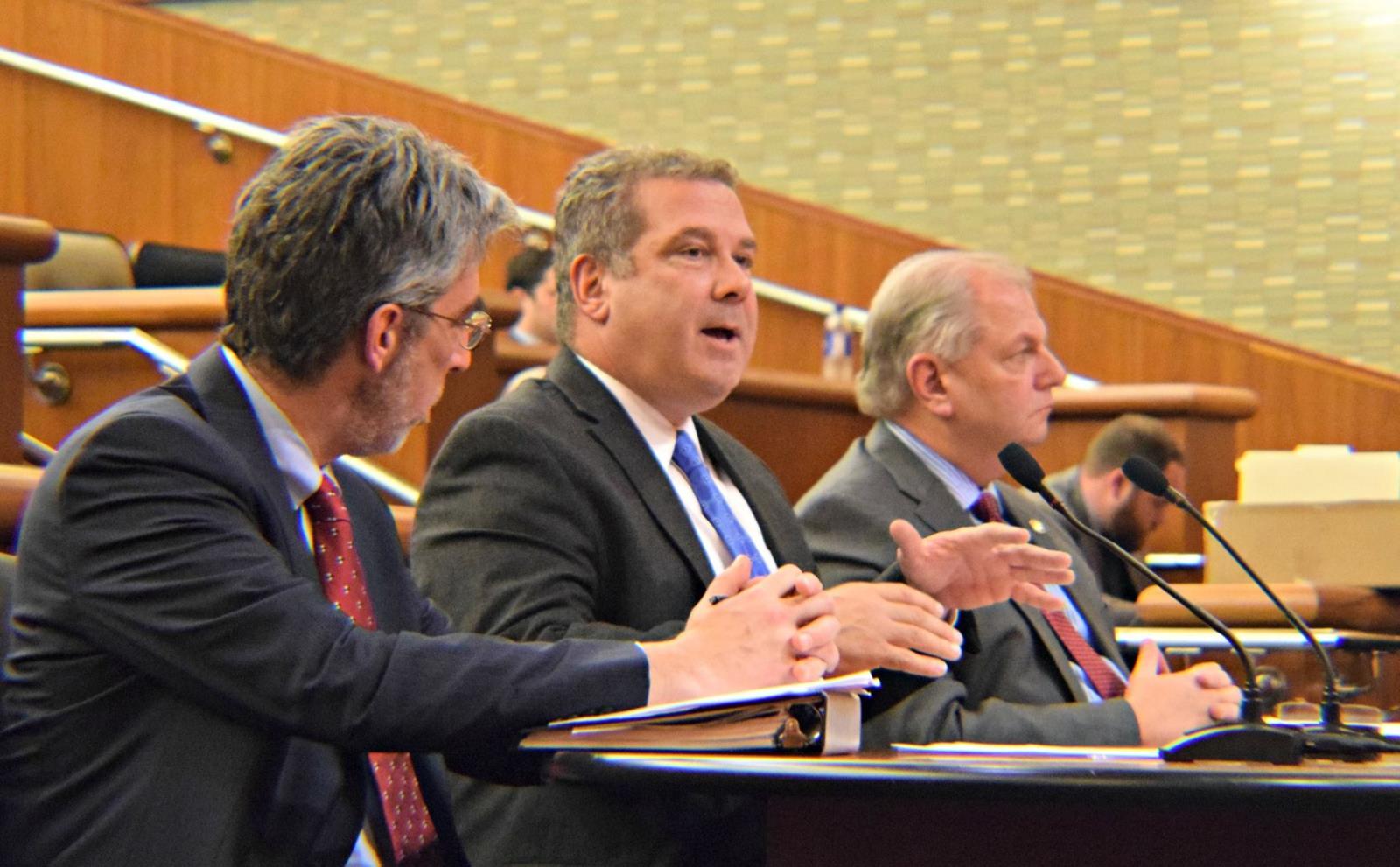 Over the last four years, and the last two in particular, we’ve demonstrated that we can meet our challenges head on – and come out better for it. Over the last two years, as you are well aware, Governor Andrew Cuomo and the Legislature came to the City’s support when it was discovered that the Yonkers Board of Education budgeted for $55 million in State spin-up aid that had not been re-allocated as it had in prior years.

In the aftermath of that shortfall and as part of the successful solution, the City consolidated nonacademic services with the Board of Education. We were the first city and school district outside of New York City to consolidate, and it’s been a great success. I believe Yonkers is a model for other municipalities across the State.

Additionally, because of your support – additional funding and the ability to raise revenues of our own – we were able to close last year’s gap. I want to thank Governor Cuomo, Majority Leader John Flanagan, Assembly Speaker Carl Heastie and our Yonkers Delegation for working so hard to keep our schools whole last year.

This year, in his Executive Budget, Governor Cuomo has proposed an increase for Yonkers Public

Schools; it’s a great start and we are thankful for it. This year, as I have in years past, I am asking the Legislature and the Governor to consider the extraordinary needs of Yonkers Public Schools and provide our district with the additional resources our children so deservingly need.

Here are some of our challenges:

The Yonkers school district is doing remarkably well considering the lack of resources. At 78% and improving, our high school graduation rate is the best of the Big 5, but it pales in comparison to the suburban districts that surround us – 97 percent in Scarsdale, 98 percent in Eastchester and 99 percent in Bronxville public schools.

How can we begin to level the playing field? It starts with providing Yonkers students with some of the basic instructional and pupil support services that our neighbors enjoy.

Over the last few years I’ve spoken of the partnership that has long existed between the State of New York and its cities. It is the recognition that cities alone cannot care for their dependent populations; that cities alone cannot repair their aging infrastructure; that everyone – upstate and downstate – has a stake in the success of our cities.

That partnership has faded in recent years. During the Great Recession and the years that followed, New York State, like every government, had to tighten its belt and take extraordinary measures to balance budgets, repair the economy and get people back to work again. Today, the Empire State is back and now is the time to revive the partnership.

It starts with AIM. Over the years, municipalities have taken a big hit when it comes to AIM funding. In Yonkers, AIM is down $27 million, 20%, since 2009 and under the Executive Budget Proposal, AIM is once again flat this year, even as the cost of everything for the City of Yonkers has gone up:

When I was a member of the State Assembly, and today as Mayor, I supported the Governor’s property tax cap. In Yonkers, we’ve stayed within the cap for four consecutive years and I intend to do so again this year. Under the property tax cap, which is actually 0.12% this year, Yonkers can only collect $409,000 in additional revenues.

During my first term as Mayor, we settled long-overdue contracts with five out of seven municipal labor unions – contracts that were six or seven years out – but it’s come at a cost. We received concessions from some, but not all. If we were to settle with the final two unions today, a cost of about $7.6 million, that alone puts us well over the cap.

In the face of flat AIM funding and rising costs, what are our options?

Cutting services is certainly not the answer. From schools to local services to federal funding, Yonkers has been hit hard by cuts over the years, and we’re only now just starting to come back. This school year, after several years without it, we were finally able to restore full-day pre-kindergarten. It makes a tremendous difference in our students’ lives. Should we turn back now? Of course not.

Over the last four years of my Administration, we’ve seen historic drops in crime. We even brought back foot patrols to Yonkers and now cops are walking the beat again. Is now the time to cut our public safety force? No.

Community Development Block Grants (CDBG), which fund important services from daycares to afterschool programs to food pantries, have been cut nearly 25% since 2004; HOME has taken an even bigger hit. That means people in our city – young and old – are missing out on services they so desperately need.

AIM was created to help offset the costs that are unique to cities – the cost of caring for dependent populations, homeless populations and so many others that have come to rely on the cities. Now is the time to increase AIM funding and to revive the partnership between the State and the cities.

Governor Cuomo said it best in his State of the State Address: “investment today in the infrastructure of tomorrow creates jobs and builds economic strength.”

Throughout our history, Yonkers has been defined by its location and infrastructure, especially our connection to transportation. Today, ships transport sugar to and from Yonkers’ waterfront Domino Sugar Refinery, Kawasaki Rail Car builds the region’s trains in Yonkers, ten Metro North Railroad stations serve our city and five major highways connect Yonkers with the New York City, the Hudson Valley and beyond.

Infrastructure defined our past and it’s the key to our future. But it is aging. Below ground, the city’s water supply and sewer systems are well over 100 years old. It impacts the health and quality of life of our residents and contributes to water quality issues in our waterways. The water supply is especially weak downtown, where our city is growing the most. It’s estimated that the necessary repairs to our sewer system would cost more than $40 million and our water supply system requires millions more in repairs and upgrades.

Above ground, bridges are a critical component of our transportation network, especially State bridges. They move people and goods across our city and to our growing downtown, but the majority of State bridges in Yonkers are in disrepair and need up to $10 million worth of work. Many of the key thoroughfares in our city – Yonkers Avenue, Riverdale Avenue and Ashburton Avenue, just to name a few – are State roads that need to be repaved.

Police stations, fire houses, public pools, libraries, parks, community centers – the very things that make up the fabric of our community – are all in need of repair. Rebuilding them would not only improve our quality of life, it would improve the economy and create good jobs.

Then there’s tech infrastructure. Yonkers has come a long way to position itself as the metro area’s next great neighborhood for young people – Gen Y – to live, work and play. And our efforts are paying off. IAC Applications, one of the leading app and search developers, relocated their headquarters to Yonkers’ waterfront. In order to attract even more tech companies to Yonkers, we’ve got to strengthen our fiber optic capability. That’s where New York State comes in. A fiber optic partnership with the State could attract an incredible amount of private investment in Yonkers and could transform our city into one of the Hudson Valley’s leading tech centers.

I’d like to close today on a proposal to Rebuild Yonkers Schools. The state has implemented successful rebuilding programs in Buffalo, Rochester and Syracuse. Those cities now have modern schools in which teachers can do their jobs. It’s time to provide the same for the children of Yonkers. Let me tell you why:

At Gorton High School, one of our several high schools, a tight, dimly lit basement hallway winds past the school’s gymnasium. The gym floods with heavy rains, forcing the school to cancel indoor Phys. Ed. and sports for a few days while the custodial staff cleans up.

Down the hall there are two basement classrooms; heating and cooling equipment, pipes and fans are suspended just a few feet above where students sit. This is the Gorton High School computer lab. Even in the winter, the heat is so overwhelming that teachers run oscillating fans round-the-clock just to try and circulate air. I visited these classrooms earlier this month. The thermometer read 82 degrees. You can imagine how hot it is during the warmer months.

At the DiChiaro School, one of the most highly sought after elementary schools in Yonkers, students take an art class in the basement. Every day, as they walk down and up the stairs, they pass an electrical room literally right next to their classroom. A large sign is posted on the door. Danger. High Voltage. Keep Away.

Years ago at School 16, enrollment was just over 350 students – the school’s capacity. Today there are 718 students at the school. To make room, School 16 shut down the library; books are now stored away in boxes in the gymnasium.

Ladies and gentlemen, there is an infrastructure crisis in Yonkers Public Schools.

Our schools buildings are some of the oldest in New York State. Their average age is 75; many are more than 100 years old. Years of deterioration have led to $2 billion in infrastructure needs.

Our schools are extremely overcrowded and that’s because we’re growing. Outside of New York City, Yonkers is one of the fastest growing big cities in the state – and that’s a good thing. People are moving to Yonkers to raise a family or start a business. But it has placed an incredible strain on our school system.

Our school district is currently 4,100 seats over capacity. 4,100 out of 27,000. That means 4,100 students are being taught in spaces that were never intended to serve as classrooms – basements, libraries and auditoriums. We’ve built annexes and mobile trailers, but they’re overcrowded too. We’ve patched roofs, installed new windows and have tried to insulate our buildings as best we can, but it’s never enough.

The time has come to completely rebuild Yonkers schools.

We need a partnership with the State that matches the size of the crisis. As it turns out, there’s already a model in place for such a partnership. That’s because the State has already partnered with upstate cities and rebuilt every school in Buffalo; reconstruction programs are also underway in Rochester and Syracuse too, even as those student populations decline while Yonkers continues to grow. My message today is that it was the right thing to do for those cities and it’s the right thing to do in Yonkers.

Working with our local delegation, I am pleading the Legislature to pass a school reconstruction program for Yonkers Public Schools, similar to what was passed for Buffalo, Rochester and Syracuse. Our students cannot wait. Our students deserve better. It is time to rebuild Yonkers schools.

Yonkers has come a long way in the last four years. When I took office, development in the city had stalled. Today, there is more than $1 billion in private investment in Yonkers and some of the biggest projects in the Hudson Valley are happening in our city. We’ve improved the fiscal management of our city and today Yonkers’ bond ratings are the highest they’ve been in a generation. Graduation rates are up, crime is down and people are starting to change the way they talk about Yonkers.

Yonkers is a better city today and I know that working together, with our great Governor Andrew Cuomo, legislative leaders and our Yonkers delegation, we will be even greater tomorrow.