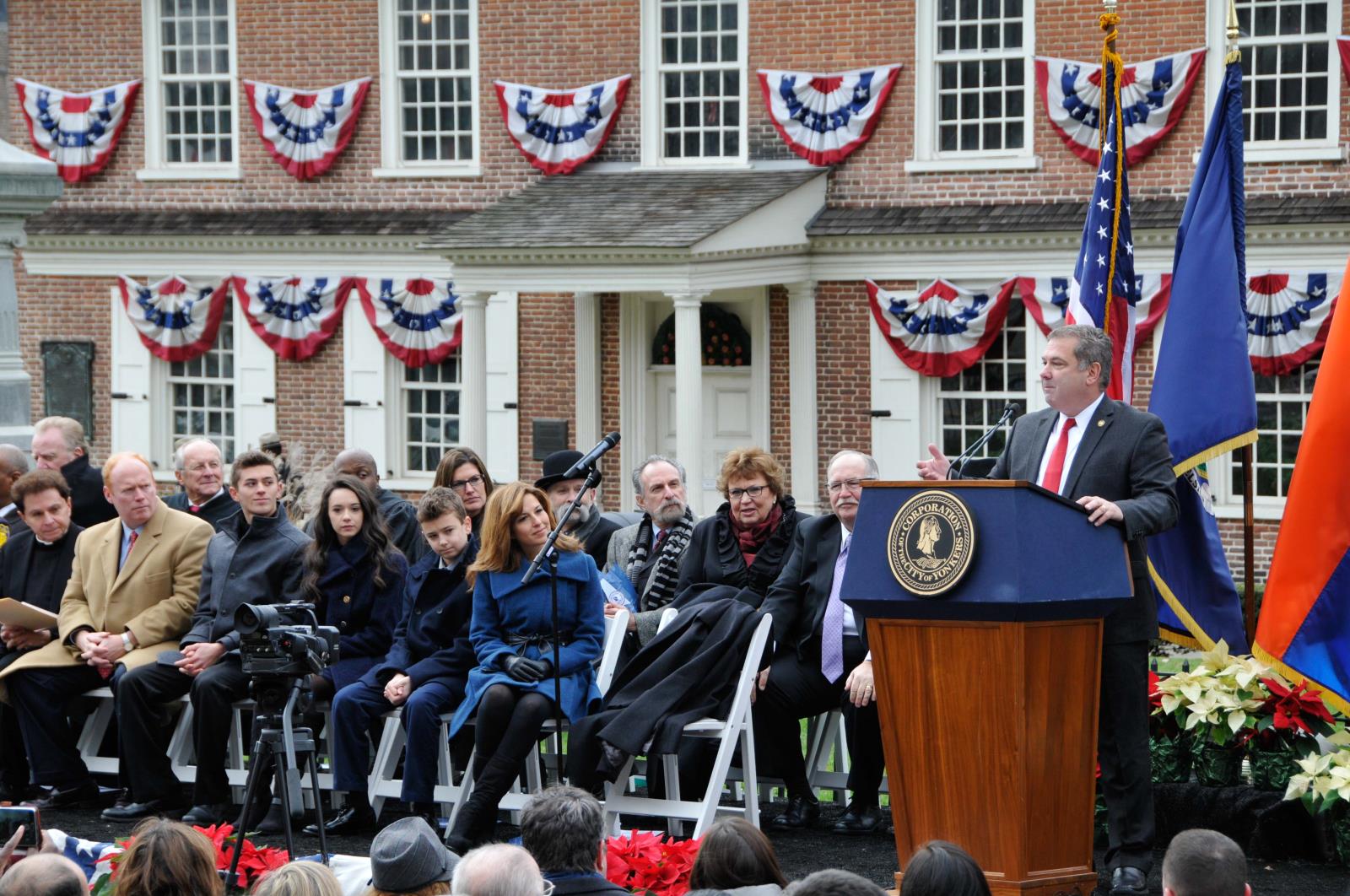 Good morning. Let me extend warm wishes to my family, especially my wife and children, and my parents who are here today.

To Congressman Eliot Engel, Council President Liam McLaughlin, Members of the City Council, members of the judiciary, State and County representatives, deputy mayors, commissioners, City staff, members of our City boards and commissions and most of all to the people of Yonkers and those watching live on News 12 at home, thank you.

I want to start by giving a round of applause to everyone who participated in today’s ceremony. My brother, Vinny, the Samuel Dow Post, Police Emerald Society, Yonkers Police Department, Hope, Harold, the Seda Family, Ra-lina, Father Grippo and Rabbi Vinas.

I especially want to recognize our public school students from Lincoln High School and the PEARLS Hawthorne School, who you’ll hear from shortly. I want to thank Father John and the clergy who participated in this morning’s Interfaith Service at St. John’s Church.

I also want to congratulate each of the public servants sworn into office today, and recognize a historic achievement for our city.

Today, with the appointment of Judge Thomas Quinones, we welcomed the first Hispanic City Court Judge in Yonkers history. It’s a proud day for the Hispanic community and a proud day for our City. Congratulations, Judge

View Photos from the Inauguration Ceremony 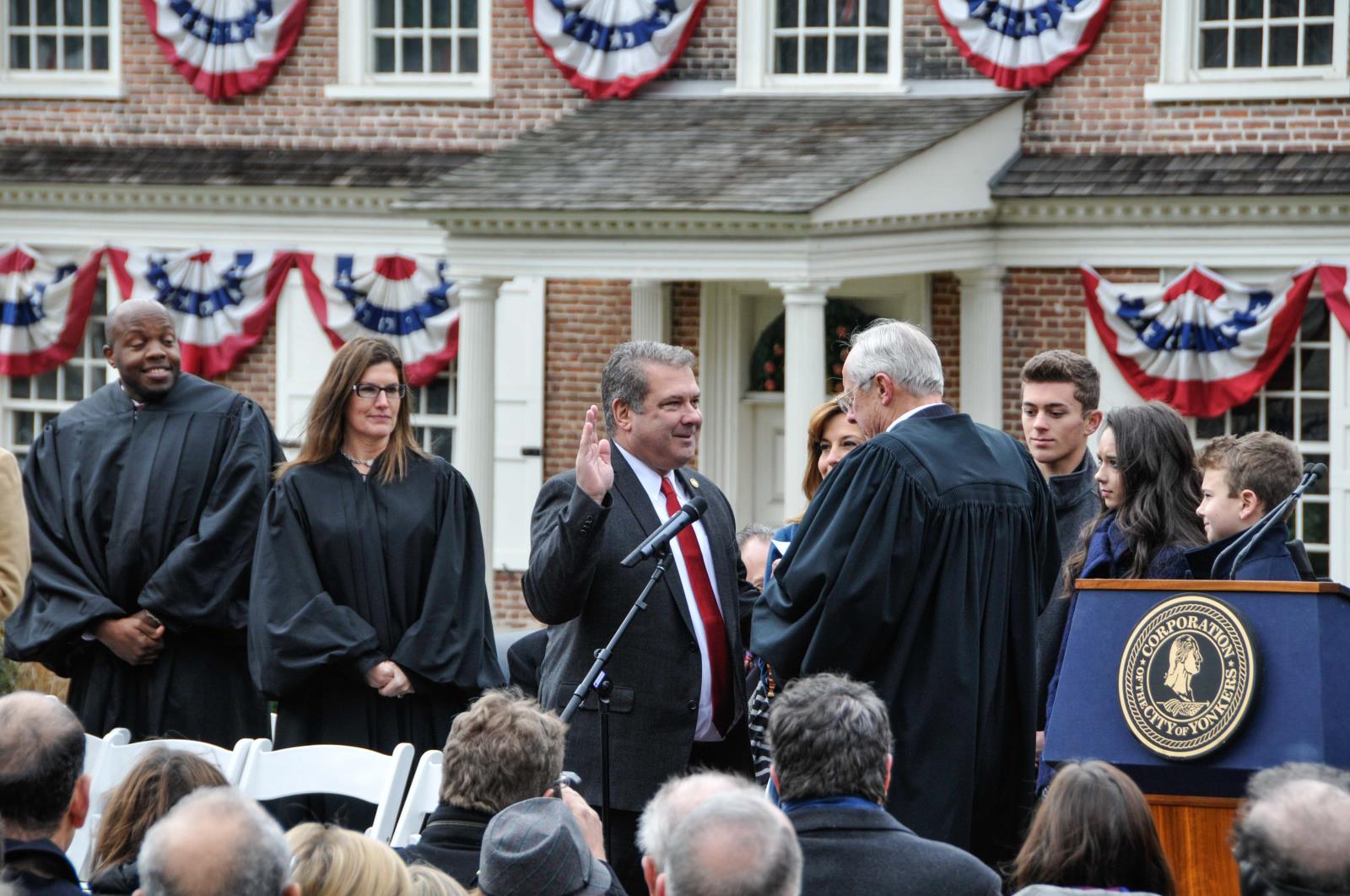 Today, as I look around I see so many people who were part of our team more than four years ago when we set out to re-energize our city and bring new and better solutions to the problems that confronted us. So many of you are still here, still working to make Yonkers better and still building a greater tomorrow for our city.

I also see many people who have joined the team since that inauguration day. You brought more energy, dedication and determination to our efforts. A strong team became stronger. Together we have accomplished more than we ever imagined.

You’ve heard me say it before. We took a city whose finances were on the brink, whose schools were headed for crisis, whose future did not seem assured, and we turned things around. Four years ago most people thought we were headed in the wrong direction and were fearful of the future. Now we are headed in the right direction, and we greet the future with hope and confidence.

Our finances are stable. Our schools are improving. Our city is safer. Jobs and investment are flowing into Yonkers as never before. Yet we are far from finished.

While we deserve to look back on what we’ve accomplished, our obligation to the people is to always look forward to what more we can achieve. We are better today; we will be greater tomorrow.

Let’s take all the energy we put into making Yonkers better during the past four years, and double it. Let’s take the partnerships we built and expand them. Let’s take the billion dollars in private investment and jobs that have come into Yonkers and seek a billion more. Let’s take the improvements that our schools are making and say that’s just the start. Our young people are outstanding. Let’s provide them with the future they deserve. And let’s take our safe city and the investments we’ve made in our quality of life and turn Yonkers into the very best place in which to live, work and raise a family.

My promise to the people of Yonkers is to begin this second term as we began the first.  To look at everything we do in City Government, and see if there is a way to do it better. To consider the diversity of this city as its greatest strength. To consider the opinions of everyone, regardless of political or partisan background, as important and worthy. I ask for agreement on only one thing. That whatever we do, it has to make our city a greater place for the people.

There is no better place to start our journey for the next four years than here at Philipse Manor Hall, because it is not just the center of where we’ve been, but it’s the center of where we are going. From here you can see it all. This building is the oldest standing structure in Westchester County.  It was built by Frederick Philipse in 1682. He and his wife raised eleven children here.  As my parents would say, there’s nothing wrong with having a small family.

Just after the Civil War it was Yonkers Village Hall, and later on became our first City Hall. But this building is as much about our future as it is about our past. Frederick Philipse built this house to be close to the river and to transportation.

Today people are still coming here to be close to the river and to the Yonkers train station, where you’re just a 25 minute ride to Grand Central Terminal. There are hundreds of new homes along the waterfront, and soon there will be many hundreds more.

In August of 1776, the first successful naval battle of the American Revolution was fought in the Hudson River just down the hill from where we stand. Today, ships still sail up and down the mighty Hudson. They transport sugar to and from the Domino Refinery and bring visitors to our pier.

It’s been said that George Washington would come to the manor to court Mary Philipse; she was Frederick’s sister. Just as we did this morning, General Washington would attend service at St. John’s Church then walk to the manor. So today, we walk in the footsteps of our first American President.

What better place to begin our journey for the next four years? Many will join us to make that journey a success.

Let me start with the members of the City Council and Council President. Congratulations to Minority Leader Michael Sabatino and Council members Chris Johnson and Mike Breen on their re-elections. Along with Council President Liam McLaughlin, Majority Leader John Larkin and Council members Corazon Pineda-Isaac and Dennis Shepherd, they have changed the way things are done in Yonkers. No council has ever been more bipartisan or more determined to put the people first, and for that we should all be most thankful.

Let me thank Governor Cuomo and the State Delegation, who are tireless in their work representing us in Albany. We know how important it is to get Albany to recognize the needs of Yonkers. When I go to the Capital to make our case, it is so good to know that our State Delegation has already paved the way.

Leader Andrea Stewart-Cousins, Senator George Latimer, Assemblywoman Shelley Mayer and Assemblyman Gary Pretlow make up the very best delegation in all of New York and for that we are thankful.

I also want to thank Superintendent Dr. Edwin Quezada, Board President Dr. Nader Sayegh, the Board of Education, and all who have begun to move our schools forward.  Nothing is more important than continuing the progress that we have made in providing a top quality education for every student in Yonkers.

Let me thank every dedicated member of city government, our talented workforce and union leaders. Business owners, veterans, those who belong to civic organizations, churches.The PTAs and everyone who together is making Yonkers a greater place.

Thank you to our first responders who protect us at home and the Armed Forces who serve us abroad.

Over the next four years, just as we have during the last four, we’ll accomplish great things. We’ll also face challenges, but we’ll overcome them as we always do. That’s because the people of this City are the hardest working, the most determined and the most dedicated you’ll find anywhere.

You’re the resident who was born and raised in this City, and you’re raising your own family here because you believe in Yonkers. You’re the business owner who put your life savings on the line to stake out your piece of the American Dream.

You’re the students in our schools. You’re determined to succeed, go to college and one day return home to Yonkers.

You’re the immigrant who came to our City in search of a better life for you and your family. You never asked for a handout, just a shot to make it all work.

People like my grandfather, Nicholas Spano, who came to Yonkers exactly one hundred years ago with his father, Leonardo. My grandpa came to America with nothing but the clothes on his back and some change in his pocket.

Like so many newcomers to Yonkers today, the odds were stacked again him, but he made it work.
He built a successful business from nothing, delivering coal and ice to people in Southwest Yonkers. And he raised a great Yonkers family. My dad, a U.S. Marine, who served our city as a County Legislator and County Clerk. Together with my mom, they raised sixteen children right here in Yonkers.

Like you, each and every one of us is proud to call this city our home. A city that’s better today. A city that will be greater tomorrow.

Thank you all for coming.

Happy New Year and God bless you all.