YONKERS, NY – November 2, 2017 – Yonkers Mayor Mike Spano today announced that the City of Yonkers, on behalf of the Hudson River Waterfront Alliance (HRWA), is requesting the U.S. Guard (USCG) reconsider its exclusion of the local municipal stakeholders at the upcoming Hudson River Ports and Waterways Safety Assessment (PAWSA) workshops on November 7-8th and 15th. The PAWSA process is an opportunity for stakeholders, such as Yonkers and the HRWA, to identify safety hazards, evaluate potential mitigation measures and their impacts concerning the proposal to add 43 new barge anchorages along the Hudson River.  Earlier this year, Yonkers and HWRA submitted a request to participate in the workshop but were excluded from the list of invited participants.

“I am very concerned over the lack of inclusion of municipal leaders representing hundreds of thousands of residents of Hudson River waterfront communities, as well as the lack of transparency by the U.S. Coast Guard in their selection of the workshops’ participants,” said Mayor Spano. “It is especially concerning considering that these PAWSA workshops could result in a recommendation for establishing additional barge anchorages on the Hudson River based on the decisions of those selected to participate.”

YONKERS, NY – June 29, 2017 – Yonkers Mayor Mike Spano today declares victory as the U.S. Coast Guard announced its suspension of its Hudson River anchorage proposal. The suspension of the plan comes after a yearlong “Ban the Barges” initiative launched by Mayor Spano which included the convening of over 30 Hudson Valley communities that would be affected by the proposal and the launch of an effective social media advocacy campaign that led to more than 10,000 public comments opposing the proposal.

“Together, we can declare victory and reclaim our river,” said Mayor Spano. “The shores of the Hudson River will remain a place where our residents and visitors can gather to live, work and play rather than become a parking lot for oil tankers.  I want to give special thanks and recognition to the countless local municipal leaders and advocates, especially our federal representatives and community partners Riverkeeper and Scenic Hudson, who helped fight to keep the Hudson River our national treasure for generations to come.”

Last summer, Mayor Spano convened elected leaders from the Westchester County communities to create the Hudson River Waterfront Allianceto collectively stand in opposition to the United States Coast Guard’s proposal of 10 new anchorage locations along the Hudson River. The Alliance, consisting of officials from each town, city or village from Yonkers and points  north in the Hudson Valley, launched the “Ban the Barges” social media advocacy campaign on Facebook (facebook.com/banthebarges) and Twitter (@banthebarges) including a change.org petition (www.yonkersny.gov/bargepetition) directed to the U.S. Coast Guard, urging the regulatory agency of the Hudson River to prohibit the  anchorage plan.

Mayor Spano and the other Westchester waterfront community leaders also obtained legal opinion by outside maritime counsel to assess the Alliance’s legal and appeal options in the event of a rule-making, to consider possible Environmental Justice implications and to seek additional strategies for opposition.

Proposed Hudson River Anchorage Sites May Be Dead In the Water

Yonkers Mayor Spano is leading the charge amongst Hudson River Waterfront Communities to Ban the Barges, an advocacy campaign opposing a proposal by the Maritime Association of the Port of New York and New Jersey and the American Waterways Operators to establish 10 or more new barge anchorage sites on the Hudson River from Yonkers stretching up 70 miles to Kingston.

The Yonkers Extension Anchorage Ground would cover approximately 715 acres for up to 16 vessels and provide a vessel swing radius of approximately 1,200 feet for each vessel. This proposal will effectively result in continuous, end-to-end barge traffic or “parking” from the Westchester border straight into Dobby Ferry, with additional parking directly in front of the Indian Point nuclear power facility.

The shores of the Hudson River should be a place where our residents and visitors can gather to live, work and play.  The Hudson River Waterfront Communities oppose this proposal and is asking residents, business leaders, community organizers and others to act on our behalf in preserving our beautiful waterfront.

Please sign our petition to join our fight to Ban the Barges and Protect Our Hudson. 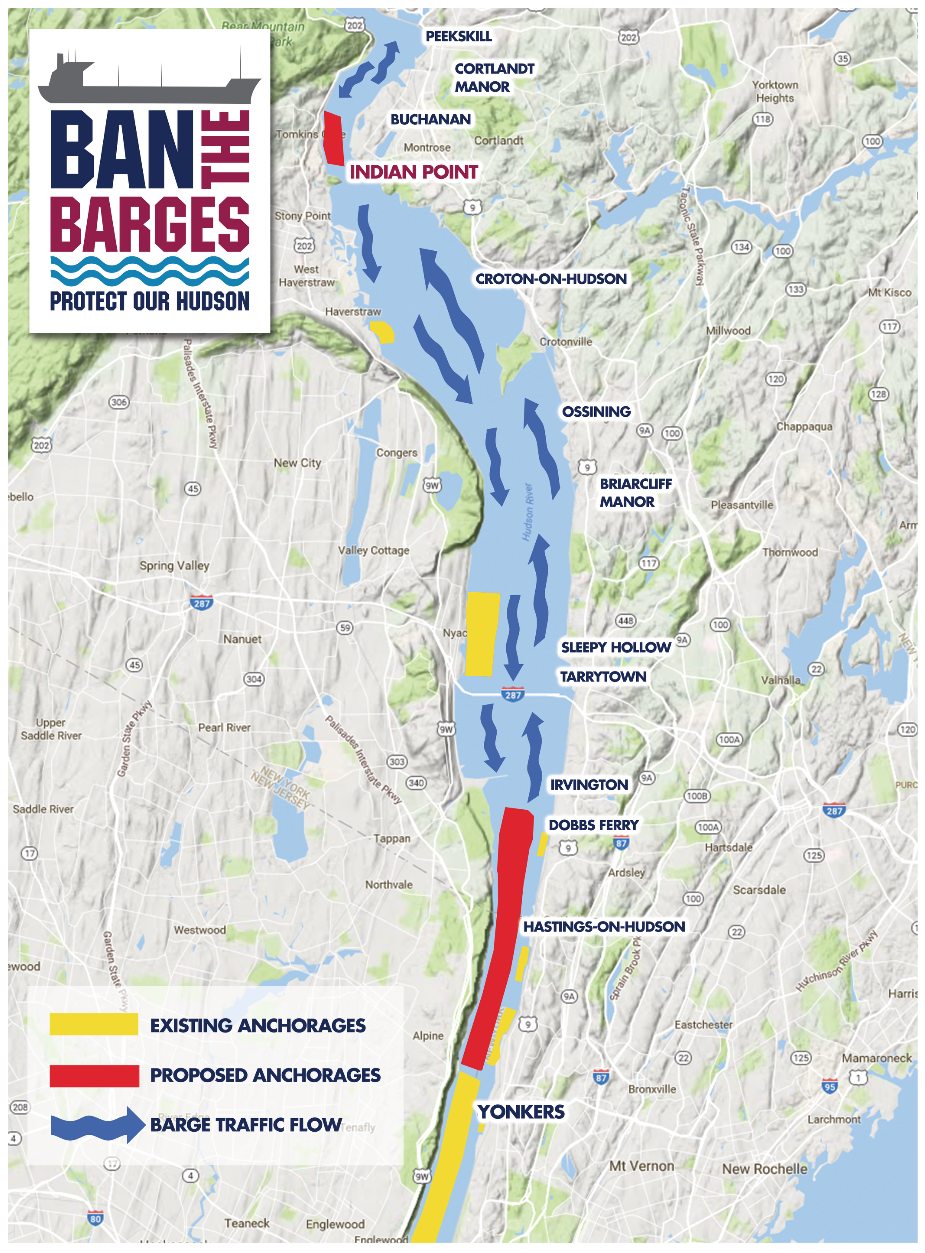 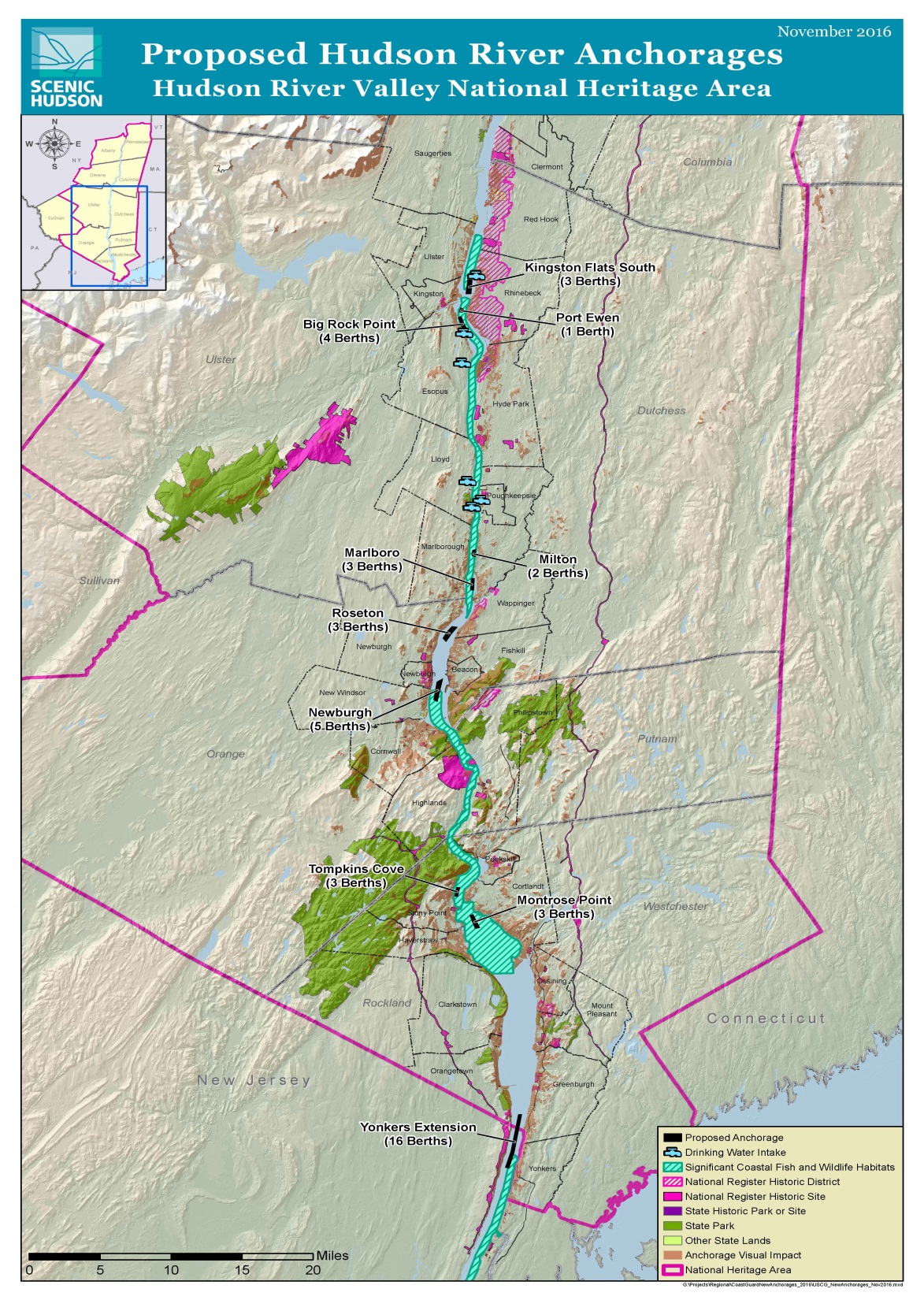 The Coast Guard is seeking comments and information about the operational need for new anchorage grounds and what form possible regulations should take. We urge our residents and community groups to visit the Federal Register and provide public comments through December 6:

Contact your Federal Delegation and support their efforts to Ban the Barges:

Hudson River Waterfront Alliance, the group of elected leaders from Westchester County riverfront villages, towns and cities, are galvanizing their efforts collectively and locally to prevent additional anchorages from lining the shores of the Hudson River: 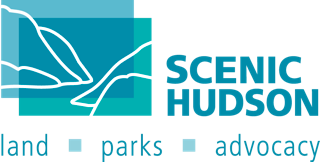 Scenic Hudson works to protect and restore the Hudson River and its majestic landscape as an irreplaceable national treasure and a vital resource for residents and visitors.
CLICK HERE FOR MORE ON SCENIC HUDSON

Their mission is to protect the environmental, recreational and commercial integrity of the Hudson River and its tributaries, and safeguard the drinking water of nine million New York City and Hudson Valley residents.
CLICK HERE FOR MORE ON RIVERKEEPER

The Hudson Valley Gateway Chamber of Commerce is an organization of business and civic members joined to promote and open opportunities for its members by exchanging ideas, educating and advocating on behalf of businesses in order to foster the growth and well-being of its members, and to enhance the quality of life in the communities we serve.
CLICK HERE FOR MORE ON THE HVGCC

Historic Hudson River Towns, Inc. is a consortium of municipalities located along New York’s Hudson River, from Yonkers to Albany, organized under an Inter-municipal Agreement (IMA) with 501(c)3 not-for-profit, tax-exempt status.
CLICK HERE FOR MORE ON THE HHRT 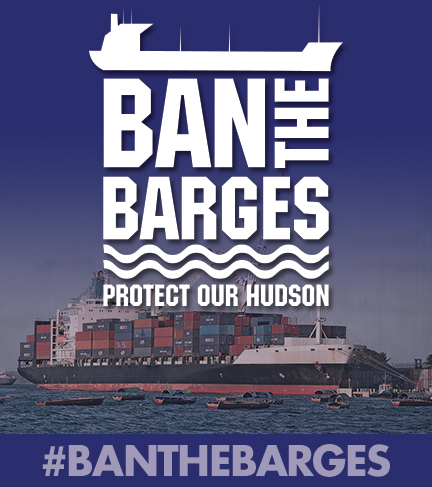 Just how much cargo is shipped on the Hudson?

Barges versus vistas on the Hudson

Trust in Coast Guard to protect the Hudson: Editorial

No Parking on the Hudson

No Parking on the Hudson

Mariners 'stuck in the middle' in Hudson River anchorage dispute

Barge with 2.5M gallons of gasoline runs aground in Catskill