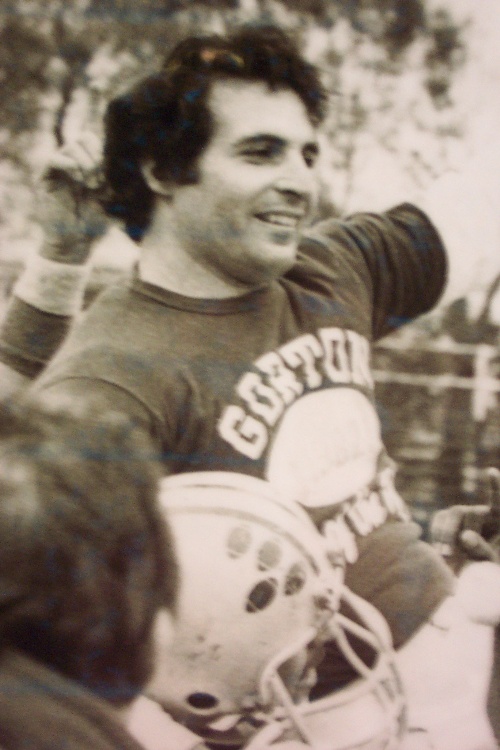 Love, respect, harmony, honor, commitment, discipline and sacrifice. These were Donald DeMatteo’s most important ingredients for a family to live together in harmony: Not just his own family but his Gorton family of thirty years.

Donald DeMatteo was born and raised in Yonkers. He attended P.S. 23 and Archbishop Stepinac High School in White Plains, graduating from Chadron State University in Nebraska. Don credited his parents, Cealia and Dominick, for many of his accomplishments. His father died in 1968. His wife, Donna, and his two sons, Donald and Dan, are all teachers in the Yonkers Public School system.

Don began his career as a teacher, mentor and coach in Yonkers. He joined the Yonkers Public School system in 1971 as a Physical Education teacher at P.S. 6, and as an assistant football coach at Gorton High School. In 1972, Don joined the Gorton family full time and became Head football coach in 1976. He remained in that position until his death in 1999.

Coach “D” devoted three decades to the students of Yonkers as a dedicated teacher and as an outstanding coach. In both roles he provided guidance and inspiration to all of his students. He tried to prepare these young people to live a positive and productive life in a world that is as competitive off the field as it is on. As a coach he instilled the important family ingredients into his football family. With these ideals in mind the Gorton football program always achieved success and the ever-present respectability, which was evident in Gorton’s teams. His teams recorded 120 wins, 80 losses and 6 ties. Coach “D’s” teams played the way he coached and lived his life: smart, poised and confident.

Don DeMatteo loved his students and demonstrated that affection by teaching the skills and discipline of football. More importantly however, Don enlightened his players with life lessons about courage and survival. He taught them how to convert “blocks” in life into touchdowns, and how life’s hurdles served to strengthen all. Coach D’s” office became a safe haven where his family of students would gather for comfort, guidance, encouragement or even a meal. He united families that laughed together and cried together. He allowed his students to see that a display of emotion brought truth to a man’s soul.

During his lengthy career in Yonkers, Donald D. DeMatteo was deservedly the recipient of many awards, honors, and gifts commemorating his brilliant career as an all-star football coach. These included induction into the Stepanac Hall of Fame in 2000, the naming of the Tony and Don DeMatteo Parkway in 2000, an Honoree of the Frank McGuire Foundation in 1999, as well as five Sectional Titles, City Championships, and Coach of the Year awards. His greatest contribution to all that knew him was not his outstanding winning record, but the love, dedication and compassion he had for others.

Don’s legacy is the great number of young men and women whose lives he touched over the course of his life. His legacy will live on as an inspiration in the hearts of young people, challenging them to make a difference. Coach “D” made a difference.