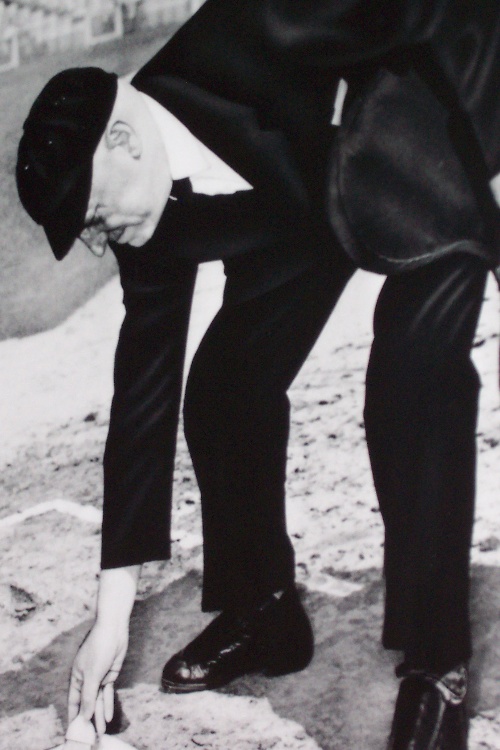 From the sandlots of Yonkers to eighteen years in the Major Leagues to three World Series, Yonkers native Billy Grieve called a lot of men out, and just as many safe. He incurred the wrath of baseball greats like Casey Stengel, Ralph Houk, Yogi Berra, Joe Lapchick and Cliff Mapes: He enjoyed their friendship and admiration as well.

Born in 1896, Billy was raised in the Nodine Hill section, and went to work at the Smith Carpet factory right after grammar school. He then worked at the sugar house, and later became assistant director of the Yonkers Recreation Department. From there Billy went into the armed forces during World War I. He came home a Sergeant.

Once home from the War, Billy Grieve began his umpiring career at Glen Park (now War Memorial Field) in 1922. He also played basketball for four different teams, and coached the Cook Post American Legion baseball team to the 1926 Junior World Championship. After his first game as an umpire, he knew that being an umpire was what he was meant to do.

He signed as an umpire with the Eastern League, a Class A baseball organization in 1936, the same year that he served as a member of the New York State Assembly. By 1938 his contract was purchased by the American League. His fair yet hard nose style earned him the respect of all. He made the controversial call that gave the Red Sox a victory over and the lead in, the League’s 1949 pennant race with the Yankees. Many a great player argued with some of his calls: Billy Grieve never second-guessed his calls, he knew in his heart he made the right calls. This skill, character and integrity gave him the coveted opportunity to umpire for the 1941, 1948 and 1953 World Series. He continued to umpire for the American League until his retirement in 1956. In 1968 he was elected to the Westchester County Sports Hall of Fame.

Billy Grieve, considered the “grand old man of baseball in Yonkers and Westchester”, was recognized for his umpiring excellence and fairness by players, team owners and most importantly by the fans. Billy Grieve, a true Yonkers sportsman, has now come full circle as a member of the Yonkers Sports Hall of Fame in front of the sandlot, which gave him his start.