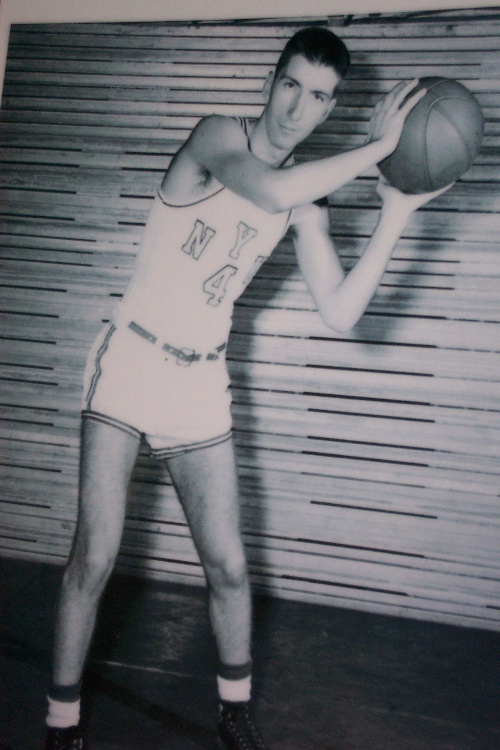 He was a Wolf, a Hodio, a Mule and a Violet, but most importantly he has been characterized as the “finest gentleman I’ve ever coached” by his NYU basketball coach, Howard Cann. Daniel E. Quilty, born in 1926, lived his whole life in Yonkers. From P.S. 16 it was on to Gorton where he played basketball and baseball for all of his four years, and ran for the Cross Country Team for two years. Basketball was his sport: he was Captain of the Gorton Wolves and led his team to the City Championship in 1944, averaging 17 points a game for a season’s total of 238 points. For that effective effort he earned a spot on the All-City Basketball Team. Never one to stay still he played basketball for the St Paul Lutheran Team, the Knights of Columbus Team, the St. John’s Mules, the North End Basketball Team, the Don Bosco House Team in Port Chester and the Nepperhan Russian American Area Church Team. He graced these teams with his athletic abilities simultaneously between 1939 and 1944.

After a two-year stint in the Navy, Dan entered New York University on a basketball scholarship in 1947. He stayed there for fifty-two years, first as a physical education instructor and the freshman basketball coach, then business manager for the athletic department. After earning a Master’s degree in Education, Dan became varsity assistant coach and then chairman of the Physical Education Department and Assistant Athletic Director. In 1972 Dan became Athletic Director and served as the first chairman of the University Athletic Association Administrator’s committee. As the NYU delegate to the Metropolitan Intercollegiate Basketball Association (MIBA), governing body of the NIT, Dan served as President and Treasurer.

When Dan retired as NYU’s Athletic Director in 1995, the conference room in Coles Sports Center was named in his honor. As tribute to his passion for athletics, and basketball in particular, the NIT currently sponsors the Daniel E. Quilty Scholar-Athlete Award. This award is given to the top male and female scholar-athletes from the NIT institutions.