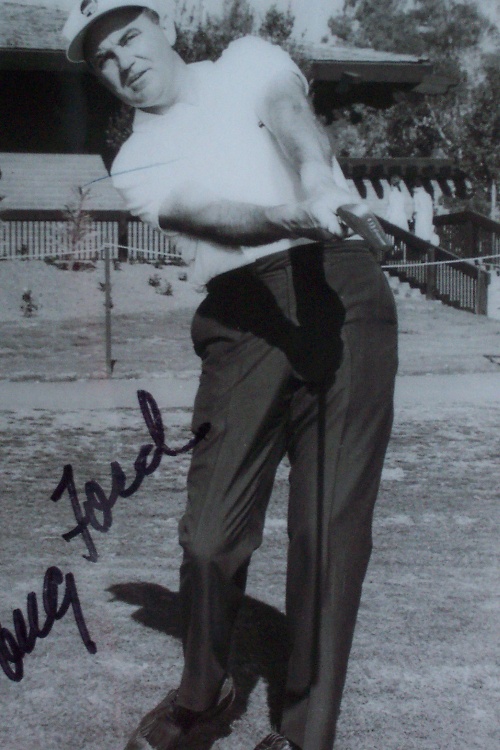 As a youth Doug Ford was torn between a career as a baseball player and a golfer. Born in West Haven, Connecticut on August 6, 1922, he moved to Yonkers in 1950. His choice of career appears to be pre-ordained. Ford followed in his father’s footsteps, a club professional at Putnam Country Club in Yonkers and in his three uncle’s, who were also golf professionals.

Ford’s legendary quick pace on the golf course are giant steps, as his driving accuracy and lightening speed on the greens led him in 1948 to professional play. Those same qualities led him to rack up 23 tour victories in his PGA Tour career, including the 1955 PGA Championship and the 1957 Masters. The City of Yonkers saluted his PGA Championship title with an all-out parade through downtown to welcome the conquering hometown hero.

His list of accomplishments in the sport of golf is a set of ringing endorsements for 60 years of play. Unbelievably, Ford has made 45 appearances in the Masters, surpassing all other records for playing the grueling 72 holes in Augusta, Georgia. Doug is PGA of America Player of the Year for 1955, and is qualified for induction into the PGA Tour Hall of Fame, which will be incorporated into the World Golf Hall of Fame when it opens in 1998.

For his efforts, Doug has earned more than a third of a million dollars in his long career. In fact, he was second on the money list twice and was never out of the top twenty on the money list during his firs 12 years on tour.

Mr. Ford joined the Senior PGA Tour in 1972, winning the 1981 Commemorative Pro-Am, Doug Sanders Energy Classic. He has played on four Ryder Cup teams and was inducted into the PGA Hall of Fame in 1978.

Doug Ford served his country during World War II in the Coast Guard Air Division, 1942 through 1945 in the Caribbean. He owns the Lacuna Golf Course in Lake Worth, Florida, the state where he now resides.