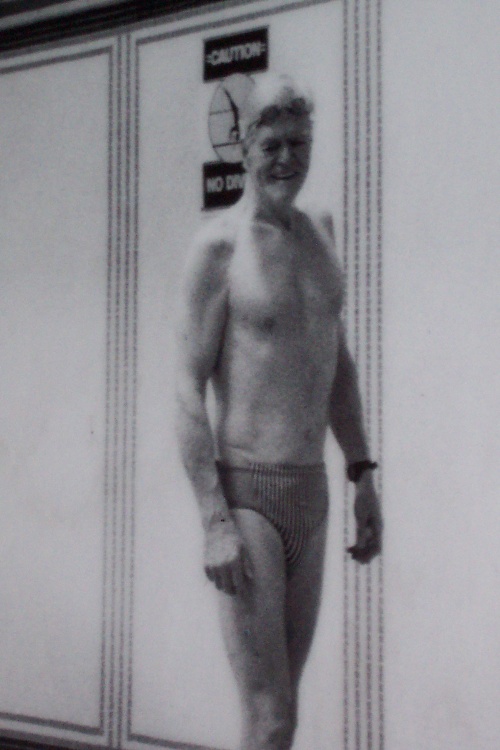 Richard J. Kennedy was born in Manhattan in 1921. He lived in the Bronx until his family moved to Yonkers in 1931. While in High School, Richard became interested in swimming, specifically lifesaving and lifeguarding. It was soon after that his competitive swim career had begun. While captaining his High School team, he won the New York City Public School Athletic League Championship in the 50 yard freestyle for Theodore Roosevelt High School.

In 1939 and 1940, Richard swam in the Aquacade at the New York Worlds Fair. His swimming earned him a scholarship to Syracuse University but he decided to enter the United States Army Air Corps. While in service, he swam for the Nellis Air Base swim team in Las Vegas, Nevada, and won every 50-Yard and 100 Yard freestyle event entered. Upon his discharge from the service in 1945, Richard joined the New York City Police Department in 1947. While in the Police Department, he swam for the Police Sports Association and won two A.A.U. Championships in the 50 yard and 100 yard freestyle for two consecutive years.

After spending some time away from competition, Richard returned to competitive swimming in 1983 at the Masters level and began to set records in the 50 yard and 100 yard freestyle and 50 yard breast stroke for every age group in which he swam. He won 65 Gold medals and eight Silver medals while setting ten Empire State Games records. He was named one of the top ten swimmers nationally three times and named to the All American Masters Team three times. He has been five times New York State Masters Champion in the 50 yard freestyle and breast stroke and anchored a national record setting 200 yard medley relay.

Richard is currently the staff photographer for the City of Yonkers and also teaches Adult Learn to Swim and Lifeguard Training classes for the Department of Parks, Recreation and Conservation. Richard continues to reside in Yonkers, New York.