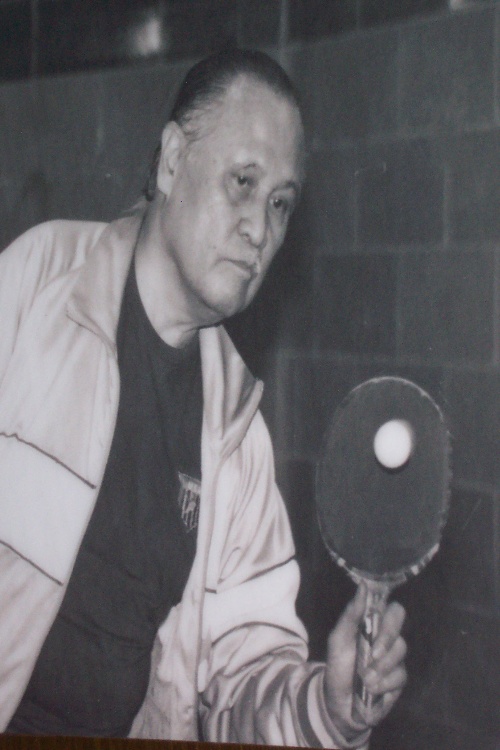 Marcelino Monasterial was born in Manila, Philippines in 1923. His table tennis career started at the age of six when he was just tall enough to see across the table. In 1934, at the age of 11, Marcy competed for his first table tennis title on a national level. In 1944 he earned the national junior championship which at the time was an uncontested title which he retained for a long time.

While serving as a First Lieutenant during World War II, Marcy was fired upon by Japanese troops and a round struck his right arm. Doctors were forced to amputate his arm below the elbow. Three weeks after losing his dominant right arm, Marcy was playing table tennis with his left arm as if he were born with left handed dominance. As a right-handed player, Marcy had an overpowering forehand drive, but this was now a thing of the past. He developed a short blocking game and an excellent backhand flip, which helped to produce a stone wall defense.

Marcy came to the United States in 1945 and soon after received a B.A. and an M.A. from Columbia University. In 1956, he led the New York State team to the U.S. Team Championships. In 1957, he was selected as a member of the U.S. team, which participated in the World Championships in Stockholm, Sweden. In 1984, he won a Silver medal and 2 Bronze medals at the 7th Paralympic Games held in New York and England. In 1988 he competed in the 8th Paralympic Games in Seoul, Korea and in 1990 was a quarter-finalist at the World Games for the Disabled in Assen, Holland. In 1992, Marcy won a Bronze medal at the 9th Paralympic Games in Barcelona, Spain.

Marcy, has over the years, donated his time back to the sport he loves by playing table tennis with disabled citizens at the Burke Rehabilitation Center in White Plains, New York and he continues to work with the American Wheelchair Table Tennis Association since its inception.