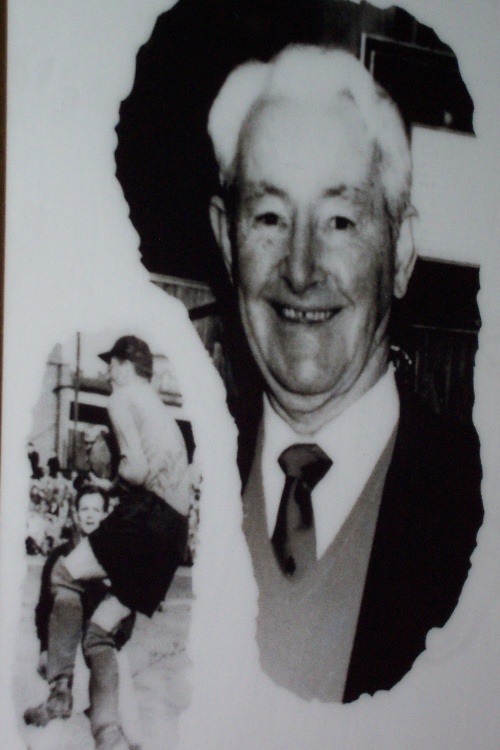 Michael J. McGrail was born in Leitrim, Ireland in 1922. In 1935 his family moved to the United States and settled in the Bronx. Michael attended Dewitt Clinton High School where he excelled in the sport of soccer. He showed so much promise in soccer that he was awarded a scholarship to Princeton University. With the outbreak of World War II, Michael put his college dreams aside and went to work at the Providence, Rhode Island shipyard. He then served three years in Europe with Combat Engineers.

In 1946, Michael returned to New York and the game of soccer as a fullback for the Bronx Scots of the National Soccer league. Later he played center half and goalkeeper for the German-Americans, Brooklyn Sport Club and Greek Americans of the German American League. Following that he starred in goal for the New York Americans of the American Professional Soccer League, when they won the American League Championship and the National Open Challenge Cup in 1953-1954 season. Kutis of St. Louis defeated Los Angeles Astec for the Western final in the Open Challenge cup and New York Americans played kutis to a 1-1 tie in St.Louis and shut them out 2-0 in Triborough Stadium for the National Championship. A Knee injury while playing with the Yonkers Scottish-Americans in 1955 at Tibbetts Brook Park ended his soccer playing days where he had won championships with five different clubs in ten years.

Although his playing days were over, Michael’s love of sports led him to Henry S. Richards Boys and Girls Club. Michael is now in his 35th year as an active volunteer. In addition to being an officer on the Board of Directors he has coached and managed teams of boys and girls in baseball, softball, touch and tackle football, basketball, volleyball, track and soccer. Known as the Founding Father of Little League Soccer in Yonkers he single handedly converted four baseball teams into soccer Teams with trash baskets as goals on Andrus Field in 1973. Within three years there were 12 boys teams and four girls teams competing in the Richards Leagues and other clubs took in the sport. In 1984 he co-founded Yonkers Youth Soccer League and was Vice President and main fundraiser. Michael J. McGrail was elected into Henry S. Richards Club Hall of Fame in 1977 and in 1988 was made a Life Member. In 1984 the club started the Michael J. McGrail Founder’s Cup Soccer Tournament in his honor and Westchester teams competed each October for Senior and Junior cups and trophies.

Michael’s playing ability and promotion of soccer in the United States over the past 46 years, his love of all sports and all children has steered thousands of Yonkers youth in a healthy and happy direction and his continued devotion to soccer has brought honor and prestige to our City. Furthering his promotion of soccer, he led a contingent of Yonkers youth soccer players, coaches and parents up Broadway and Park Hill Avenue in the 1991 Columbus Day Parade carrying a soccer ball on his head.