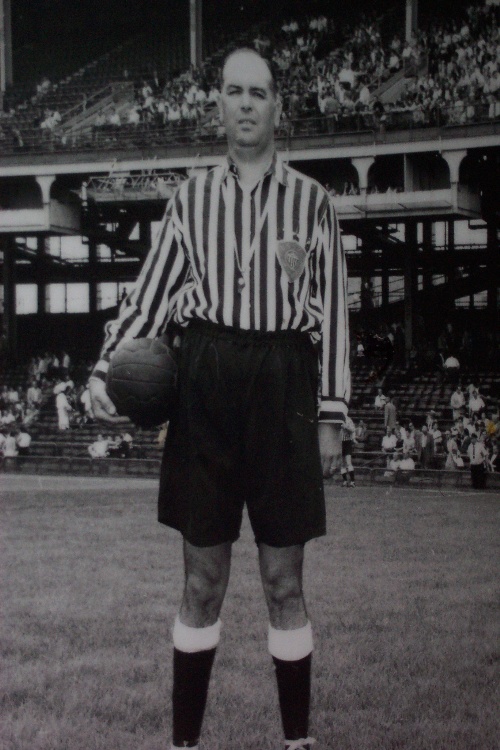 Vincent always believed that one should not always “take” from the game but rather contribute as well. Often there was Junior games of importance, which would require an official of Vinnie’s caliber. Vinnie would not shun a game, which another official might find trivial or financially unrewarding. Often he would travel to soccer venues hundreds of miles away from his home at his own expense for a fee of $15.00!

Vincent was always keenly aware of the need for recruiting and developing referees. Throughout his career he served the New York Soccer Referee Association for that purpose, a board member for over twenty years. Indeed, he would often put aside his own personal gain for the benefit of all referees. Furthermore, he involved referees in charitable causes, which benefited the image of the game. As an example, when Southern Italy was devastated by an earthquake, he persuaded the members of the Association to participate in relief efforts for the homeless victims by contributing their game fees to this worthy cause. This effort that prompted the Minister of Foreign Affairs for the Italian Government to award Vincent with Knighthood as “Cavalier” in 1978.

Vincent’s contributions to the game he loves so dearly did not end with the termination of his active officiating career. As a National Emeritus Referee he believes that he should still assist in the further development of referees. Through his vast experience and knowledge of the game he promulgates the local assessment program and became the Chief Assessor for Southern New York, the State Director of Assessment for Eastern New York in 1986, USSF National Referee Assessor in 1987, and serves on the Soccer Committee for the 1994 World Cups Games. Through his guidance many referees have attained both National and FIFA status. Moreover, his abilities in this role were quickly recognized by the NASL, MISL, ASL and USL where he served with distinction. Referees from all over the nation continually ask him for his personal assessment, so they may draw upon his expertise. His dedication has been unselfish and unrelenting, never seeking praise or reward. Vincent has always been content knowing his efforts served the sport of soccer well.