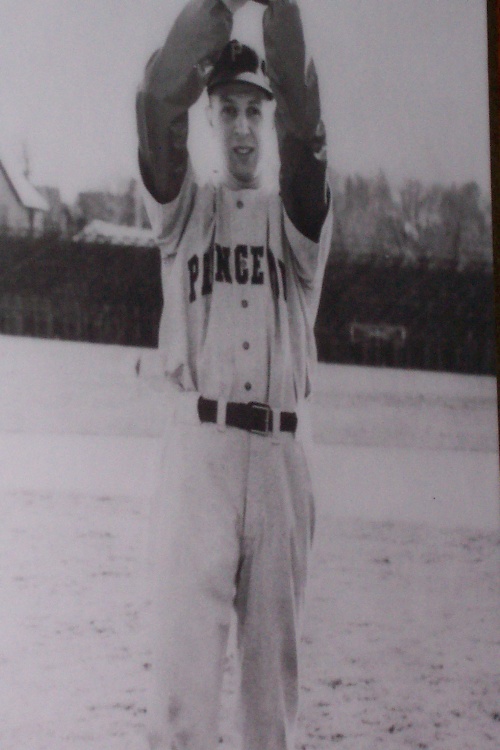 Ray Chirurgi was born in Yonkers, N.Y. on January 25, 1930, and the youngest son of Sam and Frances Chirurgi. Raised in the “Old Seventh Ward”, he started playing baseball at a very young age. At first it was mostly pick-up games. As he got older he pitched for Mount Carmel Church in the CYO league, leading his team to many city and country championships. At the age of fifteen he tried out for the New York Giants.

Ray started pitching for Yonkers High School as a freshman in 1945. One of the few high school athletes to play four years of varsity baseball, he was elected to the All City and All County Baseball Teams for three consecutive years. In 1948 he became captain of both the baseball and basketball teams. In the same year, Ray made one of ten finalists in the “Most Valuable School Boy Players Contest” in the Metropolitan Area. Once while playing American Legion Baseball against White Plains, he pitched a perfect game – not one batter reached first base!

The last time Ray pitched as a Yonkers schoolboy, it was a win against the Brooklyn Dodgers all Stars, a 5-2 victory under the lights at Fleming Field.

At Graduation from Yonkers High School in 1948, Ray was awarded a four-year scholarship to Princeton University, believed to be the largest scholarship awarded any student at Yonkers High School at the time. There he was the ace of the Freshman Baseball Team. As a sophomore on the Varsity Team, he won 9 games and every summer he would play amateur ball in Nova Scotia. At the beginning of 1951 season, Ray was awarded the Cafer Cup, given to the most outstanding player on the Princeton University Baseball team. Later that year, he was selected “Most Valuable Player” on the All East Team. He was elected captain of the Princeton University Baseball Team, a first for any pitcher in the schools history and was selected to the “All American Collegiate Baseball Team”.

While at Princeton, Ray met and became very friendly with Charlie Caldwell, the Varsity football coach. Both men’s lives have paralleled one another over the course of the years-both attended Yonkers H.S., received scholarships to Princeton, pitched for the Princeton Baseball Team and are now honored members of the Yonkers Sports Hall of Fame.