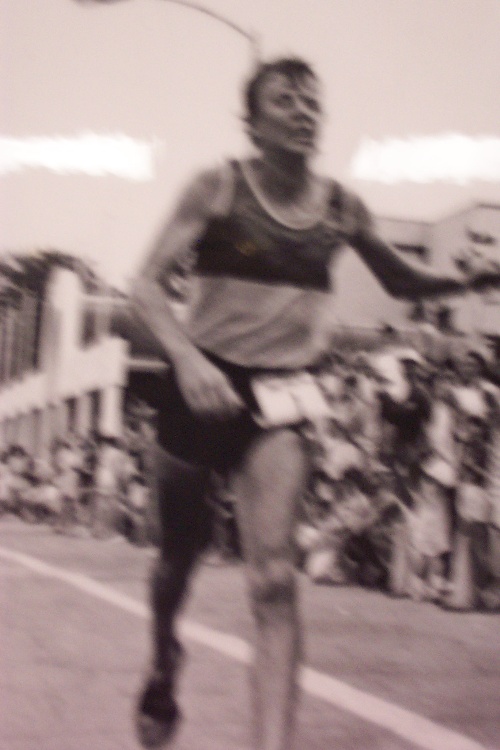 John J. Kelley was born December 24th, 1930 in Norwich, Connecticut. He attended Bulkeley School in New London, where he lettered in track and Cross-Country for four years. In his junior year he won the State Title and added the NE Cross-Country Title to his list of accomplishments.

John attended Boston College from 1950 to 1954 where he captured two NE Cross Country Titles, the IC4A title at Van Cortlandt Park, and placed 2nd in the 1953 NCAA finals.

While at Boston College John started competing in marathons. In 1953 and 1954 he placed 5th and 7th respectively in the Boston Marathon. Both times he was the first American finisher.

In 1956, he placed 2nd in the Boston Marathon. Once again he was the first American finisher. Also in 1956 he won his first of eight consecutive Yonkers National (AAU) Marathon Championships. 1956 proved to be a banner year for John Kelley as he was named to the Olympic Marathon Team. He finished 21st in Melbourne, Australia.

In 1957 John won the Boston Marathon in 2:20:05, setting a new course record on the remeasured course. While continuing to win Yonkers through 1963, he also captured National AAU titles at distances from 20 to 30 Kilometers and the 1959 Pan American Marathon in Chicago.

In 1960, John Kelley won the Yonkers Marathon in a record time 2:20:13. As of 1990, 30 years later, his course record still stands and has never been seriously challenged. His winning time at Yonkers placed him for the second time on the Olympic Team. He finished 19th in Rome, Italy.