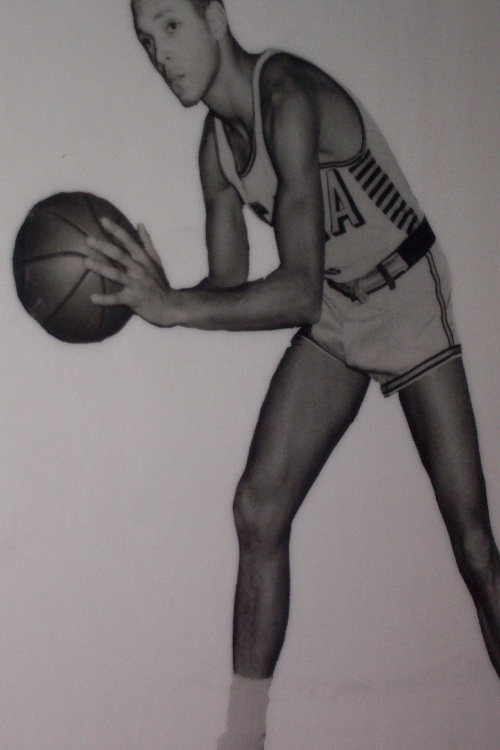 Timothy Hill, Jr. a 1989 inductee into Westchester Hall of Fame for basketball and track, and currently a resident of Ossining N.Y., was born in Yonkers, N.Y.; the eldest of four children of Timothy, Sr. and Irene Hill. The earliest phase of his education took place in the Yonkers School System, from elementary through high school.

Even as a youngster Tim showed evidence of superior athletic abilities. As a fourteen year-old, he established a record in track for the 60-yard dash, sprinting to an incredible 6.8 sec. Time. However, it was at Gorton H.S. in Yonkers that Tim’s athletic accomplishments began to be recognized as superb. Not only was he three-year varsity in cross-country, track and basketball, but Tim set records in the latter two sports, which held for many years. He was an All-City, All County, and All-American Selectee in track.

Tim held fourteen titles, including: 440yd dash: 51.2 sec.: (a city record); Broad jump: 22’ 3”(He held a state title for three consecutive years); 220 yd dash: 22.2 and 21.3 sec. For his extraordinary feats in this particular event, Tim was selected to the National Scholastic All-American Track Team at 220yds, the only high schooler in the nation to be so chosen. He held the city, county, state and national titles in the 220-yd event, culling thirty-five consecutive wins at one stretch.

In basketball, Tim obtained All-City selection. By the time he graduated from Gorton H.S., he held three standing basketball records, and also every scoring title in the history of Yonkers’basketball, averaging 24 points per game during his senior year. In spite of competing in all of these sporting events, Tim had time to serve as president of his sophomore and junior classes, as well as the vice-president of the Westchester county Students’Council Organization during his senior year.

At Siena College Tim became the only freshman in its history selected to a varsity basketball team. Since the school had no track team, he directed his energies into basketball, where a rigorous schedule had his team competing in Division 1 play with powerhouses such as: Georgetown, Louisville, St.Bonaventure, Western Kentucky, and Niagara. Tim was selected to All-East (1955,56) and All- America (1955,56) teams. By the time he had finished at Siena, he had set six offensive records, including: most points in a game (34), scoring average (20.9), career points (1,092) and most foul shots in a single game.

Following graduation from Siena, Tim was drafted by the St. Louis Hawks as well as the Detroit Pistons of the NBA; then by the U.S. Army. He served his country honorable for two years, from 1956-58, and participated as one of a select group of an All-Star Basketball Team, which included notable players such as: Tom Gola (LaSalle), Sihugo Green (Duquesne), and Alvin Clinkscales (Harlem Globetrotters). They accomplished a phenomenal win record of 43-1, capturing the national title in 1957. The following year, the All Far East, Team which was the overseas counterpart, and on which Tim was a first team all-star selectee, won the All-Far East Championship.

He was inducted into Siena College Hall of Fame in 1970.