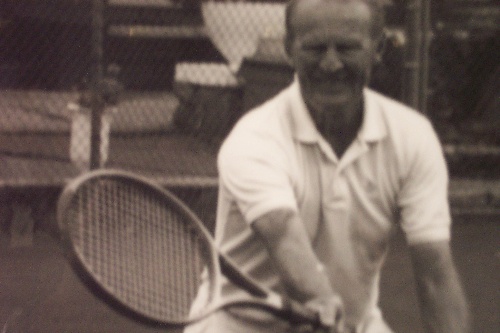 He first became interested in tennis while at Stuyvesant H.S. in NYC where he was captain of the tennis team. In 1925 he entered New York University and became captain of the tennis team in his senior year. While at NYU he competed in tennis tournaments winning amongst others the New York State Intercollegiate Championship, the Metropolitan (NYC) Indoor Championship and the Yonkers Championship. During this period he played in the Men’s National Championships at Forest Hills three successive years. Upon graduation from NYU he attended law school and ceased playing tournament tennis. He was a practicing lawyer from 1923 and in later years a Professor of Law at the City University of New York.

He continues playing weekend tennis at the Park Hill Racquet Club, and instructed his four children in the game of tennis. His oldest son, Edward Jr. became captain of his Fordham Prep and Georgetown University tennis teams. George, his younger son, became captain of his Fordham Prep and Fordham University tennis and squash teams. Ed’s daughter Joan, won the MILT Championship for 12, 14, and 16 year olds. All three were ranking eastern players.

In 1956, Ed returned to tournament play and at the age of 46 was a finalist in the National Veterans Indoor Tennis Championships in singles and in doubles with Jefferson Mendel, also a Yonkers resident.

Although he had been a ranking Eastern and National Player many times over the years, in 1988 he achieved a life long ambition when he ranked #1 nationally in the 80’s singles category with different partners.

It is estimated that during his long and illustrious tennis career, interrupted only during World War II when he served in the U.S. Army, he won over 100 tennis tournaments.

At age 81, he is still an active tournament tennis player.