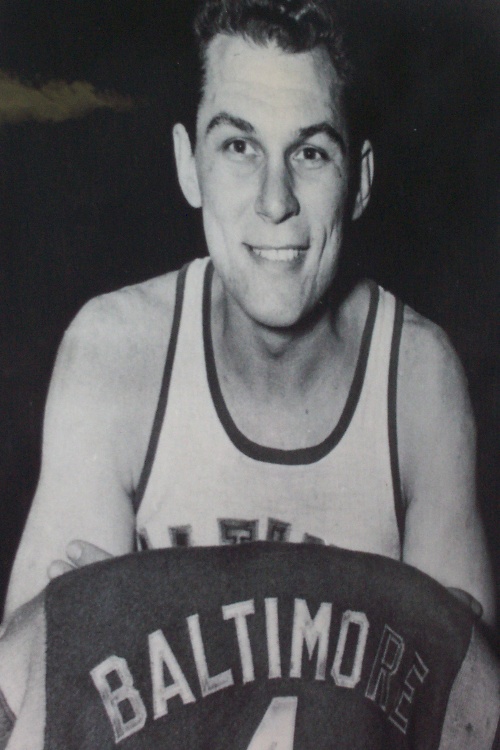 Joseph Dolhon was born in Yonkers on July 9, 1927, one of five sons of William and Nancy Dolhon. At a very young age his eldest brother, Michael, taught Joe the basics of the game of basketball. He began playing organized basketball at St. John’s Church in Getty Square.

In 1943, Joe began his athletic career at Saunders High School. As a captain of the varsity basketball team (1943, 1944 and 1945), he led Saunders to three consecutive Yonkers Basketball Championships. He was elected to both the Yonkers All City Basketball Team and the Westchester All County Basketball Team in 1944 and 1945. Joe was also the City of Yonkers foul-shooting champ for three consecutive years with a combined 96.7 shooting percentage (174 out of 180).

In 1945, Joe accepted an athletic scholarship to attend New York University. He played four years of varsity basketball at NYU participating in the 1946 NCAA and NIT Tournaments. As a cornerstone of the 1948 NYU team, which amassed a school regular season record of 19 consecutive victories, Joe was selected to the All Metropolitan team and as an alternate of the on the United States Olympic Basketball Team. Elected captain of the 1949 NYU team, Joe’s play and team leadership earned him his second all Metropolitan team selection, membership on the All team, and All American status. Joe finished second in the voting for the 1949 Hagerty Award (won by Dick McGuire, St John’s University).

Drafted in 1949 by the Baltimore Bullets, Joe became the first basketball player from the City of Yonkers to play in the National Basketball Association. Joe participated during the 1950 and 1951 seasons scoring 6.4 points per game, but was better known for his aggressive style and defensive prowess. March 2, 1950 was declared “Dolhon Day” in the City of Baltimore to acknowledge his athletic and community service contributions.

Joe’s basketball career appeared to end when he was drafted for military service in 1951. While serving his country, Joe still found time to lead the Fort Meyers ( Arlington, Virginia) basketball team to the U.S. Military Basketball Championship. After being honorable discharged from the service, Joe became a New York City School teacher and basketball coach.

As a coach, Joe led his Junior High School playoffs for 15 consecutive years, before retiring from coaching, but continuing to teach.