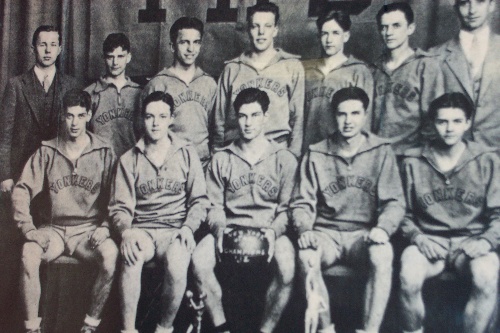 The record breakers! They shattered more standing records than any other team in the history of the school. In addition to this distinction they are the third Yonkers High School team to win the New York State basketball championship.

Led by the invincible Melvin Nelson as captain, and coached by the incomparable Leslie E. Beck, the “Semi – Centennial Five” as they choose to be called, were all that one school could hope for. (Editor’s note: according to coach Beck, this team was known as “The Merriwell Five”). Captain Nelson set a new high record for individual scoring in sectional games. The team itself created for Yonkers a new mark of 12 state tourney games of competition, one more than the former state record. By winning the title again, Yonkers has the distinction of being the only school in the state to have possessed the crown three times.

The above article, written in 1933, referred to the “permanent champions” of New York State because for a variety of financial and practical reasons, statewide competition in basketball was suspended in 1932 (not to be resumed fully until 1979) so Yonkers High School technically did hold the state championship for 47 years. However, in the intervening period the Bulldogs captured the highest honor possible – The New York State Section One Championship on seven different occasions. Coach Beck’s men continued to dominate the basketball scene with successive championships in 1933 and 1934. Many observers considered these quads capable of taking the state championship as well, if it had been offered, so the “permanent” trophy residing in the trophy case at YHS was correctly located.