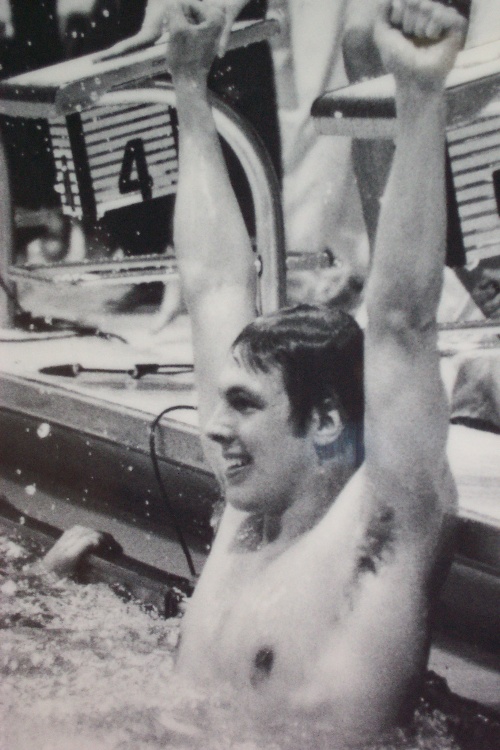 Bobby Hackett was born in Yonkers, New York on August 15, 1959. He learned to swim at the age of 5 years at the YMCA. As he paddled around in the pool at Phillipse Towers on Riverdale Avenue, Diane Saunders, a lifeguard at the pool who thought he showed potential as a competitive swimmer, noticed him. Diane introduced Bobby to Leo Butler and he trained at the C.Y.O. pool under Leo Butler for six years, learning all the different strokes and developing a desire to excel.

Bobby started his competitive swimming career at the age of 8 years by entering the Yonkers Aquatic Council swim meets at the Linden Street Pool, and swimming for the Jewish Community Center Swim Team. At the age of 10 years he won the High Point Trophy at the Westchester County Swim Championship at Playland Pool, and set three new Metropolitan Junior Olympic records. He thereafter joined the White Plains YMCA Swim Team, which was coached by Leo Butler, Jr.

At the age of 12, swimming for the Gator Swim Club coached by Joe Bernal, he set 10 new Metropolitan age group records, represented the Metropolitan Region I at the National Junior Olympics and won High Point Trophy at the Westchester Swim Classic for the second year.

At the age of 14 years he was named Men’s Metropolitan Swimmer of the year; set 16 Metropolitan Age Group Records, qualified and competed in the AAU Short Course Nationals in Dallas, Texas and the AAU Long Course Nationals in Concord, California. He was named the Top Male Age swimmer in the United States, breaking 8 National Age Group Records, having number 1 ranking in 10 events and 16 total rankings. His extraordinary accomplishments have not been in just one event, one distance or one stroke, and all were accomplished by training in less than ideal training facilities.

After the Olympics Bobby finished his high school career at Fordham Prep by being named Outstanding Swimmer at the Catholic Nationals and being named Prep All-American in each of his four years. He then went to Harvard University and competed for the Harvard Varsity Swim Team for four years, gaining 12 All-American Ranking and being voted Team Captain in his senior year. As a final tribute, he was awarded the “William J. Bingham Award” which is awarded to one member of the graduating call who “through academic and athletic integrity, courage and ability has best served the high purpose of Harvard as exemplified by William J. Bingham”.