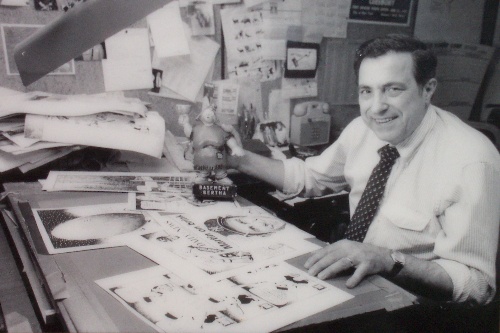 William (Bill) Gallo was born in Manhattan on December 28,1922, the son of Frank and Henrietta Gallo. His father was a newspaperman who died at the young age of 36 when William was11 years old.

Young Gallo’s fondest dreams were to follow in his father’s footsteps, hoping to pursue a career as a newspaperman. “As long as I can remember, printer’s ink was a part of me,” he says. He studied art in high school and after graduation applied for a copyboy’s job in every newspaper (there were eight at that time in New York City). He landed a job on the New York Daily News in 1941, where he remained for seven months until he answered Uncle Sam’s call, joined the United States Marine Corps, and went off to war.

He served with distinction as a member of the Fourth Marine Division for four years, seeing action in Roi-Namur (Kwajelin Islands), Saipan, Tinian and Iwo Jima. When the war ended he returned to the New York Daily News as a “picture clerk” in the caption/art department.

In 1960 he was transferred to the sports department, and here he began his illustrious career as a sports columnist. It was here, also, that he was to develop such well known characters as “Basement Bertha, “Yuchie,” “Bernie the Bulgarian,” “Penthouse Polly,” “General Von Steingrabber” and “Two Kids Talkin’ Sports”-familiar personalities to hundreds of thousands of readers.

Bill Gallo’s fame as a cartoonist spread throughout the nation and in the following years his creativity brought him many honors, awards and citations. He is the five-time recipient of the coveted “ Reuben,” awarded by the National Cartoonist Society for excellence in the sports category. He has won the Page One Journalism Award from the New York Newspaper Guild sixteen times. Among his other prestigious honors is the Power of Printing Award, the Segar Award as the outstanding cartoonist in 1975 and the Achievement Award for Alumni from the School of Visual Arts. He has also won fame as an authority in boxing and his colleagues have honored him with the James J. Walker Award. He is also the recipient of the Champions Award from the Downtown Athletic Club.

Bill Gallo is married to Dolores and they have two sons. The oldest, Gregory is the sports editor of the New York Post, while Bill, Jr. is the Steeplechase Racing Secretary at the Belmont Racetrack.

Gallo, who is currently marking his 23rd year as a cartoonist-columnist for the New York Daily News, moved his family to the City of Yonkers some 25 years ago. His more than 5,000 cartoons and his innumerable sports columns have brought much honor and prestige not only to him and to his family, but also to his profession and to the City of Yonkers as well.