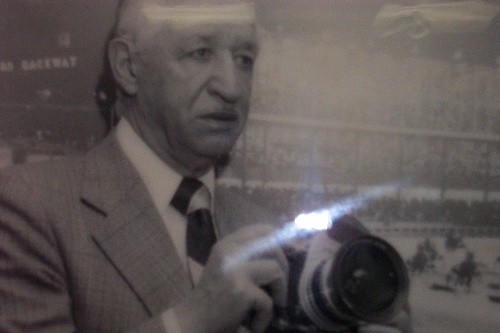 Michael Cipriani was born in Boomer, a coal-mining town in West Virginia on September 1, 1914 and raised transient –style in Cincinnati, Chicago, Columbus, Ohio and Harlan County, Kentucky. In the 1930’s the Cipriani family moved to the City of Yonkers and it was here young Michael switched from slinging ice in his father’s business to toting a camera, a Speed Graphics, the type used then by all newspaper photographers.

Almost from the start of his fascination with cameras, Cipriani went on servicing many of the New York City daily papers with news and feature photos from the northern suburban area. He was a virtual free-lance Westchester photo service bureau.

In 1955 he won a photo award in an annual competition sponsored by the New York daily News for his coverage of an auto mishap and in the same year signed on full time with the Yonkers Raceway, then in its fifth year of operation as a standard bred plant. He has photographed thousands of races, including every Cane Pace and Yonkers Trot since these prestigious events were inaugurated the year he joined the track.

“Harness racing has been so good to me,”says Cipriani, who relates the simple ethic by which he lives – “My father once told me, whatever you do, you’ve got to be the best. I’ve always lived to apply that to my photography”.

His job as an outstanding photographer of horses has taken him to many ports of call-Paris, Rome, Stockholm, Brussels, Amsterdam, Frankfort, Moscow, Australia and New Zealand.

In addition to shooting a quarter of a century of racing at one of the nation’s foremost tracks, Cipriani has also focused on a multitude of other subjects. He has covered a dozen Miss American pageants in Atlantic City as well as clicking his shutter on scores of governors, residents, movie stars, musicians, boxers, baseball players, and other athletes and celebrities. And, of course, he has been always on hand for any sports event of importance taking place in the City of Yonkers.

Mike Cohen, publicist, sports information chief for the NBC television network, and well-known public relations counsel, refers to Cipriani as a “great artist. You can tell his work without a signature. Nobody can equal the quality of Mike’s pictures in racing. He’s inventive, ahead of his time. He’s lengths ahead of everybody else.”

Michael and Mary Domenico Cipriani are the proud parents of one son, Ralph, a former member of the FBI, currently an attorney with a statewide reputation.