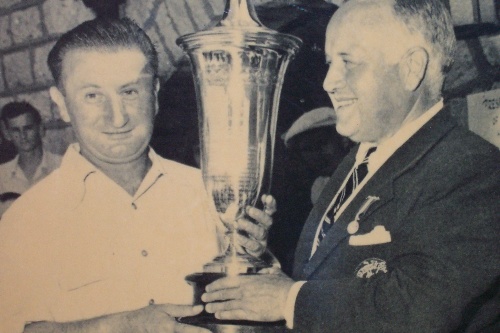 Stanley J. Bielat was born in Yonkers at 52 Mulberry Street on January 11, 1913 and attended the St. Casmir’s School and Saunders Trades School. His first introduction to golf was at the age of twelve when he brought lunch to his brother, Anthony, a caddy at the Dunwoodie Golf course. He followed in his brother’s footsteps, becoming a caddy and at the same time, a self taught golfer analyzing players, their strokes and techniques. At the age of fourteen he was hitting 75 scores on a regular basis. He became so proficient at the game that he won the Dunwoodie Golf Course and the Winged Foot Golf Course Caddy championships and in 1930 finished second to the great Willie Turnesa when they both competed in the Westchester County Caddy Championship at the Oak Ridge Golf Course.

From 1941-45 he served with the U.S. Army as Staff Sergeant in the Medical Department in Saipan, taking time to compete in All Pacific Army Golf Tournaments, reaching the quarterfinal round. At the age of 35 his game began to fall into place and he won the Yonkers City Golf Championship in 1948. In 1949 he qualified for the National Public Links Championship in Los Angeles. The following year he reached his highest potential when he stunned the golfing world by not only qualifying for the 36th National Public Links Championship in Louisville, Kentucky, but by topping 210 of the country’s leading public links champions to win the national title. On his return to Yonkers he was given a city-wide parade up South Broadway with Mayor Kris Kristensen serving as Grand Marshal. That same year he was voted “Yonkers Sports Personality of the Year”. He also garnered the Westchester County Public Links crown on the Sprain Lake Course.

In 1958 he won the coveted Doc Rosen Memorial Trophy at the Dunwoodie Golf Club, emblematic of the public links championship of Yonkers, and repeated five years later. In 1962 he was crowned Yonkers Public Links Champion for the second time. Illness forced him to forego competitive golf for the next decade but he came back in 1977 to win the public links championship of Eastchester at the Leewood Country Club and repeated in 1978. In 1979 he captured the Westchester County Senior Public Links title in Maple Moor, White Plains for golfers 66-71 years of age during and the same year won the Red Klein Memorial Public Links Tournament in Mohansic.

Through the years he has represented the metropolitan area in National Public Links competition in Los Angeles, Louisville, Milwaukee, Seattle, Dallas, Honolulu, Buffalo, Detroit, Sacramento and Hershey, Pennsylvania. He also won national recognition when he defeated one of the world’s leading professionals and winner of the British Open, Tony Lema, who was touring the United States