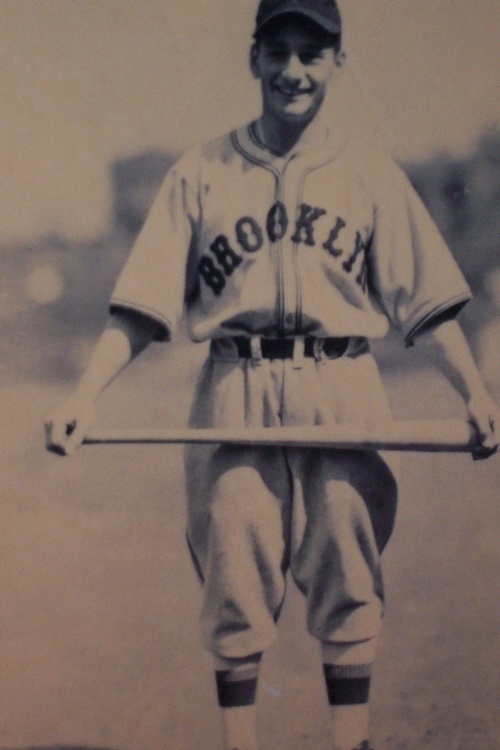 Nick Tremark was born in Yonkers on October 15,1912 attended school No.2 and had his first baseball experience at the age of 15 with the Cook Post American Legion team which won the New York State Championship at Yankee Stadium. He was a star outfielder with Yonkers High School in 1929 and 1930 and played with the Bruins, Chippewas and Seventh Warders in the Yonkers Baseball League, winning the batting championship in 1933. He played freshman and varsity baseball at Manhattan College, serving as captain during his senior year. His stellar play at Manhattan earned him all metropolitan, all-eastern and Number One College Player of Eastern Colleges honors.

He graduated from Manhattan in 1934 and was immediately signed by the Brooklyn Dodgers and played under Casey Stengel for three years. Stengel adopted him as “his boy” and used his 5 foot 43/4 inch outfielder, the shortest player in the major leagues at that time, mainly as a pitch hitter. In fact, in his first appearance at the plate, which took place at the Polo Grounds, he singled off Hal Shumacher, the ace twirler of the New York Giants. Some of his runs scoring hits were off baseball’s greatest pitchers – Paul Derringer, Dizzy Dean, Lon Warnecke, Hugh Mulchey and Roy Parmalee.

During and after his tenure with the Dodgers, he was farmed out to various International Leagues, American Association, Southern League and class AA and A team where he performed brilliantly at bat and in the field. He batted .333 with Reading; was voted the second most valuable player in New York- Pennsylvania League while batting .379 with Allentown, driving in 108 runs and stealing 25 bases; batting .363 with Hartford where he finished second to Tommy Holmes who later led the major leagues in batting; hit .315 for Wilkes Barre; played with Little Rock and Louisville and retired in 1940.

In 1943, he joined the U.S. Navy and won fame as the player –manager of the Pensacola Naval Air Base Team which included the immortal Ted Williams and Bob Kennedy of the Chicago White Sox. Nick also played with the Sampson, New York Recruit Training Base and played and managed the team at the Norfolk Naval Training Base. After his separation from service in 1946, he played with the outstanding semi-professional ball clubs in the metropolitan area-the Mount Vernon Scarlets, Springfield Greys, Bushwicks and Yonkers Leaguers.

In 1956, his family moved to Harlingen, Texas to enter the restaurant business. In his leisure moments, he completed his teacher certificate and for fifteen years taught in Texas Public Schools and at the Marine Military Academy, a private educational institution.

In 1967, he retired from teaching and turned his attention to tennis where he has won over 75 trophies. For two years, he has been ranked No. One in the State of Texas in singles and doubles play in the 65 year and older division.