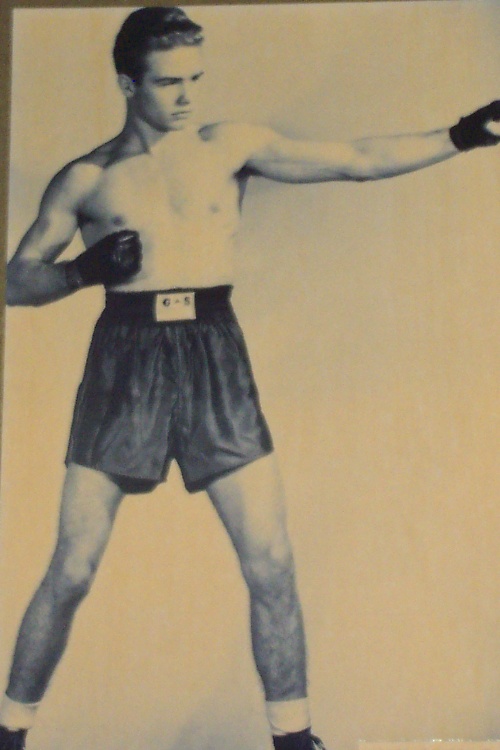 Roger Donoghue was born in Yonkers on November 20, 1930 and spent the early part of his life at 277 Nepperhan Avenue, later moving to the corner of Ashburton Avenue and North Broadway where he spent his teen years. He graduated from St. Joseph’s School, attended Gorton High School as a freshman, and transferred to Saunders Trades and Technical High School where he graduated in 1948. To assist his family during difficult financial times he worked as a newspaper carrier for the Herald Statesman and later as a delivery boy and clerk for Fleck’s Grocery on Locust Hill Avenue.

At this time he was introduced to boxing at Bob Melnick’s gym located over Bickfords’s Restaurant in Getty Square. Bob had the ring portion of his billiards parlor partitioned off and here he gathered together a stable of amateur boxers who represented the Yonkers Police Athletic League in AAU competition throughout the metropolitan area. Rodger, a natural middleweight proved the star of the stable winning 29 of 31 amateur bouts from his 16th to 18th birthday. On November 20, 1948 he turned professional and won his first fight for pay at the Ridgewood Arena. One year later he fought his main bout, his 12th straight triumph, a decision over Tommy Englehart.

In January of 1950 he made his debut in the White Plains County Center becoming an immediate county and metropolitan district idol. Here he downed tough Jimmy Demetrious in a slugfest in which Yonkers’ most popular fisticuffs was floored with the first punch of the fight, got off the canvas to knock his opponent through the ropes and finally scored a knockout in the sixth round. He was now the most highly sought after middleweight in the Middle Atlantic States.

His slugfest with high-ranking Lou Valles at the Ridgewood Grove enhanced his reputation. Rodger floored his opponent in the sixth round, ran out of steam in the 7th and the referee then put a halt to the bloody proceedings. Dick Young, sports editor of the N.Y. Daily News, titled it the “finest club fight of the year”

In August of 1951 Roger made his deput in Madison Square Garden, fighting the semi-final to the Kid Gavilan-Billy Graham worlds welterweight championship fight

A tragedy of national and international import occurred when Rodger’s opponent, the highly ranked George Flores, underwent brain surgery after the bout and died on the operating table five days later. Yonkers sports organizations and friends joined in raising funds for the fighter’s widow and son. Roger donates the purse from his following bout to the Flores family. Shaken by the horrendous tragedy Roger carried on for three more fights but following a listless loss to Red De Fazio in Madison Square Garden he walked away from the ring forever. During his brief, meteoric career he scored 26 wins, one draw and four losses in 31 professional fights. He remained active in Yonkers sports circles and youth programs until he moved to California in 1955 to serve as an assistant director and tutor to Marlon Brando in his Academy Award winning film, “On the Waterfront”.

On his retirement from the Hollywood scene he returned to New York to work sales management for Rheingold Breweries. At the present time he is sales manager for Star Liquor Dealers. For the past 18 years he has been married to Fay Moore, a prominent sports artist and they both reside in Manhattan.