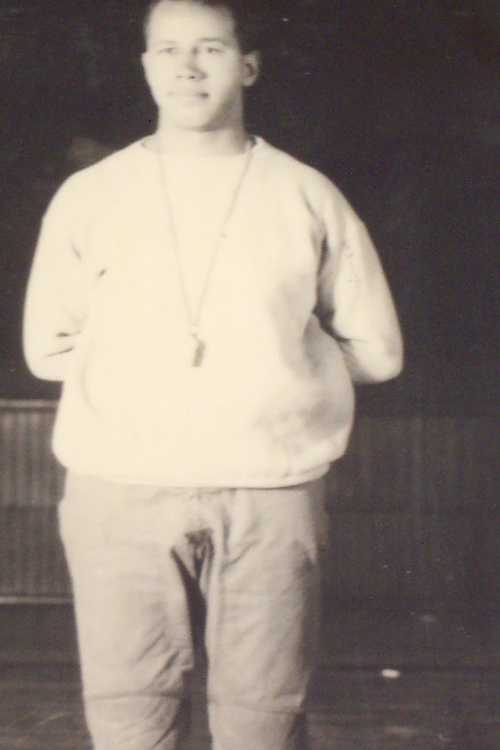 Theodore H. Smith was born in Yonkers on March 23, 1905 and began his athletic career at Yonkers High School where as a member of the track team he won the pole vault at the Westchester County and at the New York University Interscholastic Track and Field Championships.

Smith (Tedo or Ted) transferred to Gorton High School when that school opened and became its first track team captain. Here he set records in the pole vault, 100yard dash and high jump as well as scoring in the 220 and 440-yard dashes, broad jump and mile relay. For two consecutive years he won the New York Herald Tribune gold medal as the outstanding point getter in the annual Westchester Track and Field Championship. At Gorton he also played football and was selected in the All Yonkers Team as a running back.

He represented the Hollywood Inn Club at local and AAU meets, winning the “outstanding performance” trophy while setting city records in the 100-yard and 440 yard dashes in the annual Fourth of July games. He won the gold medal for the broad jump at the 1926 Sesquicentennial International Exposition Industrial Games at Philadelphia while wearing the colors of the Otis Elevator Athletic Association.

As a freshman at Syracuse University he played football, competed in the pole vault, broad jump at the 1928 Olympic tryouts. He still holds the all time Syracuse in-door broad jump record. As a member of an outstanding mile relay team he was often seen at Madison Square Garden meets and also at the indoor lC4AA Championships. At Syracuse he was the recipient of the Tom Keane Award as the University’s most versatile and valuable trackman.

In 1934 he accepted the head coaching job at St. Paul College, Lawrenceville, Virginia where he turned out winning football, basketball and track teams. In Yonkers he coached the AME Zion Senior Basketball Team in county competition and formed the Church’s first girls basketball team.

Theodore H. Smith was a co-founder of the first Black Community Center in Yonkers and served as a director of the Yonkers Police Athletic League.