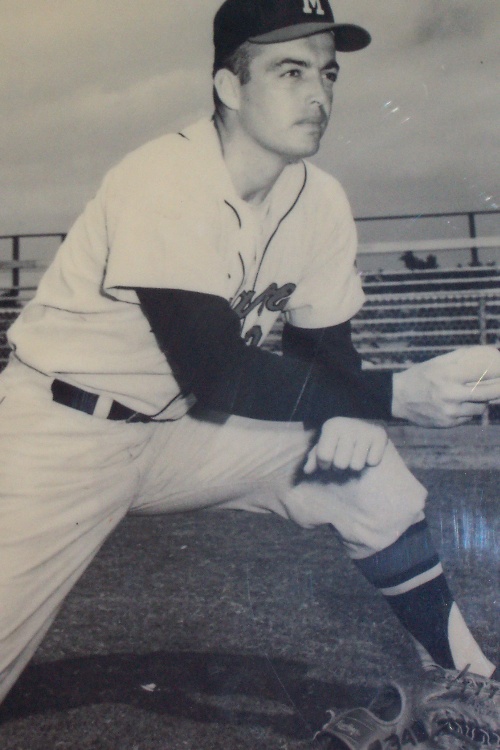 Henry “Hank” Fischer was born in Yonkers in 1940 where he started his sports career with the St.Paul’s Midget League basketball team in the YMCA League, leading them through three undefeated seasons and setting a record high score of 53 points during a playoff game. At Roosevelt High School he led the city in scoring during his senior year and later at Seton Hall led the University freshmen team with an 18 point per game average.

Hank lost his eligibility to play college basketball when he signed a professional baseball contract with the Milwaukee Braves of the National League. He had become interested in baseball during his late teens when he pitched for the American League team that advanced to the Nationals finals in 1957. He pitched two years for the undefeated (35 games) Connie Mack Eastern Championship team.

In 1957, at Roosevelt High School, under the fine coaching of Joe Seidell, Hank led his team to the city crown, hurling three no-hitters enroute. He was named the first recipient of the now annual Louis J. Flower Memorial Award, given to the city’s outstanding high school athlete.

As a Major League pitcher through the ‘60’ s Hank twirled in 165 games with Milwaukee Braves, Atlanta Braves, Cincinnati Reds and Boston Red Sox. He had a total of 550 innings pitched and a career strikeout total in the Major Leagues of 365. Although he was a starting pitcher throughout his earlier career, the Braves had a need for strong relief pitching and Hank spent most of his major League career as the first man out of the bullpen.

In 1964 the need for a starting pitcher for the Braves became evident in spring training, so Hank came out of the bullpen and did an outstanding job, winning 11 games with over 100 strikeouts for the year. This same year produced Hank’s strongest accomplishments in his Major League career. He had five shutouts in his 11 victories and finished second in the league to Sandy Koufax in the category. During the 1967 season with the Boston Red Sox Hank reached his ultimate goal – to play with a Major League pennant winner and compete in a World Series.

Unfortunately, this also became his last year baseball. Due to a shoulder injury, Hank’s career ended at the age of 28, when most Major League pitchers are just coming into their prime years. After his forced retirement Hank and his family headed back to West Palm Beach, Florida where he spent 10 winters in spring training camps.

Here he remains active in athletics as a strong tennis competitor. He still retains a dream of someday becoming involved in coaching on a high school or college level