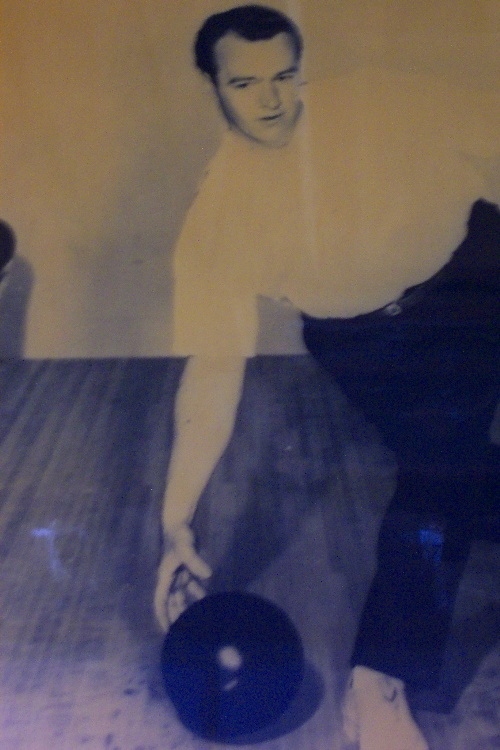 Ralph Engan was born in Brooklyn, New York, on October 6, 1928, but he and his family moved to Yonkers when he was one and one-half years old.

Ralph’s father, John, was a great bowler, known up and down the Eastern seaboard, and he had many scrapbooks attesting to his various feats and to the honors Bestowed on him for his bowling prowess. Young Ralph was designated as the “keeper of the scrapbooks” and it was his assignment to cut the newspaper articles and pictures of his dad. He made certain that the books were neat and orderly and kept up-to-date and it was through these scrapbooks that Ralph developed an interest in the game. This interest was heightened when he accompanied his father on his travels to various competitions.

When he was16 years of age, Ralph asked his father to teach him how to bowl (one was not permitted on the premises of a bowling center until that age). His request was refused with gentle reminder that it was a “back alley” sport and that there was no real future in it. This did not deter Ralph and he obtained a job as a pinboy in the American Legion Lanes in Yonkers where a fellow by the name of Bill Tomilnson taught him the techniques of bowling.

For the Past 33 years Ralph has been a prominent name in bowling alleys throughout the nation. He is the holder of numerous titles, 56 in all, including the 1950 Metropolitan Singles, Doubles and All Events championships. He was the Yonkers City Singles Champion four times. In 1957 Ralph was a member of the New York Championship five man team: in 1963 and 1964 was the New Jersey State five man and Doubles Champion; in 1963 was the Bowling Proprietors Association of America Match Game Champion and in 1964 was crowned the New Jersey Golden Pins Champions.

For winning many tournaments and titles he was named “Metropolitan Bowler of the Year” In 1967. He then won the Bowling Proprietors Association of America Championship of Westchester County and was the Tri-County Association Champion nine times. In 1969 Ralph was a member of the National American Bowling Congress Team Champions.

In addition, Ralph has 33 unsanctioned 300 games. Attesting to his outstanding skill if the fact that he has bowled over 100 sanctioned 700 series or better for 19 years in a row, 1965 to 1975, his highest being 218.34. Adding to his many honors is the American Bowling Congress record for a ten game tournament, 2388.

As a professional bowler, Ralph has the distinction of having six pro titles, two nationals, and four eastern regional. He was voted Tournament Committee Chairman for three years and a member of the Executive Board in the professional tour, Ralph Engan was accorded one of the most coveted honors when he was voted the “Steve Nagy Good Guy Award” by his bowling peers.