ALTERNATE SIDE STREET PARKING RULES ARE IN EFFECT. Grace is a highly accomplished Business Owner and lifelong resident of Yonkers. She started Borrani Realty Corporation in 1999, specializing in residential and commercial real estate.  She grew her business from start-up to a highly successful enterprise including a referral network of CPAs, attorneys, lenders, and builders. Grace expanded her expertise through multiple certifications and accreditations, which includes CBR, SRES, ABR, and ECO.

Grace has been a passionate and enthusiastic supporter of the Yonkers community, its residents and its business owners.  She has served in leadership roles with organizations including Yonkers Hispanic Chamber of Commerce, YWCA of Yonkers, Westchester Business Connections, The Women of Westchester Business Connections (Founder), Le Amichi, and First Fridays Women’s Group.

Grace’s involvement in local communities has centered on empowering individuals and business owners, providing them with strategic business skills and benefiting the City of Yonkers through a community of successful entrepreneurs.  Grace’s commitment to Yonkers business owners is part of a broader economic development strategy that ultimately benefits all Yonkers residents through the creation of a favorable business climate.

Grace earned her Bachelors degree in Accounting from Mount St. Vincent’s College and resides with her family in Yonkers.

Zafiro Acevedo was born in Mexico and has been living in South Yonkers for the past three decades. Acevedo graduated from the Art Institute of Philadelphia with a Bachelor's Degree in  Multimedia Graphics. Within her career she has worked with companies such as: MTV Networks and 4kids Entertainment in the Animation Department. Acevedo has worked for the last fifteen years with non for profit organizations such as, art centers, museums, public libraries, parochial and public schools in providing educational, culture, and tradition in Mexican Folk Art and Performing Arts within the New York tri-state area, Westchester County, Putnam County, Rockland County, Duchess County, and Ocean County, New Jersey. 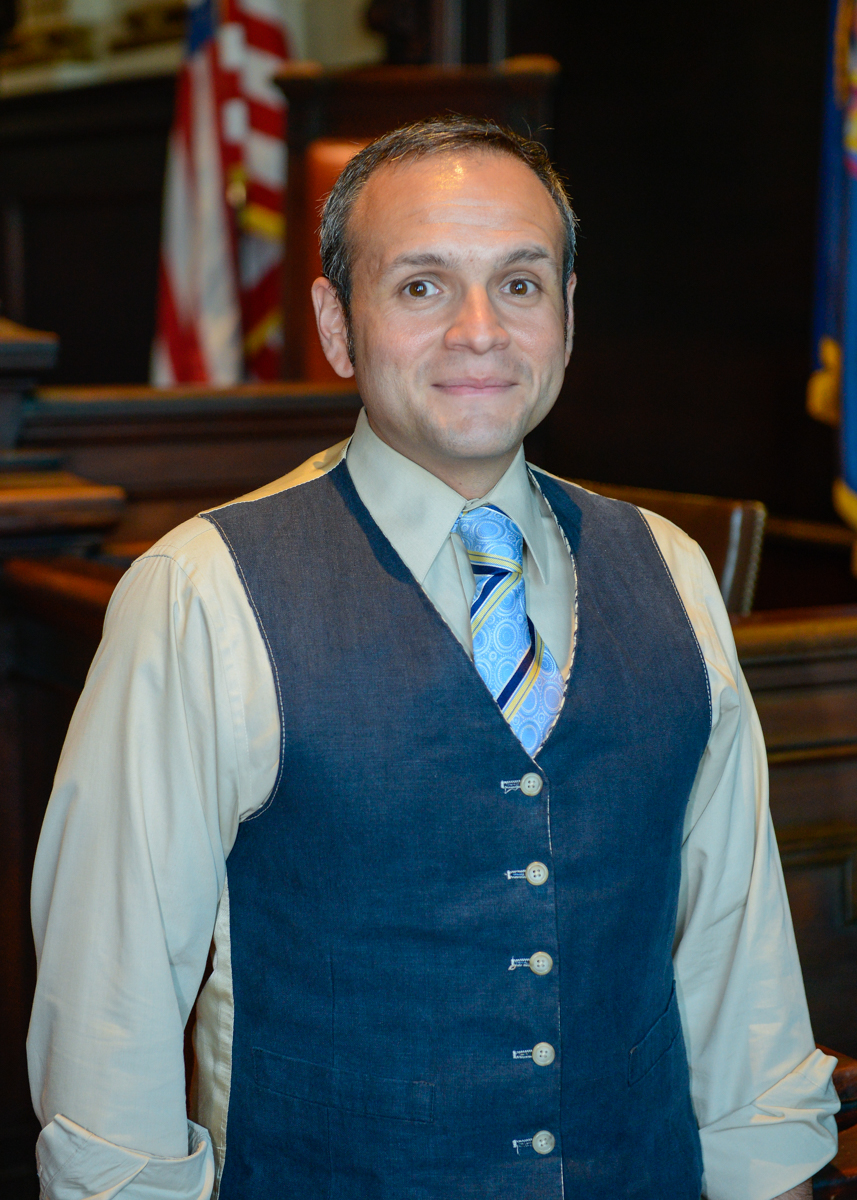 Edgar Santana is currently serving his first term as Vice-Chair of The Mayor's Hispanic Advisory Board.

Edgar is an active community leader as well, serving as a Trustee of the Yonkers Public Schools, volunteering with the Exchange Club of Yonkers, Yonkers Hispanic Advisory Board, Growing Economic Opportunities and Building the Future Foundation.

He lives in the Colonial Heights section of Yonkers, with his wife Anietra Guzmán-Santana, their twin daughters Catalina Edele and Aviana Loren and their dog Teddy, a rescue from the Yonkers Animal Shelter. 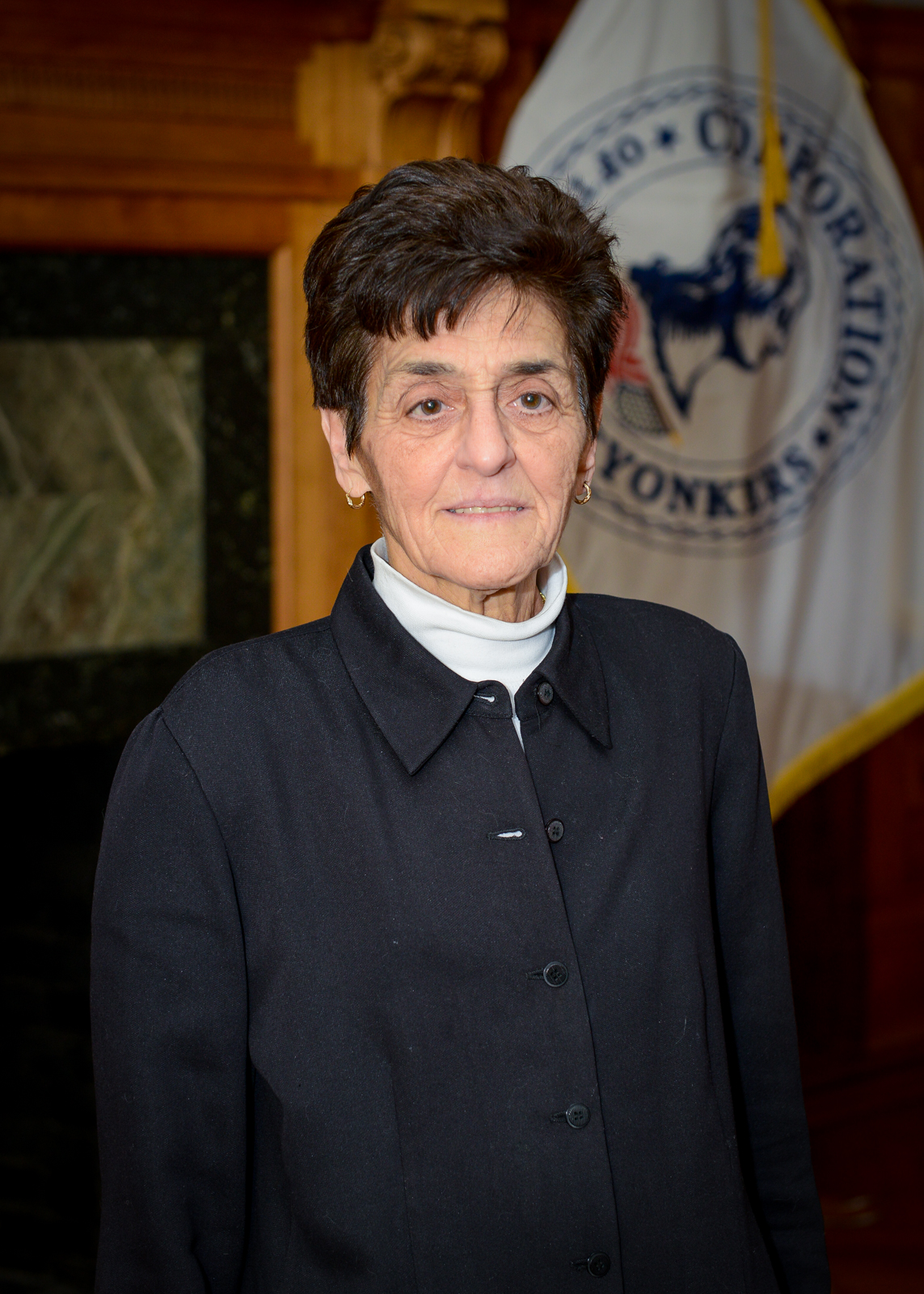 A life-long resident of Yonkers, Linda has worked at local hospitals for over 36 years before joining the staff and students at VIVE School/ Pathways to Success, an adult educational program in Yonkers. She is currently a counselor manager at VIVE.

Linda's primary focus is the health and welfare of the Hispanic community. She serves on various community boards and organizations. 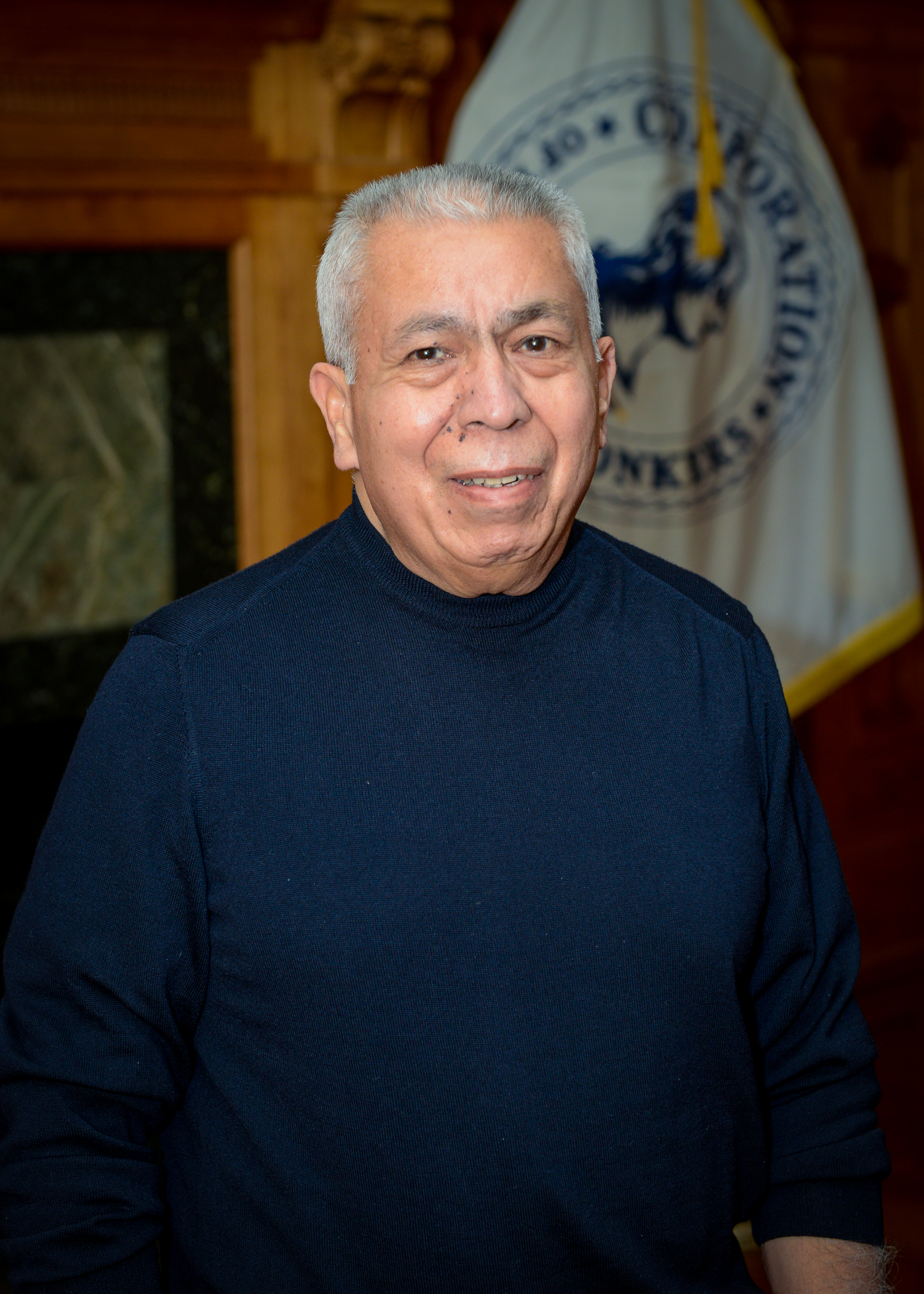 Carlos Vargas was born in Puerto Rico, and has been living in Yonkers for more than 28 years. Vargas graduated with a B.B.A from Baruch College in Manhattan, and is currently serving as the general manager of the Rincon Real Estate Corp. 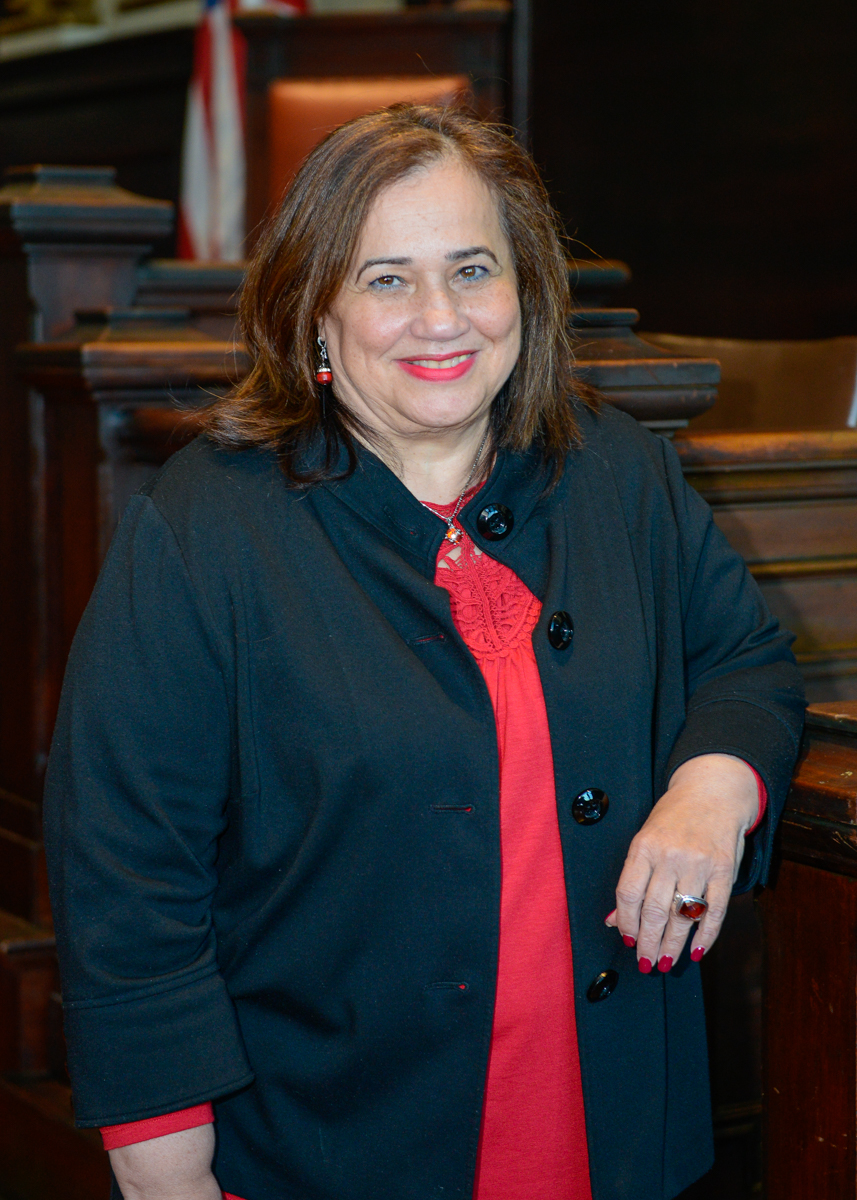 Carmen Goldberg is currently serving her first term as Chair of The Mayor's Hispanic Advisory Board.

Carmen Gomez Goldberg was born in San Sebastian, Puerto Rico. She is an entrepreneur and community leader and serves as the Parent Coordinator & Community Affairs Director for the Charter School of Educational Excellence.  Carmen has adopted the Charter School creed that “We aim to inspire that all children can learn.”  Carmen believes that it is never too late to receive a college education, and she has recently obtained a B.S. degree at Concordia College and will continue her education by obtaining an MBA from Mercy College.

Ms. Gomez Goldberg is a dedicated community and civic leader as well as a great public servant. Ms. Gomez Goldberg is a founding member of the 100 Hispanic Women of Westchester, a member of the Hispanic Advisory Board for the Board of Elections and President of the Yonkers Federation of Hispanic Chamber of Commerce. Carmen sits as an advisor to the Bronx Chamber of Commerce. She has served as a Director of the National Conference of Puerto Rican Women, empowering young Hispanic women to stay in school. She is a former President of the Yonkers Puerto Rican/Hispanic Day Parade Foundation Inc. and has been a board member for nine years.

Marisol Mancebo was born in a small town called Pedernales in the Southwestern part of Dominican Republic.  She is the 5th of nine children born to her parents Elsa Rivas and Saturnino Mancebo.  She moved to Santo Domingo to complete her high school and college studies, where she obtained a Bachelor’s Degree in Accounting from the “Universidad Mundial Dominican”.  She continued her education at the “Universidad Catholica Madre Y Maestra” where she received a certification in Cost Accounting.  Marisol was employed by Industria Continental in DR working her way up from  an administrative assistant to the position of Cost Accountant.

In 1992 Marisol moved to Yonkers and in 2005 she began working at the YMCA in Member Services.  Moving her way up quickly, she was promoted to Member Services Supervisor and then to Accounting Assistant.  Marisol returned to school at Lehman College in the Bronx and completed the Accounting Certification program in 2007.  She was promoted to Director of Finance of the YMCA in 2008.  Marisol was recognized by the Yonkers YMCA in 2008 for her dedication and commitment to serving the members of the YMCA and the community of Yonkers at large.

Marisol is the proud mother of  triplets Eileen, Elvin, Edwin and Steven.  She continues to serve as a role model and inspiration to many women in the community.  She believes that dedication to God and family; continued self-improvement and giving back to the community are the foundations of her success.

Steven A Mejia is a graduate from John Jay College of Criminal Justice where he received his degree of Bachelors of Science in Criminal Justice. He has lived a majority of his life in Yonkers where he attended its Public Schools and has now become part of the school system by becoming a teacher and giving back to his community.

Mejia’s primary focus is the education level and proficiency exhibited by the Hispanic community. He would like to ensure children receive the necessary resources they need in order to be successful.

Jim Noriega is the Chief Technology Officer and HIPAA Security Officer for The Center for Family Support {CFS}.  In the history of CFS, Jim is humbled to be the first to hold the title of “Chief” in the agency.  Upon joining CFS in late 2008, he quickly worked to upgrade and enhance the agency’s IT infrastructure.  Jim is a seasoned, well-respected management and technical professional expert with over 25 years of hands-on experience in networking, security, systems management, personal training and community involvement.   Jim holds a Master’s degree in Education and a Bachelor’s in Computer Science.  He is currently working on attaining his CISSP certification.  Jim is a member of the Mayor’s Hispanic Advisory Board for the City of Yonkers and volunteers at his local church as lector and youth minister.  Jim is a proud Persian Gulf War veteran of the United States Army.  He is married and a father to four lovely daughters.