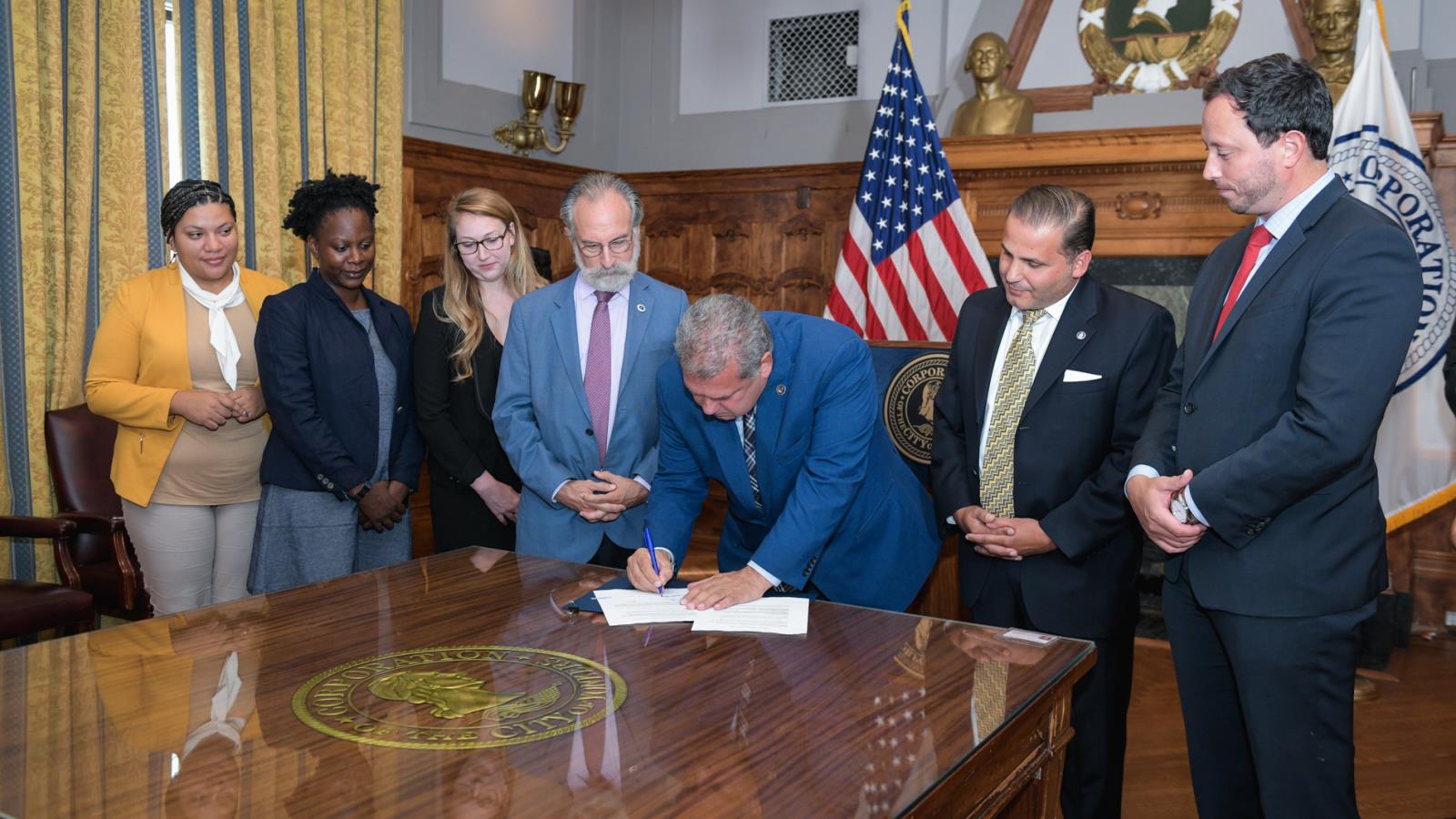 YONKERS, NY – September 18, 2019 – Yonkers Mayor Mike Spano was today joined by members of the Yonkers City Council and local advocates as he signed a new city ordinance into law banning the sale of flavored e-cigarette products in Yonkers. Voted on by the City Council last evening, 7-0, Yonkers becomes the first city in New York State to ban the sale of flavored e-cigarettes, which are now widely accepted as an addicting gateway drug being targeted at youth.

“I am proud that Yonkers led the charge on taking action on this growing epidemic,” said Mayor Mike Spano. “We are tackling this issue head on by placing this ban into law on the local level, which by doing so, limits potential challenges by the courts or being rolled back over time.  I want to thank our City Council President and Councilmembers for courageously taking this effort on – as elected leaders and parents, we have a responsibility to protect our youth and their well-being.”

Yonkers City Council President Mike Khader stated, “I am thankful to the mayor and to my colleagues on the council for getting this done efficiently. This is an epidemic that would most effectively be tackled legislatively and today that is what we have done.  It is our duty to protect our residents and children, and to put people over profit.”

Heather L. Brumberg, MD, MPH, FAAP, Associate Professor of Pediatrics and Clinical Public Health, New York Medical College, said, “The social contribution and lure of flavorings are at the heart of the pediatric vaping epidemic. The consequence is a generation of individuals with unintentional nicotine addiction beginning in adolescence. As pediatricians we hand off to our adult counterparts a huge burden of preventable disease because the marketing of sleek, cool and socially acceptable products beat our initial public health efforts to prevent the disease in the first place. This flavor ban is one step in the right direction to ensure that we pursue regulations to take the necessary steps to protect the health and future of our vulnerable youth and young adults.”

“We applaud the Yonkers City Council for passing legislation to curb the youth e-cigarette epidemic by ending the sale of all flavored e-cigarettes in the city,” saidKevin O’Flaherty, Northeast Region Director for the Campaign for Tobacco-Free Kids. “This legislation is a victory for Yonkers kids and will protect them from nicotine addiction and other health risks associated with e-cigarette use. We particularly applaud the Council for including all flavors in their law, including mint and menthol. This law adds to the growing momentum in New York and across the nation to prohibit all flavored tobacco products and stop tobacco companies from addicting another generation of kids.”

Mimi Boublik, Parents Against Vaping E-cigarettes (PAVe), added, “PAVe fully supports Mayor Spano and the City Council members in their move to ban all flavors. We applaud their efforts to protect our youth from becoming the next generation of nicotine addicts.”

“Students Against Nicotine applauds the City of Yonkers for banning e-cigarette flavors. We have watched our friends become addicted to devices with unknown effects and a variety of dangerous chemical components, as e-cigarette companies appealing directly to our peers with whimsical flavors and other deceptive marketing methods. This legislation will go a long way towards ending the flavor trap and protecting the health of youth,” commented Abe Baker-Butler, Co-Founder, Students Against Nicotine.

The ordinance signed into law by Mayor Spano amends the City’s Consumer Protection Code to prohibit the sale or distribution of any flavored e-liquid or e-cigarette containing flavored e-liquid in the City of Yonkers. Characterizing flavors that would be prohibited for sale include, but are not limited to any fruit, chocolate, vanilla, honey, candy, cocoa, dessert, menthol, alcoholic beverage, herb or spice. The ordinance is set to take effect in Yonkers on October 1, 2019.

The e-cigarette aerosol that users breathe from the device, and exhale can contain potentially harmful substances, including:

•         Ultrafine particles that can be inhaled deep into the lungs

•         Flavoring such as diacetyl, a chemical linked to a serious lung disease

For more information on the facts, risks, visit: www.e-cigarettes.surgeongeneral.gov/