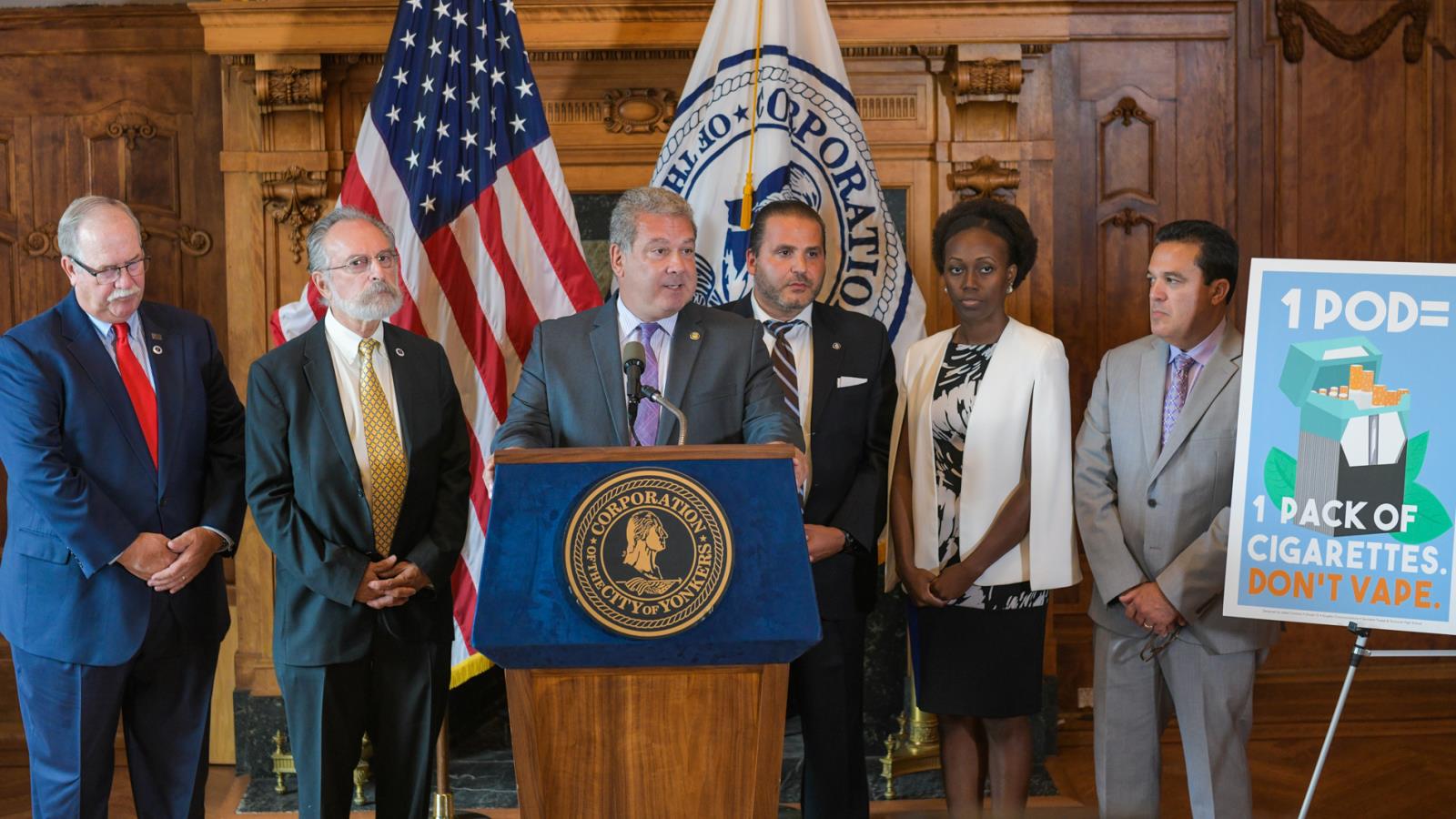 YONKERS, NY – September 5, 2019 – Yonkers Mayor Mike Spano and Yonkers City Council President today announced that they will submit legislation to the Yonkers City Council to ban the sale of flavored e-cigarette products. If approved by the Council, Yonkers would become one of the first big cities in the nation and the first in New York State to ban the sale of flavored e-cigarettes which are now widely accepted as an addicting gateway drug being targeted at youth.

“Nicotine poses very serious health risks to adolescents, and parents and health professionals are rightfully demanding action, especially since the State Health Department is reporting a growing number of cases where vaping is causing lung damage resulting in hospital stays,” said Mayor Spano. “Federal and state action is ultimately needed to effectively address this problem, but we will not wait to act while more of our children become addicted and sickened by e-cigarette use.”

Yonkers City Council President Mike Khader stated, “When a vaping company’s CEO tells you not to use their product, it raises a red flag. Aggressive marketing by big tobacco has introduced a whole new generation to nicotine addiction almost completely unnoticed. With flavors like bubble gum and ‘fruit loops,’ it makes vaping all too appealing to teens. That’s why I’m proud to stand alongside Mayor Spano, my colleagues on the Council, and the Board of Education in supporting a ban on the sale of flavored e-liquids in Yonkers. Let’s keep these products out of the hands of our youth, and start putting people before profits.”

The e-cigarette aerosol that users breathe from the device, and exhale can contain potentially harmful substances, including:

•         Ultrafine particles that can be inhaled deep into the lungs

•         Flavoring such as diacetyl, a chemical linked to a serious lung disease

“If we do not act now, we risk the health of an entire generation of young people who may become addicted to nicotine through the appeal of flavored e-cigarettes. We risk seeing more young people being treated for health problems due to the potentially serious negative impacts of e-cigarette aerosols. We also risk the significant progress achieved in reducing cigarette use and the associated health care costs for treating the diseases caused by cigarettes. Elected leaders and parents have a responsibility take action to protect our youth,” Mayor Spano stated.

The legislation submitted to the Yonkers City Council by Mayor Spano amends the City’s Consumer Protection Code to prohibit the sale or distribution of any flavored e-liquid or e-cigarette containing flavored e-liquid in the City of Yonkers. Characterizing flavors that would be prohibited for sale include, but are not limited to any fruit, chocolate, vanilla, honey, candy, cocoa, dessert, menthol, alcoholic beverage, herb or spice.

For more information on the facts, risks, visit: www.e-cigarettes.surgeongeneral.gov/