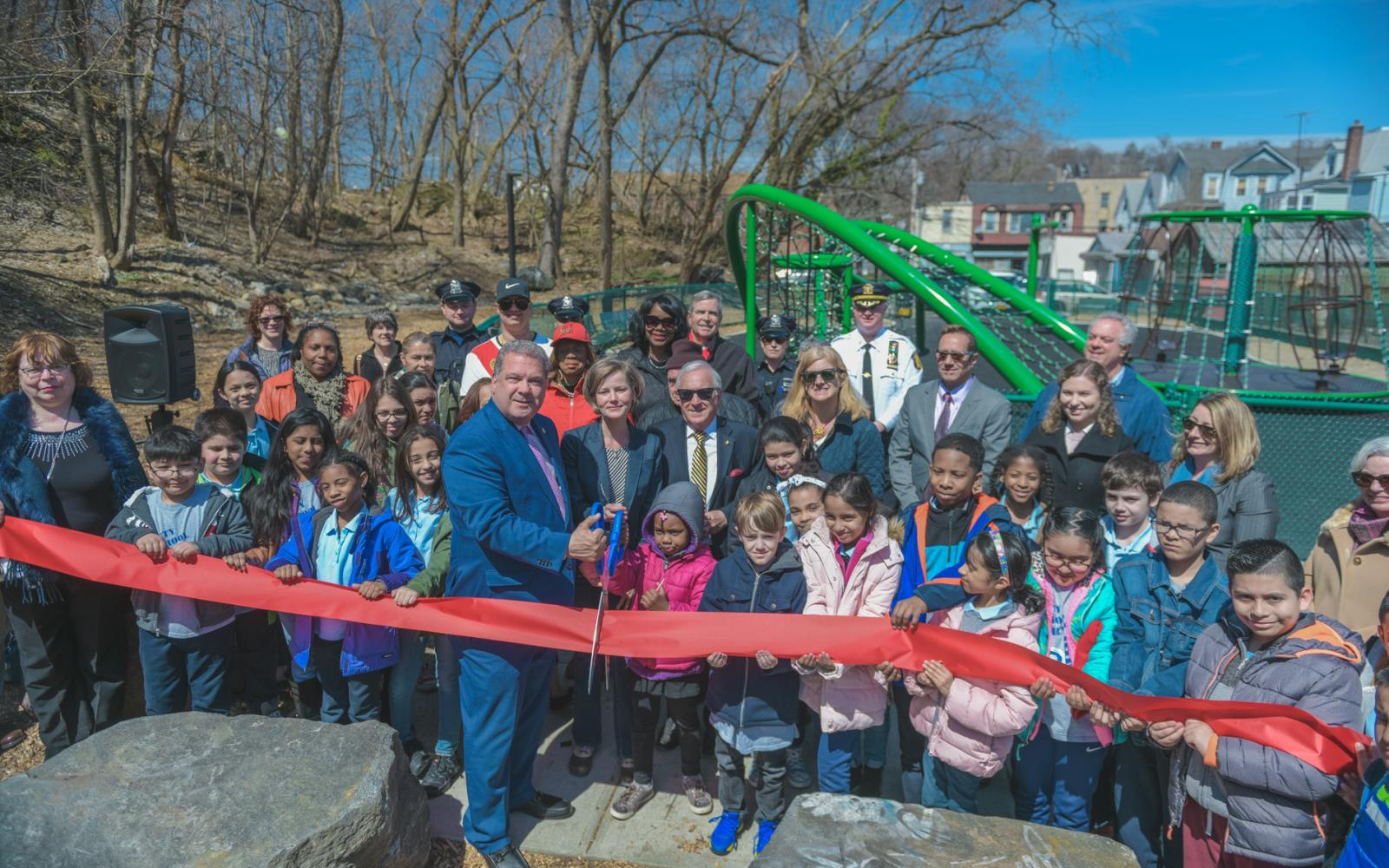 The Yonkers Greenway Playground, located in the city’s rededicated Smith, O’Hara, Levine Park, is a result of a public private partnership in an effort to transform the abandoned section of the Old Putnam Railroad into a revitalized park featuring art installations and gardens for community members to enjoy. The playground, created by Dynamo Playgrounds, will be the focal point of the Yonkers Greenway, a 2.4 mile walking and biking trail that will connect Van Cortlandt Park in the Bronx up to the Yonkers downtown train station.

“We have spent the last several years gathering input from local community stakeholders, conducting neighborhood and feasibility studies, and fundraising to bring this vision into reality,” said Mayor Mike Spano. “Our hope is that the Yonkers Greenway will have transformational impacts in the neighborhood to improve the lives of all of our community residents, and Yonkers as a whole. I want to thank all our partners in coming together for the betterment of our city and residents.”

The Yonkers Greenway Playground is a result of a partnership among local community members, state, corporate, and foundation partners and has been funded by the City of Yonkers, the Yonkers Community Development Agency, New York State Parks Department, EPA, Groundwork Hudson Valley, Impact 100 Westchester, Bank of America, the Ronald McDonald House Charities and the Westchester Community Foundation. Additional support for the rededicated Smith, O’Hara, Levine Park has been provided by the Greyston Foundation, the New York State Department of Environmental Conservation, and the New York State Department of Agriculture and Markets.

Groundwork Hudson Valley Executive Director Brigitte Griswold said, “Together with community, city, and business leaders, we have taken what was a visionary idea into a truly transformative reality that will have lasting impacts for decades to come. I credit that fact to the patience, determination, and shared ownership of all of the stakeholders who worked together over the past ten years to make this park possible.”

Acting New York State Parks Commissioner Erik Kulleseid said, “New York State has a proud tradition through the Environmental Protection Fund of supporting local and municipal park development.  Public parks, trails and gardens are an integral and vital part of communities, and I congratulate Groundwork Hudson Valley and the City of Yonkers for this achievement.”

Bank of America New York State President Jeff Barker said, “We are excited and proud to see the completion of the Yonkers Greenway Playground – the first phase of a momentous project providing vibrant green space for recreation, art, gardens and economic development. Public-private partnerships like this one are key to the future development and revitalization of our communities.”

The Yonkers branch of the Putnam Railroad ran from 1880 to 1943 between the old Polo Grounds in New York City and Getty Square in downtown Yonkers, which was instrumental to the early development of modern day Yonkers.  In the early 1960’s, the Lowerre Station area of the railroad was converted into the Smith, O’Hara, Levine Park in honor of three Yonkers World War II veterans.  However, by the 1980’s the park had fallen into disrepair. The Yonkers Parks Board recently rededicated Smith, O’Hara, Levine Park where the Greenway Playground now stands.

The complete Yonkers Greenway is currently being designed and is expected to be constructed by spring 2020.