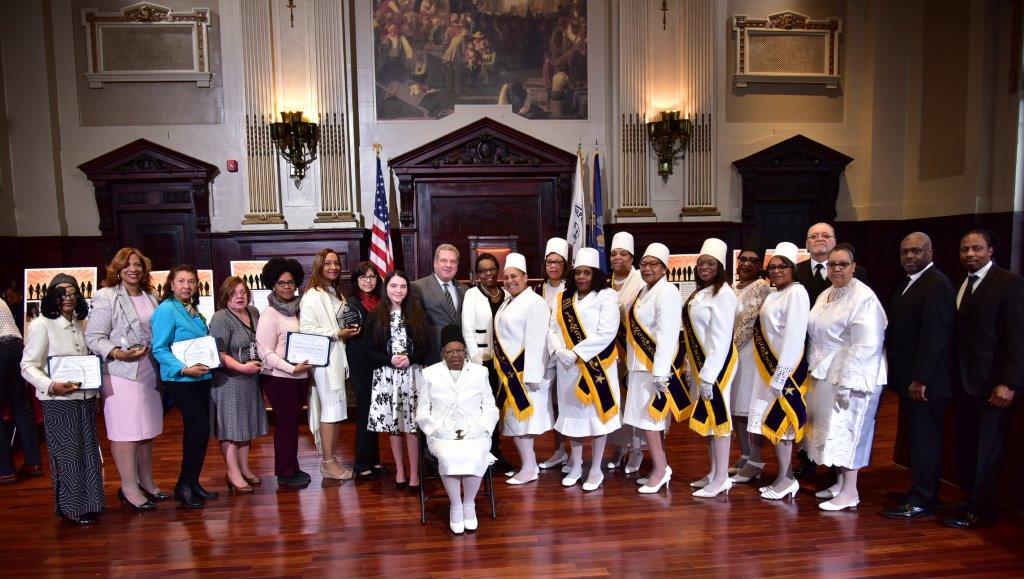 YONKERS, NY – March 29, 2019 – Yonkers Mayor Mike Spano presented “Women of Distinction” Awards to Yonkers women whose distinct achievements have improved the lives of others in the community and whose impact has changed Yonkers for better. In honor of Women’s History Month, Mayor Spano last evening presented the awards at a ceremony at City Hall.

“During March, Women’s History Month recognizes the historic accomplishments of women, and now it is Yonkers’ turn to pay tribute to the local leaders who either live or work among us each day,” added Mayor Spano.

This year’s honorees range in talent and service. They include:

Pilar V. Blanck – Blank is active in the St. Paul’s Dance Group where she often entertains seniors throughout the City of Yonkers. She volunteers with civic organizations, hospitals and nursing homes as well as remaining a member of the Bernice Spreckman Senior Center and Veterans Post 375.

Heather V. Burnett Gainey – Gainey is known for her community engagement and volunteerism in the City of Yonkers. She has worked with the African American Heritage Committee as Vice President, organizes parades and events including the Ragamuffin Halloween parade and the Juneteenth celebration, as well as Veterans events in various capacities.

Shawyn Patterson Howard - Howard serves as the President and CEO of the YMCA of Yonkers.  Shawyn was the first woman and person of color to lead the association when appointed in November 2008. She is the third African American woman to serve as a CEO in the 165 year history of the Y in the United States.  She is a community developer and connector. Howard and her team at the Yonkers Family YMCA are committed to confronting the social determinants that impact generational health, economics, education, poverty, workforce development, hunger.

Hayley Marie Quatrocci (Junior Woman of Distinction) – Quatrocci is a 13 year old who was born and raised in Yonkers, New York.  At the age of 9, she began the “Hayley’s Make-A-Witch Drive”, a community service initiative that has been a yearly tradition within the Yonkers Public Schools. To date, “Hayley’s Make-A-Witch Drive” has provided hundreds of costumes, books and goodie bags to students in her school district.  Quatrocci also serves coffee and cookies to our veterans, dignitaries, and community members at services held on both Veteran’s Day and Memorial Day.

Lucia Trovato – Trovato’s role in the city of Yonkers began in 1998 as a Community Outreach Coordinator in the Council President’s Office and later with two former Mayors. Trovato is known for bringing groups of school children to City Hall to demonstrate how city government works, to organizing different cultural groups receptions in City Hall, to writing proclamations that make everyone feel special and know that they are being honored. Lucia also has assisted in the Mayor’s Thanksgiving Care Drive, the Mayor’s Toy & Coat Drive and the Mayor’s Hispanic Advisory Board Three Kings Day Celebration.

“These women have demonstrated excellence, leadership and integrity within their community, serving as role models for other successful women,” stated Mayor Spano. “We should be inspired by these women and strive to make a true difference among our neighbors.”